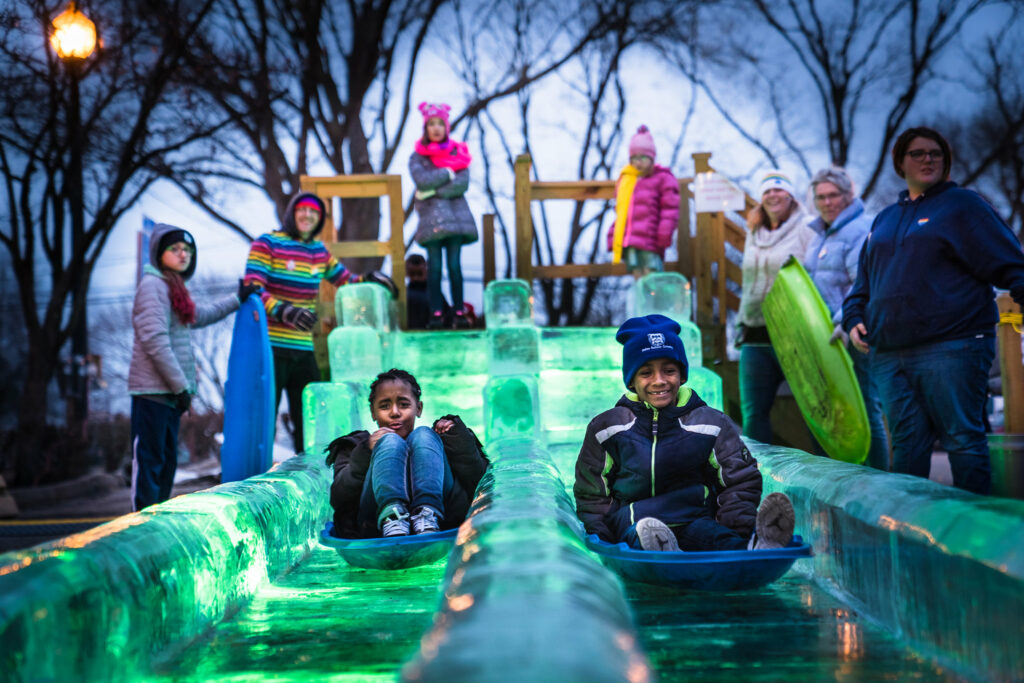 IceFest was established in 2003 to help the community combat the winter blues is entering its 20th incarnation. On January 27th through the 30th, more than 80 ice sculptures created by DiMartino Ice Co. will be on view throughout the downtown area. The more than 30 tons of frozen water will be made visible with LED lights after the early onset of darkness. The carvers’ talents will also be on full display with the double-wide ice slide in the parking area by 133 S. Main St.

A scavenger hunt will take place throughout the event, as will opportunities to watch huge chunks of ice be transformed into works of art. Food vendors will be set up downtown, and many shops and restaurants will be open for extended hours and offer specials to keep visitors fueled and their arms full of merchandise.

The first cancellation in the event’s history was in 2021, due to the COVID-19 pandemic, but even the worst weather has never stopped it.

“Mother Nature can be our biggest nemesis,” said Penny Shaul, co-chairwoman of the IceFest committee with Sam Thrush, president of Downtown Chambersburg Inc., and Tarryne West, executive director of Council for the Arts in Chambersburg.

Among the most noteworthy weather woes was the year 14 inches of snow fell on IceFest weekend; the year the temperatures were in the 60s and another year when it rained, both of which shortened the life span of the ice sculptures. None of those elements could stop about 20,000 people from descending on the downtown area over four days, year after year.

“The show still goes on,” Shaul said. “I feel like we’re due the perfect weather this year,” which she said would be temperatures in the low 30s, no wind or snow, and partly cloudy skies.

Shaul, owner of Here’s Looking at You at 123 S. Main St. in Chambersburg, has been involved with the festival for more than a decade and has watched it expand every year. The 2022 rendition will feature 17 giant sculptures, the largest number to date. Those giants – all of which are sponsored by businesses – come in four sizes: 3 feet by 6 feet; 4 feet by 10 feet; 6 feet by 10 feet; and 8 feet by 10 feet.

West is enthused about experiencing her first IceFest since taking the helm of the arts council in June 2020. She was part of the planning for the 2021 event, which never happened.

“It was a devastating decision,” West said of calling off the winter celebration when organizers determined the coronavirus was too much of a force to fight.

West said it takes seven months for the dozen members of the IceFest committee to map out the four days of festivities, which come to fruition with the help of hundreds of volunteers. The event is a coordinated effort of DCI, the Downtown Business Council and the Council for the Arts.

“It’s a huge, huge task,” she said. “It gives you a whole new appreciation for what’s involved.”

Preventing the spread of COVID-19 was part of the process, West said.

“We’re doing everything we can do to spread out the events” to prevent large groups of people from congregating in one place, she said. The format of some happenings is changing, too, including displaying the contenders in Icing on the Cake in downtown windows instead of collecting them all in The Wood Center. And the Snowfall Ball is taking place in a bigger venue with fewer attendees.

IceFest is a great way to showcase what Chambersburg has to offer, said Todd Shearer, vice president of M&T Bank, the presenting sponsor.

“It really highlights the Chambersburg downtown,” Shearer said. “It’s beautiful, the splendor. It allows people access, not only to the sculptures, but the businesses downtown.”

Shearer said he is proud to be part of the festival as a businessman and as a father of three sons, ages 19, 18 and 16. He said his sons still enjoy venturing out to IceFest, though they’ve outgrown one of their favorite attractions there.

“They’re getting too big for the ice slide,” he said.

Thrush has watched IceFest grow in the seven years he has been involved with it, first as a volunteer and then as president of Downtown Chambersburg Inc.

Despite the many hours spent away from his family during the event and the anxiety he feels while hoping none of the ice sculptures break, he knows it is a highlight of the year for downtown Chambersburg.

“We’re grateful we can do this,” Thrush said. “We can’t do this without the sponsors and the volunteers.”

Thrush also appreciates that when an individual or organization takes on an event, such as cornhole, they always take ownership of it and don’t require hand holding.

“We just provide space at the event and market it,” Thrush said of DCI.

Since the festival did not take place last year, its 20th incarnation is even more poignant, West said, and the vibe on social media is one of anticipation.

“People are really getting excited about the tradition … commenting on how they’re looking forward to it,” West said.

“I think the whole community really likes IceFest and loves what it does for Chambersburg,” Shaul said.

She often takes a walk around 9 or 10 p.m. the first night of the festival, when things quiet down, and soaks in the atmosphere.

“It is just such an amazing thing to look at,” Shaul said. “Our downtown looks so beautiful during Christmas and during IceFest.”

For more information and a detailed schedule, go to www.icefestpa.com or www.facebook.com/icefestpa.