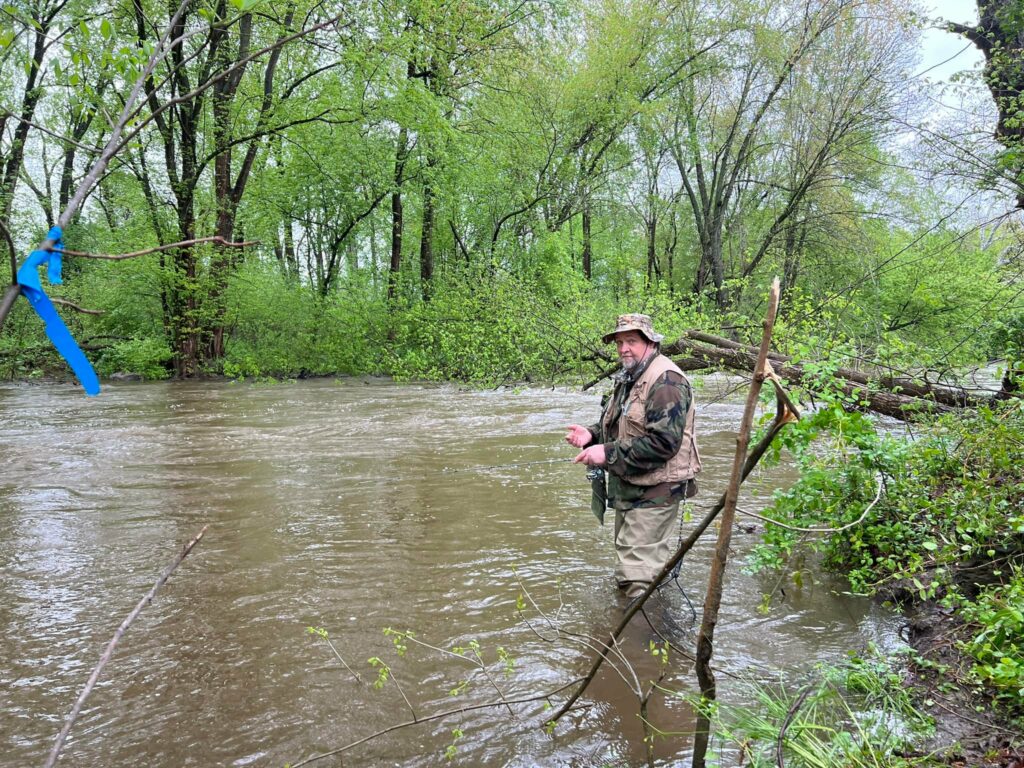 The 25th annual trout derby stocked as many tagged fish as in years past, but fewer participants caught fewer of those special fish, resulting in payouts much lower than in prior years. Raffle sales were also down, again thanks to less than optimum weather and fewer participants. Fast and cloudy waters due to a significant amount of rainfall Friday and Saturday made for some very difficult fishing.

That didn’t keep avid fishermen (women and children) from trying their skills in hopes of catching some of those special trout, and supporting the local Lions annual fundraising effort.

“We certainly have seen our fair share of ups, downs, twists and turns over the years; and this one was no different.” John Nogle of the Noontime Lions said.

The Lions were asked why they didn’t just reschedule the trout derby when they realized the area was going to get so much rain last week.

“Unfortunately, it’s just not an option to do that,” he said. “Permits take months to obtain and are specific to the requested dates. Tents, portable bathrooms, dumpsters, fish, food vendors and many, many more items all take time to line up and coordinate..” (They must be paid in advance,)

Rescheduling them on short notice just isn’t feasible. Even a week wouldn’t be enough time, he said.

In addition, he pointed to the many volunteers who work to make the fish derby successful. All are non-paid volunteers. Most have full time jobs. They do all of the planning for the derby in their spare time over the course of many months.

The Lions are challenged to get people lined up to work the event, even with several month’s notice. To change the date and recruit the help again would be very difficult.

The 25th annual trout derby had fewer participants this year and paid out less in prize money this year; but derby officers are talking about offering several several higher dollar fish in next year’s derby.

“We want everyone to catch fish, win money, have a great time, support this great cause, and come back again next year,” Nogle said.

The Lions heard complaints about the decision to hold the derby despite the bad weather; but they also received many complements from participants who chose to participate despite the rain and streams overflowing their banks.

Those complements and support are the reason the Lions keep sponsoring the annual Trout Derby, Nogel said.

“You are the reason we keep comimg back and doing this,” he said. “Your positive words of encouragement; the funny fish stories we hear; the smiling faces of both young and old, and the 100’s of little things that happen during the event make it such a special weekend for everyone.

“Would we rather have had sunshine vs. several inches of rain? You bet we would. But like you, we tried to make the best of it.”

So what does Chambersburg Noontime Lion’s Club do with the money raised from the derby?