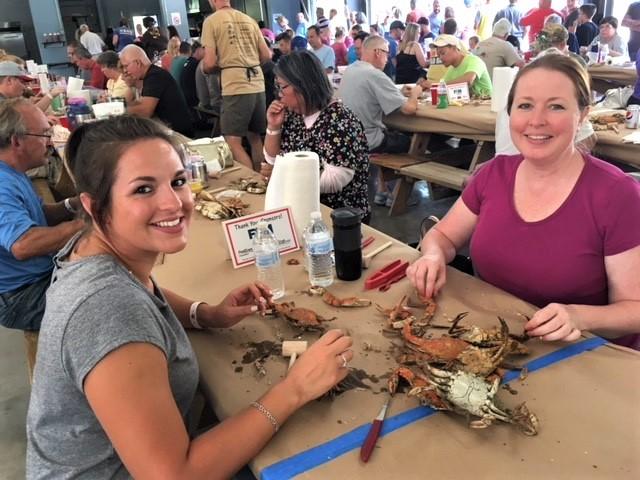 Bushels of deliciousness will be prepared for consumption when Crabfeast steams into Chambersburg on Aug. 27.

Approximately 40 bushels of crabs are expected to be steamed by Fred Knode, the man festival committee chairwoman Angela Quigley called the “Crab Guy,” who has been part of the event for more than two decades.

The tickets, which cost $60 for adults, $13 for those 12 and younger, include other food to fill empty stomachs and fuel attendees for the entertaining work of picking precious meat from as many crabs as they can muster. An assortment of beverages – alcoholic and nonalcoholic – will be on hand, as well as small games and raffles.

Making it a success

“As long as you plan well and advertise and really promote the event, you have a higher probability of success,” said Cullinane, who attends every year, donning a hat bearing the image of the honorary crustacean as he makes announcements and mingles.

“They’ve done an outstanding job over the years,” Thrush said of the committee leaders who organize it.

Since she started heading the committee in 2014, the profits for the feast have tripled from about $5,000 to $15,000. All the funds raised support the revitalization of downtown Chambersburg.

Crabfeast is a time for people of all ages to gather for a late-summer celebration.

“This event is a great place to mingle with many different people of Chambersburg,” Quigley said. “I encourage people to step out of their comfort zones and share a table with a stranger.  You will have a great conversation and meet new people. If you’ve always come to the event,  take this as the opportunity to rekindle old relationships or create new ones. This event is such a great place to engage with others while sharing a great meal.”

Cullinane said his grandchildren, ages 4, 8 and 11, are regulars at Crabfeast, as are others of all ages.

“We welcome families and it’s a great opportunity for people to have a social experience,” Cullinane said. “It’s a great event for young and old. There’s something for everyone. It really has been a fun, wholesome event for everyone.”

Quigley has similar enthusiasm from a volunteer’s vantage point.

“My favorite part, as a volunteer, is seeing all the work behind the scenes come to fruition in one single night.,” she said. This is one day that I get to serve the community differently than I do for my full-time job (as a CPA and member of the firm SEK, CPAs & Advisors, one of the event sponsors). I enjoy the accomplishment of hard work. After serving 450 individuals, I feel accomplished and blessed to be part of such a successful night.”

There’s a sense of accomplishment among ticket holders, too.

“People come with smiles on their faces and mallets in hand,” Quigley said.

For more information or to order tickets, email dci@chambersburg.org; or go to facebook.com/DowntownCburg/events or www.downtownchambersburgpa.com.