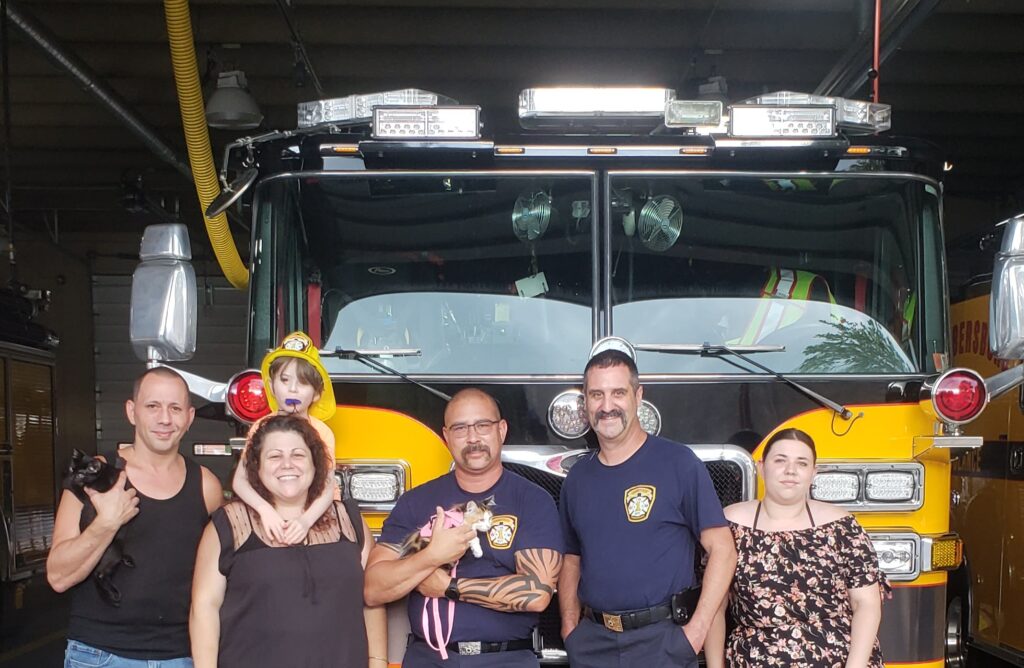 A tiny Chambersburg kitten has found a home!

On an early morning last month, Aleesha Asper and her  fiancé were  driving  to  work when all of a sudden they saw a tiny kitten fall out from beneath the bumper of a car in front of them at the corner of King and North Main Streets in Chambersburg.

While stopped at the red light, fiancé John attempted to catch the kitten. The couple was alarmed. They feared for the life of the tiny ball of fur. But the little kitten was feral, and obviously feared her human saviors.

No doubt in fear from the fall and in an unfamiliar place, trying to escape capture, the tiny kitten skittered across traffic toward the left side of the street. There, in front of the Council of the Arts building, she fell three feet into a drainage gutter.

The grate was locked, so Asper did the only thing left in the couple’s race to save the tiny kitten’s life.

“I knew I had to contact the fire department,” Asper said. “I made the call to the Chambersburg Fire Department and spoke with Captain Patrick Martin.”

“(Asper) thought the kitten might be down in a window well, but we couldn’t see it,” Martin remembers.

The art center wasn’t open, so there was no going inside to see if the little ball of fur might have wiggled inside. Since the incident had taken place of private property, the rescuers could not gain immediate access.

But neither Asper nor the first responders were ready to give up on the little kitten.

“At first, we could not find the kitten,” Asper said. “She was hiding, obviously terrified and shaken.”

Captain Patrick and his team went out of their way to call the owner of the Council of the Arts building to gain permission to open the building, conduct a search and retrieve the kitten.

“When we went back, we could see the kitten,” Martin said.

Such animal rescues are fairly common for local firefighters, who normally rescue multiple broods of little ducklings from storm sewer drains in the spring. The first responders arrive on the scene promptly when a report of trapped ducklings comes in. They carefully remove the grate, gently lift the little ducklings out and reunite them with their mother, who usually can be seen waiting patiently nearby. The mothers always appear calm and confident in the ability of the firefighters to rescue their large brood of ducklings. Normally such rescues involve about a dozen little ducklings, and firefighters diligently try to find every one of the baby ducklings.

Once the rescue is complete, the grateful mother and ducklings continue their journey, often through the middle of town, to the nearest waterway.

Unfortunately, the little rescued kitten had no mother and siblings waiting nearby for a happy reunuion.

Asper knew the little calico ball of fur wouldn’t last long on her own without other members of the feral feline community. Such rescues are a common occurrence in every city and state, she said.

The life of a community cat

Community cats can have between three and four litters of kittens each year. Each litter produces an average of 4-6 kittens. So the outlook for these kittens is not optimal, even if they don’t get separated from the feral community.

So Asper made a decision. After going to such lengths to save the kitten, she wasn’t going to abandon her. Instead, she named the little fur baby Beauty and took her home.

“We were very glad she was able to take the kitten and care for her,” Martin said.

“Many community cats are desperate for safe shelter at night and during inclement weather,” Asper said. “Too many are hurt or killed when hiding in or under vehicles in an effort to find safe shelter.”

There is currently a community cat population in Asper’s neighborhood 30 or more feral cats that she and her family tries to care for.

“I bought the house in the borough November 2021, knowing that kitten season was close at hand,” she said. “I began by reaching out to the volunteers at Forever Love Rescue in Gettysburg and Nobody’s Cats Foundation in Mechanicsburg for resources and help with TNR (Trap Neuter Return) of these community cats.”

The services the volunteers from Forever Love provide are arranging TNR surgical appointments as well as transportation to and from the clinic, along with staging/before and after surgery.

They transport the cats to the Nobody’s Cats Foundation. Here community cats are provided spay or neuter surgery, distemper, rabies vaccinations/ plus de-wormer and flea and tick preventative for $40 per community cat.

Before the cat is returned to the community, the tip of its left ear is then clipped. That process visually marks it as a neutered, vaccinated community cat.

“Unfortunately, I either had to cross county lines or state lines to have these services provided at this low cost,” Asper said. “These services are much needed in every community to control populations. It is critical to spay and neuter your pets as well as these feline friends that live in our communities.

Today, as Asper snuggles Beauty and watches her grow in a safe and secure home, she expresses gratitude to the Chambersburg Fire Company for saving Beauty and caring for humans and animals alike.

“They absolutely deserve the recognition for this rescue,” she said.

READ: Meet Jett and Sasquatch, pets of the week