SU women's basketball: A win and a loss for Raiders 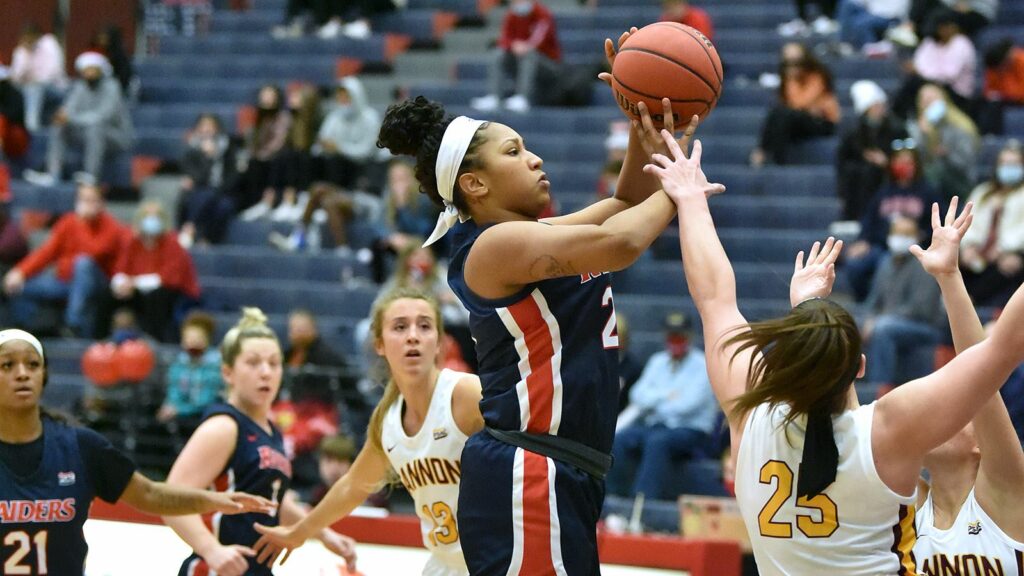 A win and a loss marked Shippensburg University’s last two December games for its women’s basketball team this weekend. The Raiders defeated Pitt-Johnstown Saturday, then lost to IUP on Sunday. Both were road games.

The team held Pitt-Johnstown to 14% shooting in the fourth quarter to defeat the host Mountain Cats 69-61 in a Pennsylvania State Athletic Conference (PSAC) mandated crossover at Sports Center.

The Sunday match saw the team drop a 79-46 decision at No. 8 IUP in a Pennsylvania State Athletic Conference (PSAC) matchup at the Kovalchick Complex.

The team has a 7-4 win-loss record so far this season.

SU opened the game with a 7-0 run, but UPJ came back to take a one-point lead at the end of the first quarter. The Raiders had an 11-6 run in the last five minutes of the second quarter to lead 31-29 at halftime. SU’s eight-point victory margin was its largest lead of the game, while UPJ’s largest lead was five points in the third quarter.

Senior Destiny Jefferson (Scranton, Pa./West Scranton (West Chester)) led the Raiders with 23 points, marking her fourth consecutive game of 20 or more points this season and her sixth this season. Jefferson was 6-of-9 from the free-throw line and led the team with three steals. She also recorded one of her two blocks in the game with 22 seconds remaining.

Junior Aunbrielle Green (Harrisburg, Pa./Central Dauphin East) had herself a day with a career high 14-of-16 performance at the free-throw line. She surpassed her season total (12 free throws) in Saturday’s game alone; and she doubled her previous single-game career high of seven free throws achieved twice previously.

Green finished the game with her first double-double of the season, totaling season highs of 20 points and 12 rebounds. Her 20 points are one short of her career high. She also added two steals and one block.

Pitt-Johnstown was led by Peyton Alazaus with 22 points. Alazaus made all five of UPJ’s three-pointers.  Ashley Norling had 12 points and nine rebounds. Olivia Fasick had seven points, seven assists and four steals.

The Shippensburg University women’s basketball team played its second road game in as many days on Sunday but dropped a 79-46 decision at No. 8 IUP in a Pennsylvania State Athletic Conference (PSAC) matchup at the Kovalchick Complex.

The Raiders committed just six fouls in the game compared to 26 by the Crimson Hawks. SU shot 70 percent (21-of-30) at the free-throw line.

The hosts were led by Courtney Alexander’s 31 points. Alexander set an IUP school record by going 9-of-16 from three-point range.

Shippensburg will now break for the holidays and return to action in the new year. Its next game is at 6 p.m. on Wednesday, January 5 against Seton Hill at Heiges Field House.