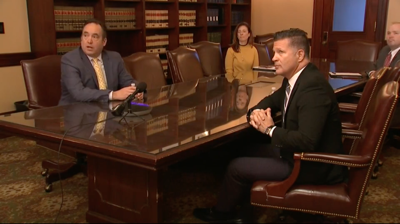 Auditor General Eugene DePasquale said Thursday his office will audit the business waiver program implemented during the coronavirus pandemic as tensions flare among Republicans over the administration’s unwillingness to reveal more information about the process itself.

“The question we need to find out is, could more businesses have been open in light of staying safe with social distancing, and were they essential to make sure we were providing services that were needed – and was this done in a fair process,” DePasquale said during a news conference. “This may not be the last time Pennsylvania has to confront something like this. We want to make sure we as a state and as a country are better prepared moving forward.”

The announcement comes – somewhat coincidentally, he said – two days after Senate Republicans asked for an audit of the process as complaints from shuttered businesses continue mounting.

“I had said when the pandemic was done … there were certain things we’d review. This is something that is certainly in our wheelhouse,” DePasquale said. “But I’m not going to sit here and tell you that [letter] had no impact on our office doing it. The question was always about timing.”

Last month, Gov. Tom Wolf said businesses forced to close amid the coronavirus pandemic could apply for an exemption through the Department of Community and Economic Development. The agency received more than 42,000 requests in the two-week window that closed April 3. More than half of those were approved, or it was determined no exemption was needed, DCED Secretary Dennis Davin said.

Senate Republicans have pushed – repeatedly – for the administration to publicize the list of waiver applicants after complaints about unfair and illogical denials flooded their district offices. Sen. Mike Regan, R-York, in his capacity as majority chairman of the Veterans Affairs and Emergency Preparedness Committee, set an April 29 deadline for the DCED to produce the list and about a dozen other documents detailing the agency’s process for approving and denying waivers – an ultimatum that went unanswered.

“Legislative action may be necessary to correct these inequities, both as part of the ongoing pandemic, as well as for any future emergencies,” Regan said during a committee meeting Thursday. “In order to determine the necessity, scope and terms of any legislative action, it is essential that the legislature have access to relevant information regarding the requests for waivers and the administration’s response.”

“The governor even mentioned that maybe this may be the best way to go,” Senate Majority Leader Jake Corman, R-Centre, later told reporters. “All we are looking to achieve in this was what was the criteria used to determine that some businesses were allowed to be open and some were not.”

DePasquale reiterated that Wolf has signaled his administration will cooperate with the audit.

“He made it very clear that his team is going to very open and that his team would give us everything we need to do an independent, thorough investigation,” he said.

Senate Minority Leader Jay Costa, D-Allegheny, criticized Republicans for going forward with the subpoena despite the impending audit, calling it “an incredibly wasteful, offensive and political.”

“A duplicative review of the same program and information is a waste of taxpayer resources and takes our administration’ s officials away from fighting COVID-19,” he said. “As the United States crossed 60,000 deaths from COVID-19, Senate Republicans called a last-minute Senate Committee meeting to try to attack the Governor who has decisively and steadfastly led our state through this outbreak.”

Regan signed two subpoenas — one for the governor and a second for DCED — after his committee voted 7-4 on Thursday to move forward with the process. No Democrat supported the motion.

“This subpoena is not about transparency,” said Sen. Lindsey Williams, D-Allegheny. “It is about a political stunt. It is about driving up to Mount Wolf and serving a subpoena on the Governor with a camera crew in tow.”

October 25, 2019
Thanks for subscribing! Please check your email for further instructions.