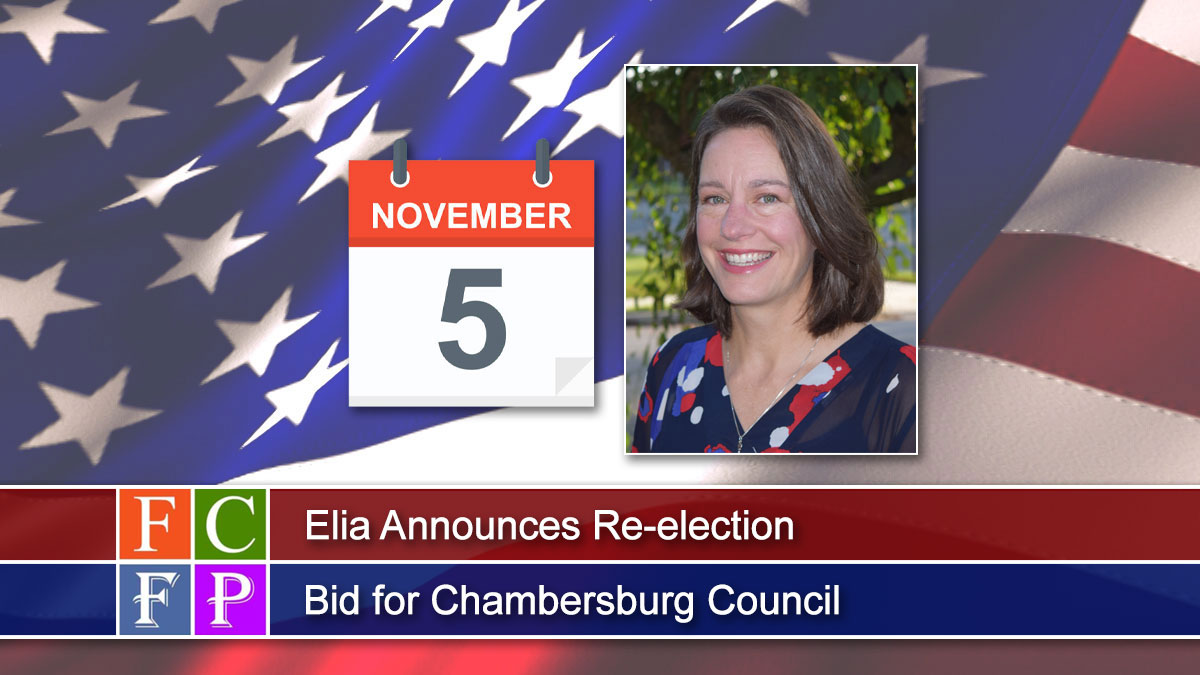 She said she doesn’t think political party affiliation is a big factor when running for a local government office.

“I tend to stress to people that political party doesn’t play much of a role in local government,” she said. “We are represented by our neighbors and our neighbors, ideally, care about the neighborhood in which they live.”

She said her commitment is to the borough and her neighbors in the First Ward, and cites her community service and experience on Council as qualifications for the office.

She doesn’t see too many critical issues facing her constituents right now.

“Mostly what I hear from people has to do with traffic,” she said of issues in her ward. “I have a good relationship with the Police Chief and we are often in communication about issues throughout the Borough, including traffic.”

She said the Chambersburg Police Department and Mayor Walt Bietsch are always responsive to issues regarding safety in the borough.

“I think that’s good for all of us,” she said. “They are committed to keeping the borough a healthy, thriving place.”

Elia won her first political office in November 2015 as a Borough Council representative from Ward 1. She took office January 4, 2016.

She serves on several local nonprofit boards and volunteers in activities affecting the community and her ward.

She also volunteers with the Duck Derby and CrabFeast, both of which support DCI.

As a Council member, she is on the Recreation Advisory Committee, where she helped shape recreational improvements in the Borough.

She is proud of her involvement on that front.

“The strides the borough has made in improving its recreation facilities has improved the quality of life here,” she said.

She points to the addition of a new park in her ward, the new Chambersburg Aquatic Center, new playground equipment in all parks, and improvements to the Eugene C. Clarke Jr Community Center and public tennis courts as important projects achieved during her term on Council.

“I am helping create the Borough’s plans to improve Storm Sewer maintenance and quality of water runoff to reduce pollution to the Chesapeake Bay,” she said of that position.

In January 2018 Elia became Council vice president. She calls the role of a borough council member one of her most important community roles.

Elia has lived in Chambersburg since 2006, when her family moved here for her husband John’s job at Wilson College, where he is an associate professor.

The Elias have two children, a son Thomas and daughter Julian. Thomas graduated from Chambersburg Area Senior High School last year and is currently spending the year in Hamburg, Germany.

Julian is a Sophomore at CASHS.

Alice Elia grew up in Miami, Florida, and has a bachelor’s degree in psychology, with a minor in human services, from Carson-Newman University. Her educational credits also include a master’s degree in education from the University of Texas at Austin.

She is the Director of Advancement and Publicity for the Franklin County Library System. She also works part time from home as a freelance proofreader.