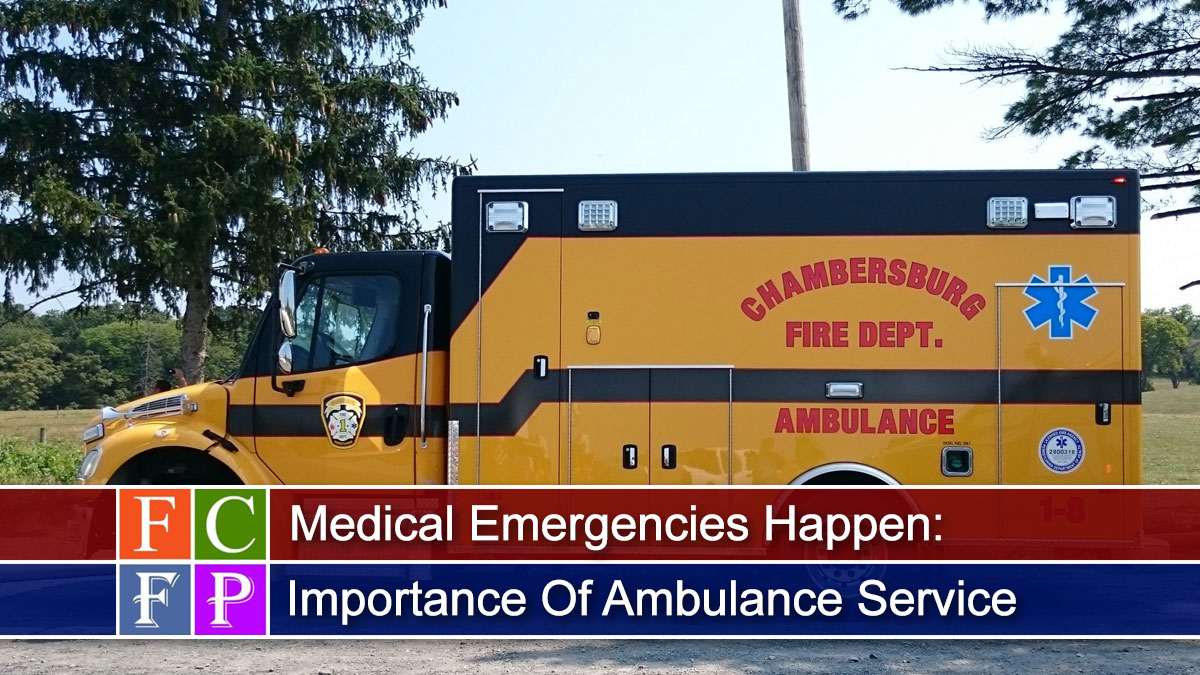 Medical emergencies can happen anytime, anywhere, to anyone. When they do, most people reach for the phone and call 911.

At those times, it is critical that they get help as quickly as possible.

He cites a recent call as an example of the importance of such a service to borough residents.

On the morning of Sept. 9, Chambersburg Fire Department’s ambulance rushed to the Fresenius Dialysis Center for a patient in cardiac arrest.

Within four minutes after dispatch, the ambulance was on the scene.

By the time the ambulance arrived at the local hospital, the victim’s heart was pumping blood to vital organs again. The patient spent two weeks recovering in the hospital. He had no complications from a serious cardiac event, thanks to the quick response and availability of a borough ambulance.

Other stories could be told, probably hundreds, that highlight the need for around-the-clock ambulance service in the community.

Borough Manager Jeff Stonehill says almost everybody will need an ambulance and trained medic at some point, however.

A paid ambulance service is vital to the well being of the community, he said, and as important to borough residents as the municipality’s paid fire and police departments.

Yet ambulance services both in the borough as well as around the county and the state are struggling to stay in business, Stonehill and Ulrich said.

Ulrich blames part of the crisis on Federal mandates on what ambulance companies can charge Medicare and Medicare for their services. A lot of private insurances flow the same formulas, he said.

“Unfortunately there is a gap between what it costs us to operate (an ambulance) and what insurance pays,” he said. “We lose between $1.7 million and $1.8 million from write offs a year.”

The gap increases every year as the community’s needs increase. The number of calls grow 2-3% each year. The borough’s ambulances answered 3,200 calls so far this year alone.

Two years ago the borough added a half mill ambulance tax to the borough’s real estate tax, in hopes of easing that gap. It hasn’t been enough to make a significant difference, Stonehill said.

He proposed repealing that half-mill tax in 2020’s budget and adding a $7 ambulance fee to the borough’s utility bills.

It would not only be fairer, he said but would raise more revenue to keep the borough’s ambulances running. And it would raise an additional $847,000 to close that cost-income gap.

Stonehill and Ulrich are not sure the new fee will completely stop the bleeding, so to speak. But they say it is the best solution to keep the service running in the short term.

“The $7 (fee) is extremely crucial so we can continue to operate our ambulance service,” Ulrich said. “In emergencies, seconds matter, and people expect a quick response in a time of need. It’s important to be able to provide this service.”

Stonehill told the borough council in his budget message last week that he isn’t sure the fee will be enough. But he said right now it is the best solution to a problem that will surely grow in the next few years. He said any shortfall in 2020 will be covered by reserves in the general fund.

“The world of EMS is in flux, but we do not see any reason not to stay the course,” he said. “Many believe the entire EMS system is on the verge of collapse.

If that happens, he said because of the borough’s willingness to use taxes and fees and commitment to professionalism, borough residents will still have an ambulance service.

“While no one wants to pay a new fee to support the ambulance service, it is increasingly important,” he said. “There are no alternatives.”

Stonehill isn’t content to sit back and watch the county’s and state’s EMS system suffer a fatal cardiac arrest, however.

Last week he urged the borough council to support initiatives in Harrisburg to reform and change the EMS system in Pennsylvania.

Those rules, which are often debated in Congress, are hurting EMS services across the nation, he said.

A public hearing Monday night will give borough residents a chance to ask questions and provide their views on the budget. The meeting starts at 7 p.m. in Council chambers.