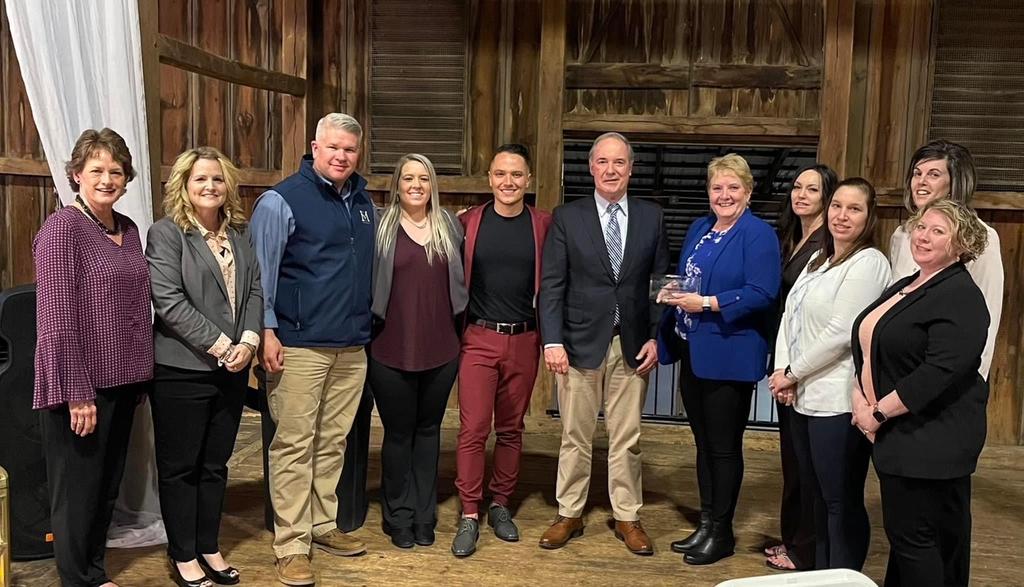 The Tuscarora Area Chamber of Commerce held its annual awards dinner on Tuesday, April 12th. Over 120 business and community leaders gathered to help the Chamber commemorate the achievements of area businesses and organizations. The event was held at The Goldfish Barn & Event Center.

TACC Chairman and Mercersburg Borough Manager Derek Stoy welcomed everyone, especially after a two year hiatus of the annual event, due to the COVID-19 pandemic. He spoke about Chamber goals for the future and encouraged attendees to remember the “mom and pop” shops and businesses when making purchases. Sherri Stahl, Vice President for WellSpan Health, the event’s sponsor, spoke about the organization’s commitment to health, the community, and living in the Tuscarora region.​

TACC Executive Director Chris Ardinger, presented the first award of the evening, Volunteer of the Year. “This individual has helped with everything from setting up vendors at 5 AM for Townfest, helping
with administrative duties, decorating the town Christmas tree, to much more; she is a huge asset to our Chamber and community. Currently, she is employed at the Mercersburg Moose Lodge and the
American Legion Post 517. If you haven’t figured it out by now, our award winner is Kelani Monismith Craig.”​
​
Next on the agenda was the Not for Profit of the Year, which was presented by Janet Pollard, Franklin County Visitors Bureau Executive Director. Pollard stated that the organization is 53 years old and was originally formed with 23 charter members to oppose the proposed 1% wage tax in Montgomery Township. She went on to say that early fundraisers of the organization included building and maintaining school bus shelter boxes; today, they support area non- profits, local fire and ambulance companies, individuals, schools and other community needs. They also hold tractor pulls, pot pie suppers, and an annual Gas & Steam Show (bringing in thousands of visitors to the county).​
​
With a few more teasers, Pollard announced that the recipient was the Two Top Ruritan Club. Franklin County Commissioner John Flannery accepted the award on behalf of the organization, as the club holds
monthly meetings on the same evening as the dinner.​
​
The nominee for Business of the Year has been in Franklin County for over 22 years and is very active in serving the agricultural community, among many other personal and industry sectors. Congressman John Joyce presented this award and spoke about the community-minded nature of the business, its ownership and employees alike. They support several area non-profits and events, and strongly believe in giving back and helping the communities in which they live and work.​
​
Rep. Joyce went on to say that the business has two office locations and is adding a third location in Adams County later this month. They employ 10 individuals, serve 9 states, and several employees are in the process of learning Spanish to better serve the needs of the Hispanic community in their service region. They are also very active in the Insurance Alliance Network.​
​
It was clear soon enough that the 2022 Business of the Year was PDM Insurance Agency. Rita McMullen, President of PDM was joined by her family and the PDM Insurance team to accept the award. McMullen
thanked her team for making it all possible and remarked about how much they enjoy serving their clients and the community.​

Business Person of the Year

The highest commendation that the Tuscarora Area Chamber of Commerce presents each year is the Business Person of the Year. This award is given to a person who is unselfishly committed to the business
community.​
​
Ardinger remarked that the award recipient could not join them for the dinner, as this individual was traveling overseas; however, the award will be accepted by the daughter and son. The nominee grew up
on a family farm, just outside of Mercersburg, and graduated from James Buchanan High School in 1971. Eventually, this person also obtained degrees from Shippensburg University and Cincinnati College
of Mortuary Science.​
​
The award recipient married the love of his life, Crystal 35 years ago and they have three children together and several grandchildren. In this person’s career, time has no bounds, and many family meals,
church functions and vacations have been put on hold due to being a phone call away (or multiple phone calls away). His family means the world to him and he has spent his life trying to instill the good habits of honesty, integrity, faith, the love of God and family, and hard work in his children and grandchildren.​
​
The business that this individual is involved with was started in 1910; he became a partner in 1989, full owner in 2002, and most recently sold it to his son at the end of last year.​
​
As son, Jacob and daughter, Rachel came forward to accept the award, it was evident that the 2022 Business Person of the Year is Alan Fries from Fries Funeral Home. Jacob and Rachel described their
father’s dedication and struggles in being a funeral home director dealing with the COVID-19 pandemic. After a few joyful tears, they read a note of thanks and appreciation from Alan in receiving the award.​
​

As the evening concluded, Ardinger thanked attendees for coming out to celebrate the success of the Tuscarora area businesses and organizations, and thanked WellSpan Health for being the event TACC Awards Dinner sponsor and The Goldfish Barn for hosting.