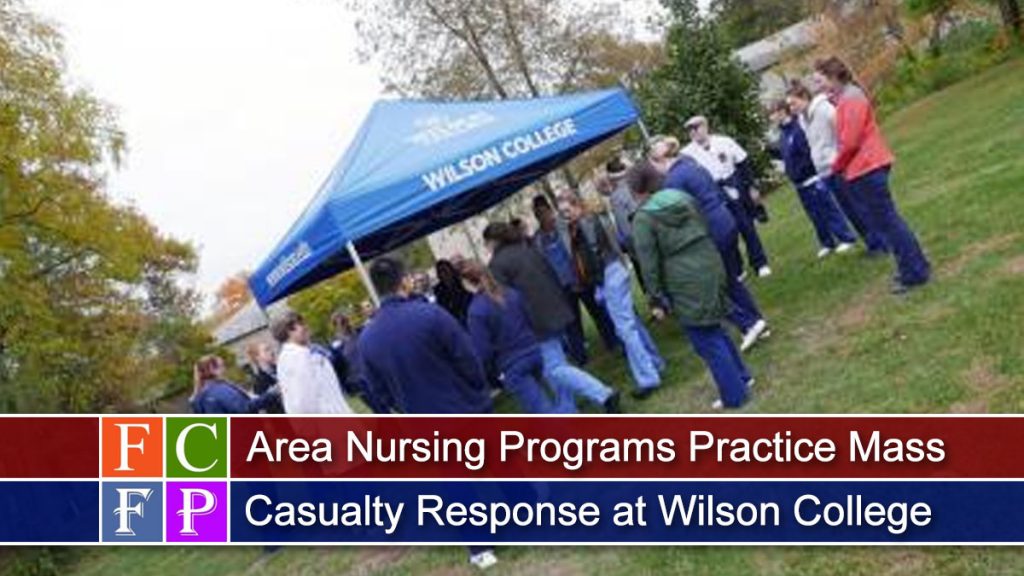 It was a mass casualty scenario where, with help from local community emergency response crews, students practiced assessing and treating “victims” of a mock shooting.

The day began with speakers in the morning, followed by the simulation in the afternoon. Nursing students from the Wilson, Penn State Mont Alto and HACC-Gettysburg nursing programs and the Franklin County Career and Technology Center’s (FCCTC) Practical Nursing Program formed four groups with assigned roles.

Students drew different assignments for the day’s exercises. Some played the part of specific injuries, from gunshot wounds to chest pain, dislocated shoulder and lacerations. The rest acted as healthcare professionals treating the victims.

Local police and emergency medical technicians (EMTs) were on hand to provide the feel of a real-life mass casualty event.

After the simulation, students evaluated their responses and discussed what they learned from the exercise.

Amanda Seese, a HACC nursing student and one of the group leaders, said the exercise was valuable in giving students hands-on training for a real disaster. “I do think this was a great clinical day,” Seese said. “And it was nice to work with other colleges and people we’re not used to working with.”

Miranda Rhodes, a Penn State Mont Alto nursing student, found the opportunity to work with students at other schools especially helpful. “As much as the topic of the simulation is really important, because active shootings are something we have to deal with now, I think the fact that we got to do this with other schools is equally important,” said Rhodes, a group leader. “If you’re in a mass casualty situation, you’re not going to know everybody that you’re working with.”

Kelli Ellerman, an FCCTC LPN student and a group leader, said the simulation was worthwhile because it forced those participating to use critical thinking and judgment skills. “I thought it was a good learning experience,” she said. “You have to think on your feet when you go out there. There’s no one holding your hand.”

Wilson Chief Nursing Officer Julie Beck came up with the idea for the simulation. Planning has taken more than a year.

“This is an exciting day because this has never been done before,” Beck said. “For the first time we are having a collaborative simulation being performed at Wilson College using the varied educational backgrounds of all nursing students in the area coming together.”

The nursing programs that participated in the simulation provide different levels of education. Wilson and Penn State Mont Alto offer bachelor’s degrees in nursing, HACC has an associate degree program in nursing and FCCTC trains LPNs (licensed practical nurses). Because graduates of the programs will function at different levels in the real world, Beck believes it’s important to bring them together for an exercise like the simulation.

“Many times there is this idea of almost like a caste system in nursing,” she said. “I feel strongly that if these students are going to be graduating from our local programs, it’s really important for them to get to know each other before they’re actually at the bedside. Everyone should learn what we do in a situation like this, no matter what their program.”

Students said they appreciated the chance to work with counterparts at other schools. “I think it made it more realistic,” said Sarah Gipe, a senior in Wilson’s nursing program and one of the group leaders.

“We all will work together at some point,” said Tara Harmon, another Wilson nursing student and team leader. She said It was advantageous working with other students in different nursing programs.

“We got to work with LPN students and see what they do, and they got to see what we do, she said. “We all bring something to the table.”

The day began in the morning with breakfast and registration in Wilson’s Laird Hall, followed by educational sessions and speakers. Topics included the nation’s opioid crisis, managing an active shooter and an overview of a national program called “Stop the Bleed.” Students learned a method of triaging patients called SALT. They later used that during the simulation. SALT stands for sort, assess, life-saving interventions and treatment/transport.

The simulation was low key because it was the first such exercise. Nursing officials plan to hold future simulations at the participating schools on a rotating basis.

Wilson’s accredited nursing program launched in fall 2014 with bachelor and master of science degree programs for existing registered nurses (RN-to-BSN and RN-to-MSN). Subsequently, bachelor’s and master’s degrees in nursing and a bachelor’s program for LPNs were added. Nursing has quickly become the college’s most-enrolled field of study.

Penn State Mont Alto’s nursing program is part of Penn State’s College of Nursing. The program became accredited in 1991, at that time as an associate degree. Today, the campus offers two nursing degrees: a bachelor’s degree and an RN-to-BSN.

HACC’s Gettysburg Campus has offered an associate degree in nursing since 2004, graduating 629 RNs and 95 LPNs since that time. HACC, Central Pennsylvania’s Community College, has five campus locations, including Gettysburg, and is the largest of Pennsylvania’s 14 community colleges.

The FCCTC Practical Nursing Program, which opened in September 1958, is an accredited, one-year, full-time program. The program has two classes each year beginning in either March or August.

Tawna enjoyed gardening, motorcycle outings, and spending time out at the farm with her friends. She loved singing karaoke at the club.

Glenn loved to hunt and fish, and especially loved learning about the Civil War, going to Gettysburg often with his friends to explore.

Robert was a loving and caring husband of Alfreda for 74 years, and a loving father, grandfather, son, brother, neighbor, and friend.

Joe was born January 8, 1937 in Scotland, PA to the late Edward and Bessy (Gontz) Furry. He was a veteran of the U.S. Airforce.

Florence was born on September 22,1926, a daughter of the late Mervin and Edna (Beaston) Hockenberry. She attended Christian Life Assembly, Camp Hill.