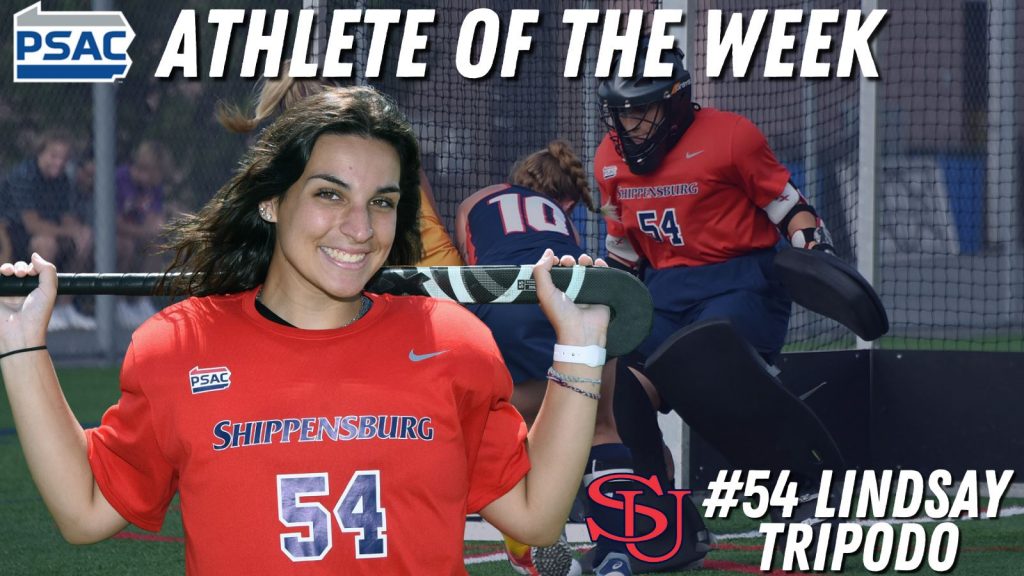 Tripodo totaled six saves this past week as Shippensburg shut out No. 2 West Chester, 4-0, and dispatched No. 5 Kutztown, 2-1. Her shutout against the Golden Rams was her second solo shutout of the season.

She was the final stop in a Shippensburg defense that allowed just one goal and eight total shots on goal over the course of two games. SU defeated nationally ranked teams, among the Top 5 in the country, in those games. SU also got two defensive saves from its defenders in the win over Kutztown.

It is the second time this season that Tripodo has been named the league’s Field Hockey Defensive Athlete of the Week, accompanying an honor on Sept. 13.

It is the sixth time overall this season that a Shippensburg University player has received a weekly award from the conference. Jazmin Petrantonio was the PSAC Field Hockey Athlete of the Week on Sept. 6 and Sept. 20; and Jenna Sluymer received the award Monday and on Oct. 4.

Sluymer scored two goals in both of Shippensburg’s wins this week – a 4-0 win over No. 2 West Chester and a 2-1 overtime win at No. 5 Kutztown. She once again scored the game-winning goals in both matches; Sluymer is credited with the game-winning goal in four straight Shippensburg wins. Sluymer also extended her goal-scoring streak to a career-best seven straight games.

In Saturday’s overtime win at Kutztown, Sluymer scored in the first quarter and caged the overtime golden goal on a penalty corner.

In Tuesday’s win over West Chester, Sluymer scored the first goal with 2:50 left in the first quarter and added another with 8:41 left in regulation.

It is Sluymer’s second straight week to win the award and the third of her career. She was first selected for the award as a freshman on Nov. 6, 2018.

It is the fourth time this season a Shippensburg University player has receivedthe PSAC Field Hockey Athlete of the Week. Jazmin Petrantonio received the honor on Sept. 6 and Sept. 20.

It is the sixth time overall this season a Shippensburg University player received a weekly award from the conference. Goalkeeper Lindsay Tripodo is this week’s PSAC Field Hockey Defensive Athlete of the Week. She was previously recognized on Sept. 13.