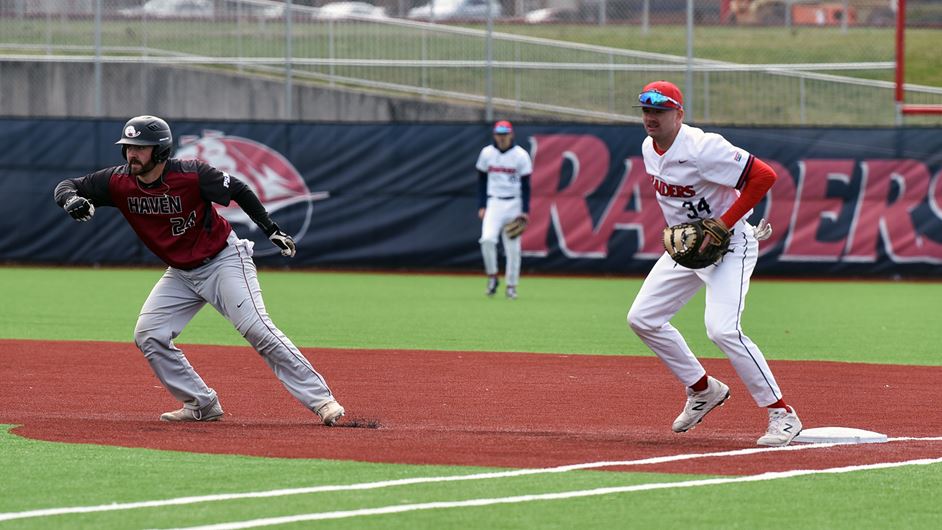 The Shippensburg University baseball team rallied in both of its games on Saturday to complete a series sweep of Lock Haven, defeating the Bald Eagles by scores of 6-1 and 9-5 in Pennsylvania State Athletic Conference (PSAC) Eastern Division action at Watkins Field.

The Raiders will be back on Wednesday for a single game against Frostburg State at 3 p.m.

Lock Haven (7-19, 1-11) took the lead in the second inning with an unearned run on a fielder’s choice. It was the only blemish against junior Noah Nabholz (Pottsville, Pa./Pottsville), who threw a complete game and allowed just three singles and a walk while striking out three in an efficient 76-pitch effort.

SU scored three times in the fifth and the sixth to take control. In the fifth inning, freshman Carter Hinds (Warrington, Pa./Central Bucks South) tied it with an RBI-single. Senior Ben Werkheiser (Doylestown, Pa./Germantown Academy (Delaware)) gave the Raiders a 3-1 lead with a two-run double.

Lloyd hit a bases-clearing, three-run double in the sixth to create the final score of 6-1. Sophomore Joe Barbera (Harrisburg, Pa./Bishop McDevitt), Hinds and Shilling each finished the game with multiple hits.

Shippensburg trailed for much of the game and did not score until the seventh inning. Graduate JuJu Cason (East Arcadia, N.C./North Brunswick (Belmont Abbey)) got the Raiders started with a triple to right field and was brought home on an RBI-single by Lloyd that made the score 3-1.

SU tied the game in the top of the eighth inning after an RBI-double by Shilling and an RBI-single by Byler, but the Bald Eagles retook the lead with two outs in the bottom of the eighth on a two-run home run by Joe Shannon.

The resilient Raiders scored six times in the top of the ninth inning to come from behind and win. Sophomore Andrew Chronister (Dover, Pa./Dover Area) hit a two-run double to tie it at 5-5 as Werkheiser and junior Justin Darden (Mountain Top, Pa./Crestwood) scored almost simultaneously on a bang-bang play at home plate.

Cason then snuck in a single that gave the Raiders a 6-5 lead. Lloyd added another run on an RBI-double and then Byler hit a no-doubt two-run home run to cap the scoring.