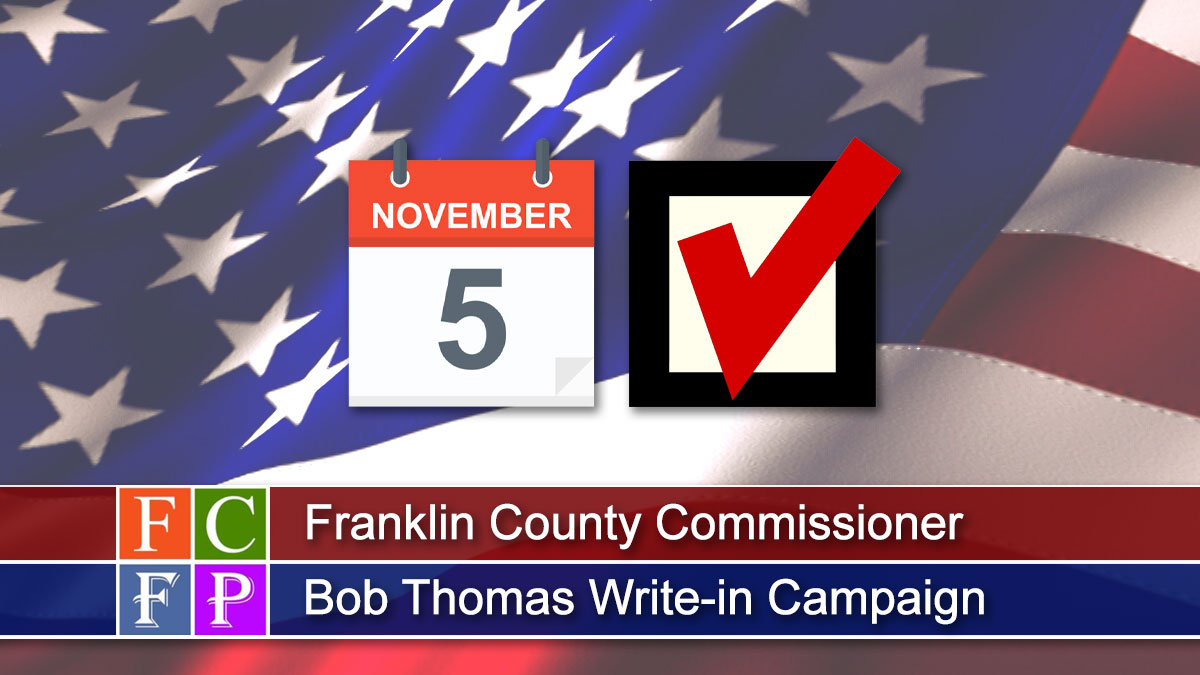 “I have been close to the community all my life including my years in broadcasting as well as my time as commissioner,” Thomas said in his reelection announcement. “I know the people of the county, I understand the issues and I am actively engaged in the community.”

“Growing up in rural Franklin County, I’m friends of agriculture and understand their issues. As a former firefighter and EMT, I know the plight of the emergency services and am actively engaged. I’ve been a friend of Letterkenny for almost three decades and am very active on Team Letterkenny and the LEAD Historical Committee.”

Thomas said that since May’s primary election he has heard from hundreds of voters — Republicans, Democrats, and Independents — who told him they were disappointed with the results.

“So many have encouraged me to do this and are willing to help with the write-in campaign. I am aware this will not be easy, but with their help, a grassroots, issue-oriented campaign might just work!”

Besides the overwhelming community support, Thomas’ main reason for running is that he finds it very difficult to give up on issues important to Franklin County.

“Early Education, especially pre-natal to 3 years is important to me,” he said.

As a member of the County Commissioners Association of PA (CCAP) Board of Directors for many years, Thomas lobbied for the formation of an Election Reform Committee. He was named its first chair and I’ve been advocating for election efficiency and fairness ever since.

Issues include support of ICE

One issue very important to Thomas is moving the deadline for returning absentee ballots.

“Currently, if an absentee vote is not returned by Friday 5 p.m. before the election, it will not count,” he said, calling it “critical” to have every vote counted.

On the state level, Thomas was the first commissioner from Franklin County to ever serve as President of CCAP.

“As president, my top priority in 2016 was the formation of the Behavioral Health Task Force. Too many people are in PA jails due to actions caused by Mental Illness or brain disease,” he said.

This committee identified the issues and came up with solutions. We have succeeded and our work has led to much reform and sharing of best practices for all 67 counties in PA to follow. Because of our success and the importance of this issue, today the Behavioral Health Task Force is a standing committee at CCAP and one of the most active.”

“I’m still in contact and have developed a list of reform measures that will not just rehabilitate but will also save tax dollars,” he said. “Because of this, a team from the White House ‘Office of Innovation’ will be coming to Franklin County soon to hear from local partners in Justice and Re-entry.”

In May of this year, Stephen Amos, Chief of the Jails Division of the National Institute of Corrections came to Franklin County jail to see up close the county’s Medication-Assisted Treatment (MAT) program. Amos oversees the national MAT program and wanted to see why Franklin County Jail has some of the best results in the nation for opioid use disorder.

“I’ve worked with ICE and directly with Simona Flores, Field Officer for PA, DE, and WV,” Thomas said. “Because of the relationship counties have with ICE, I asked her to speak with the County Commissioners Association of PA at the summer conference.”

“She also commended Franklin County for the great job we are doing cooperating with ICE,” he said.

Flores will be in Franklin County on the near future to meet with Jail, Probation and Police Chiefs.

“I’ve been working with the White House and PA counties to encourage their Congressmen and Senators to support USMCA, an agreement that will level the playing field for trade between the US, Mexico and Canada,” Thomas said.

“Our county’s farmers need this to open new markets. Our manufacturers like Manitowoc, JLG and Volvo will also benefit and create more jobs for our workforce.”

Thomas said his work in transportation to create and then chair the Franklin Metropolitan Planning Organization (MPO) gives the county a voice in determining how federal and state transportation tax dollars are spent in Franklin County.

“This has yielded many benefits,” he said. “Perhaps our biggest success will soon pay dividends when the traffic lights in the greater Chambersburg area get synchronized. Traffic will flow better, with less frustration for the traveling public and there will be less pollution/emissions from idling cars.”

About I-81 and water issues

On the subject of Interstate 81, Thomas said that as one of three PA representatives on the I-81 Coalition Steering Committee, he just this week advocated for a phone app that would alert travelers to delays and closures on the interstate, both short and long-distance.

“There is nothing worse than getting stuck in traffic on an interstate,” he said.

Regarding water issues (MS-4 and WIP-3), he said EPA and PA DEP have mandated fewer pollutants (phosphorus and nitrogen) get into the waterways.

“This is a very heavy lift, to say the least, he said. “My goal is to get every municipality to cooperate and collaborate with a single team of professionals to implement a working plan and maximize efficiency.”

“Earlier this year, I coordinated a meeting with top EPA officials and local planning and Conservation District staff. We discussed the need for reform and less regulation and we provided many examples of how the current process slows down all projects and increases the cost to taxpayers.

In 2020, the US Census will be taken in Franklin County and across the nation.

Thomas said that if his write-in campaign is successful, his goal will be to work closely with Census, municipalities and civic organizations to ensure everyone in the county is counted.

“An undercount in a growing county like Franklin will cost us millions of dollars in lost federal money and less representation in congress,” he said.

Thomas is supported by locals like Dan Whaley, Past President of the Penn National Home Owner’s Association.

“Bob Thomas’ experience and knowledge of local, state and federal governments, the important issues and finding solutions in a timely matter gives him a unique qualification, more than any other candidate,” he said. “If you know Bob, you know he’s very passionate about serving his community and making a difference.”

“My goal has always been to make Franklin County an even greater place to live, work and raise a family,” said Commissioner Thomas

Prior to public life, Thomas was a radio broadcaster for over 20 years, serving in various capacities including General Manager of the former WKSL radio, Sales manager at WIKZ and station manager at WCHA. In 1993, Thomas was elected to Chambersburg Borough Council prior to his first election as commissioner in 1995.

Thomas and his wife Sherryl have been married for 38 years. They are active members of the Marion United Methodist Church, where Bob is Lay Leader and Sunday School Teacher.

Bob and Sherryl have twin daughters, Bobbie Brown (husband Chris) of Hamilton Township and Kelly Thomas of Enola and one grandson, Aiden Brown.