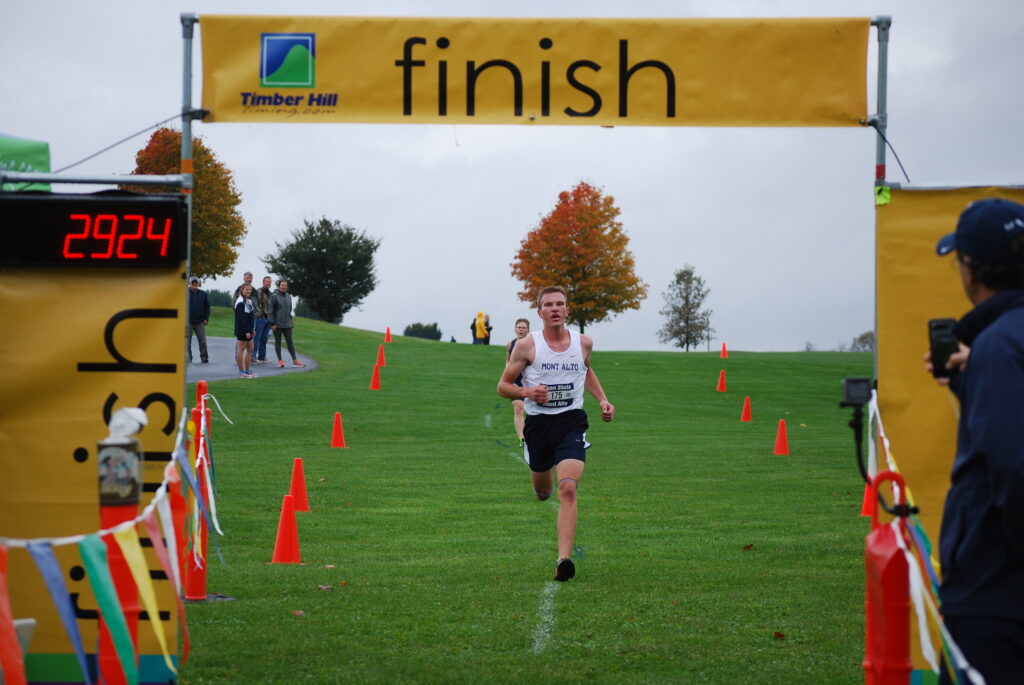 Runner Gabriel Brandt had a breakthrough freshman season at Penn State Mont Alto this fall. It ended a few short weeks ago, as the United States Collegiate Athletic Association named him their male Runner of the Year.

The Penn State Mont Alto cross-country runner came in second place in the Pennsylvania State University Athletic Conference’s 8k race at Norlo Park in Fayetteville on October 30. It was his next to last race of the season; and he finished the race with a time of 29 minutes and 27 seconds. It was his best 8k time of the season.

Two weeks later, Brandt and his teammates headed to Virginia Beach, VA. There they competed in the USCAA Cross Country National Championships. He finished 19th in the race with a time of 30 minutes and 44 seconds; his second best of the season. The road to success, however, didn’t come without some setbacks for Brandt.

Brandt started running when he was a seventh grader at Shippensburg Middle School in Shippensburg, PA. Two years later, he was the fastest runner on his freshman team. The highlight of that season was finishing eighth in the 5k during the Carlisle Invitational; where he recorded a time of 17 minutes and 42 seconds.

“Then I entered a little bit of a slump my sophomore year and I did not have the best cross-country season,” Brandt said. “After a lot of winter training, I had a better sophomore track season and broke the sub-five-minute mile mark.”

The training helped Brandt strive for his full potential. Following his sophomore campaign, he was ready for a more productive junior season. He went on to beat his personal record in the 5k that year, running a time of 17 minutes and 33 seconds.

The 2020 season: Unlike all others

The COVID-19 pandemic in March 2020 stopped the track season mid-stride. Like many other athletes around the area, there was a distinct layer of uncertainty surrounding the future of athletics.

Brandt lost the motivation to run in the summer of 2020 following his junior season with so much unknown regarding upcoming seasons. The season did take place, but it was unlike anything Brandt had ever been a part of.  Overall, it was a major setback for everything he had worked for all his life. The 2020 spring track season had Brandt contemplating if he would ever run again.

Brandt had a lot to reflect on during his first few months at Penn State Mont Alto; and he had created many memories.

“My best memory here at Penn State Mont Alto outside of athletics was playing pool with friends during breaks from class. My best memory within cross-country was the trip to Virginia Beach for the National Cross-Country meet. Many great memories and stories were made during that trip,” said Brandt.

READ: Sensenig to be honored at PSUMA

Next season, he wants to help lead Penn State Mont Alto to a team championship. By improving his times and working everyday to get better finishes, he hopes to instill these qualities on the rest of the team so that they can live up to their potential.

For Brandt, his teammates have always played a huge role in his success; it was always fun to motivate others to do well. By joking with each other, it kept practices loose at times, but the end goal was always in sight. He credits his friends and family with helping in their support over the years.

“Brandt is a well-rounded addition to our team.  I appreciate his work ethic (academic and athletic) and support of his teammates,” said Geesaman. “He understands when to work harder and when to work smarter.  This allows him to go into every race with a solid plan that while achievable, also pushes him to his limits.”

From starting out as a seventh-grade track member for Shippensburg Middle School to USCAA Male Runner of the Year, it has been quite the ride for Gabriel Brandt. “I am honored to be named the USCAA runner of the year as a freshman. It means a lot to be recognized for my effort on and off the course,” said Brandt.