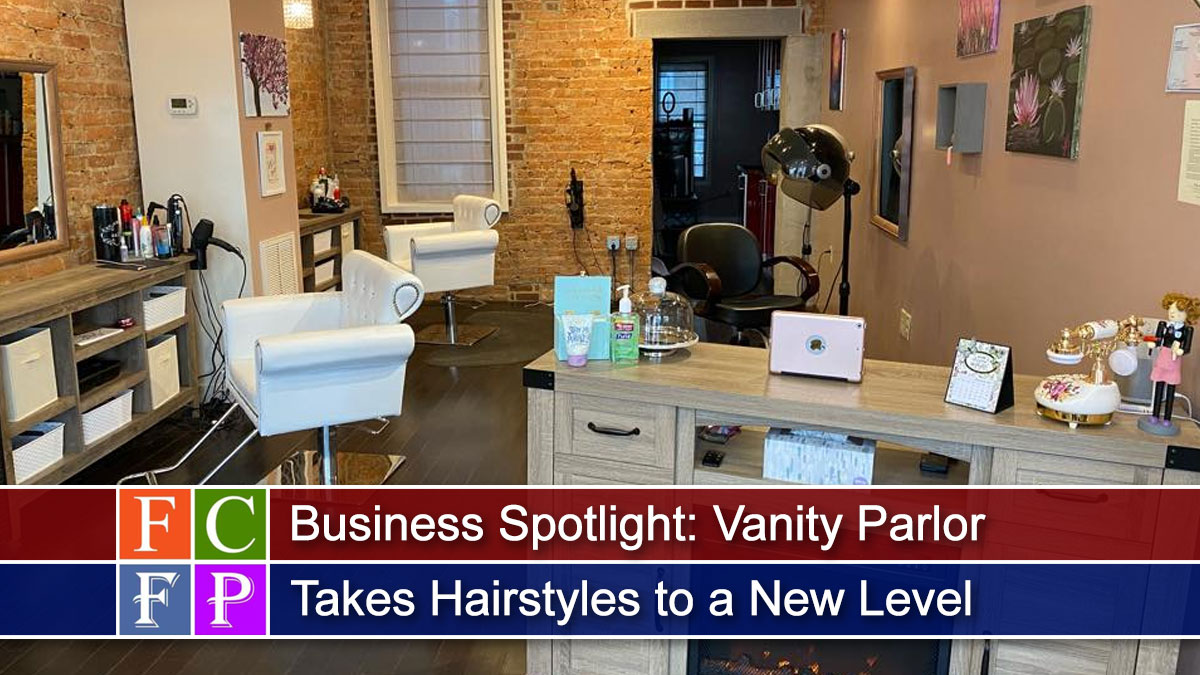 The sky’s the limit – and sometimes the inspiration – for the beauty options at Vanity Parlor in Chambersburg.

The hair salon at 75 N. Main St. officially opened Dec. 11 under the ownership of Jenna Keller and Korie Groft. They are master stylists with more than 30 combined years of experience making people feel and look their best.

Keller brings to her work the influences of styles and colors she has seen on humans and in nature during her travels in the United States and well beyond. She has one client who gives her free license to use her hair like a canvas, on which she can paint anything she chooses.

“Whatever’s in your head, put it on my head,” is the invitation Keller said that the individual gives her.

With that in mind, she once tried to re-create the colors of the Northern Lights on the woman’s tresses. She became obsessed with the multishade display – created by collisions of gas particles in the Earth’s atmosphere with charged particles from the sun’s atmosphere – after visiting Iceland and Canada.

Keller and Groft enjoy also balayage, a technique that involves painting highlights on hair, which Keller said mimics the way sunlight naturally changes the hue of a person’s mane.

Other services, priced for the budget-conscious, include facial waxing and haircuts. For instance, eyebrow waxing cost $12, while a root touch-up costs $54 and a basic color and cut runs $85. Intricate hair coloring, which often involves multiple steps, can cost more than $200.

A common request is for color corrections, often the result of people trying to change their hair shade by themselves. Keller understands people want to save money by taking a do-it-yourself approach. But she believes in the power of pampering oneself and the skill of cosmetologists, who are trained in chemistry and electricity, among other things, to properly treat hair, skin and nails.

There is no room to squeeze spa services into Vanity Parlor’s 550 square feet of space, but Keller sees potential for the business to grow.

“We’re getting new clients every day,” she said.

Keller and Groft met while working at Bombshell Salon in Chambersburg, which closed in May 2019.

“From the first day, we were the best friends ever,” Keller said.

When Bombshell closed, they took their shears and dyes to Inside Out Salon in Chambersburg before deciding to go out on their own.

All of their clients – Keller estimated a couple hundred – followed them to Inside Out, then to Vanity Parlor. She attributed that loyalty to the camaraderie and friendship developed by styling just 5 feet away from her business partner. The close proximity allows them to get to know each other’s clients, and for the clients to become acquainted with each other.

It’s been seven or eight months since she and Groft have had time to style each other’s hair, which they sometimes do between cutting and coloring the locks of their patrons.

“We trust each other to the core,” Keller said of their confidence that each will do justice to the other’s appearance.

Keller enjoys her free time with her husband, Andrew, and jumping out of planes. After spending the weekdays making others feel good about themselves, she recharges by skydiving, alone or with friends.

Chambersburg native Groft, 33, likes to spend her time outside of work with her husband, Sam, and 11-year-old son, Jackson.

Keller’s path to Chambersburg was circuitous. Among the states she has called home are Alabama, Arkansas, Iowa, Tennessee and Texas. She ended up in Pennsylvania after her husband, an Army helicopter pilot, finished flight school and was sent there.

She brought with her the styling influences of the domestic regions in which she’s lived, as well as concepts and colors she saw on heads and in nature while traveling in Austria, Canada, the Caribbean, the Czech Republic, Germany, Iceland, Ireland and Prague.

“It’s almost like an inspiration book,” Keller said of observing hairstyles and hues.

While her worldly experiences are vast, Keller appreciates the hometown feel of downtown Chambersburg.

“Everyone’s been so nice,” Keller said of neighboring businesses and community members. “It feels like everyone has each others’ backs.”

She has seen the downtown business community grow since the salon opened near the end of 2019, led by a new generation of business owners who are enthusiastic and energetic.

“If one of us is thriving, all of us are thriving,” Keller said.

Downtown Chambersburg Inc. President Sam Thrush appreciates Vanity Parlor’s ability to attract men and women with discretionary income who also might visit nearby businesses, such as clothing stores and restaurants.

He said the downtown business community is a collaborative one.

“We try to have a family environment,” Thrush said.

Book an Appointment with Vanity Parlor

Local entrepreneurs talk about surviving a pandemic, and thriving