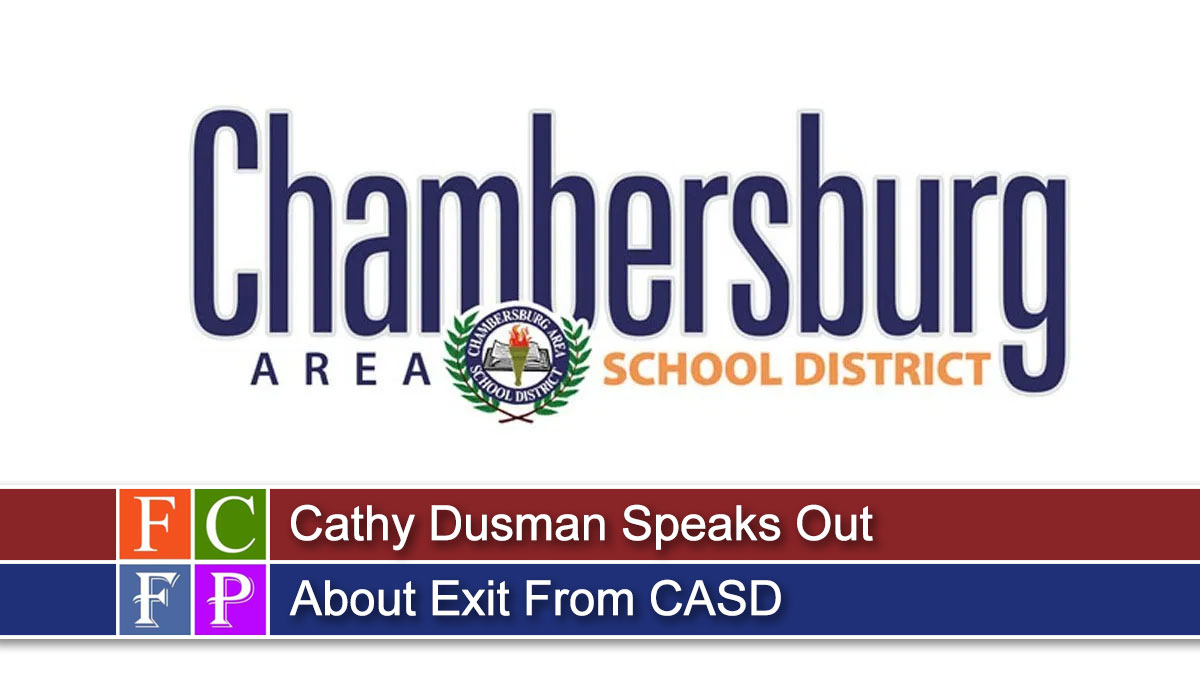 Cathy Dusman was “extremely surprised” to hear her contract with Chambersburg Area School District was not going to be renewed when first told about it a few days before it appeared on a school board agenda last month.

“I was honestly under the impression things were going very well and we were finally focused on making sure our priority was on the success of our students,” she said in a recent interview.

She said it seemed like change was in the air after Dr. Dion Betts became superintendent last summer.

So when Betts and Director of Human Resources Karen Gokay told her the non-renewal of her contract was going to be on the next board agenda, Dusman was surprised.

“He (Betts ) clearly said it had nothing at all to do with my performance,” Dusman said.

The school board voted 5-3 Nov. 19 not to renew Dusman’s contract.

Gokay told Dusman the agenda item and subsequent vote was related to changes in school code. She was told she could reapply for the position.

“I didn’t plan on doing that,” she said.

“I planned to continue to do my job to the best of my ability and give it 100% until my contract ended. I believe the students, staff and families deserved that.”

That contract expires July 31, and Dusman continues to be paid by the district until her contract runs out.

Dusman’s supporters, including former school board members Joan Smith and Alex Sharpe, question Gokay’s excuse that the non-renewal issue had to be addressed in November under new school code rules.

Sharpe, a local attorney who had just won reelection to the school board and was serving as the board president, resigned on Nov. 13, just days before the issue came before the board.

He said some board members used the fact that his father represented Dusman in lawsuits against former Supt. Joe Padasak and the school district to shut him out of several personnel meetings, even when they had nothing to do with the lawsuits.

”I talked to Karen and she didn’t give me a straight answer (about the reason the issue was being addressed in November instead of next spring),” he said. “I talked to Dion and felt the same way. He claimed he could not do his job without Cathy and that it had nothing to do with her performance. He couldn’t explain his justification or reason for making this personnel decision so quickly.”

After hearing Bill Zee say he wasn’t sure Dusman had a future with the current board, it all made sense to Sharpe. Zee is an attorney with Barley Snyder, the firm that represents the district as its solicitor.

“The decision wasn’t about the law. It was personal. She wasn’t getting her job back,” Sharpe said.

He said he decided he was tired of being shut out and excluded from meetings he felt he should have been able to participate in. So he resigned.

“I guess I just got tired of the politics and the lies,” he said.

“What are you supposed to do when you feel like the people Who work for you are lying to you?”

Smith, a two-term school board veteran, was reelected to a third term in November. She resigned after voting against the non-renewal motion.

She didn’t buy into the claim that the issue had to be resolved in November because of changes to the school code.

“It was early,” she said. “They could have waited until spring.”

Both Sharpe and Smith called the timing of the vote “very suspicious.”

Sharpe said he felt it was put on the Nov. 19 agenda because former board member Bill Lennartz had been defeated in his bid for reelection in November.

“The school code changed and only required 90-day notice instead of 150 for renewal of an assistant superintendent,” he said. “But this was the last meeting in which Lennartz would be able to vote. The timing of this was very suspicious.”

It was politics, Smith said, and she decided she was tired of the political games.

“I was just sick of what happens (on the school board),” she said. So she resigned.

“Dion said it had nothing to do with (Dusman’s) performance,” Smith said. “He said it was just awkward having lawsuits against the district and giving her a new contract.”

Smith and Sharpe felt that was a pretty lame excuse.

Sharpe & Sharpe, LLP — the firm headed by Alex’s father Jack Sharpe — represents Dusman in still-unresolved lawsuits that have played out over the years in Franklin County Court and various courts of appeal.

Sharpe said he was not involved in any of the discussions or decisions related to the litigation because his father is the attorney handling those issues on behalf of Dusman.

Dusman filed the first lawsuit in 2013, after then Supt. Joe Padasak recommended the school board change her title from assistant superintendent to director of early childhood development. Once the lawsuit was filed, she was reassigned in pay and title to the coordinator of the district’s cyber school program.

Dusman considered it a demotion. A Franklin County judge agreed with her and ordered the school district to reinstate Dusman to assistant superintendent. The district appealed and lost. The legal battles, which now span seven years, continue with the next court date coming up in March.

After the district lost the appeal, Dusman was reinstated. She is now listed on the district’s website as assistant superintendent, although she no longer has a district email associated with her name. Instead, the email [email protected] is listed for her.

Dusman said in a recent interview that although it was difficult working for Padasak over the years, she focused on the students, which made her work worthwhile.

A Contract… or Not?

At one point the district said she didn’t have a valid contract, resulting in more legal action.

Dusman said she leaves the district with a heavy heart because CASD has been her life as a former student, teacher, and administrator. But she refuses to leave with bitterness in her heart.

“I’m very thankful for the 27 1/2 years I’ve had to make a difference in the lives of CASD students,” she said. “I harbor no ill-will toward this community or the school district. I’m just sorry it ended this way.”

Dusman is credited with helping bring a number of positive changes to the school district.

Dusman said the changes came about with the support of many dedicated and student-centered individuals working with her. Smith agrees, but she said Dusman spearheaded those projects.

“There truly was no one in the administration that was as passionate as Cathy about the well-being of the students in the district,” Smith said.

She lists the following as Dusman’s accomplishments:

Vicky Taylor - March 30, 2020 0
The Pennsylvania Department of Health today announced 693 additional positive cases of COVID-19 Across the state, bringing the statewide total to 4,087 in 59 counties. One of those is in Franklin County and two are in Cumberland County.