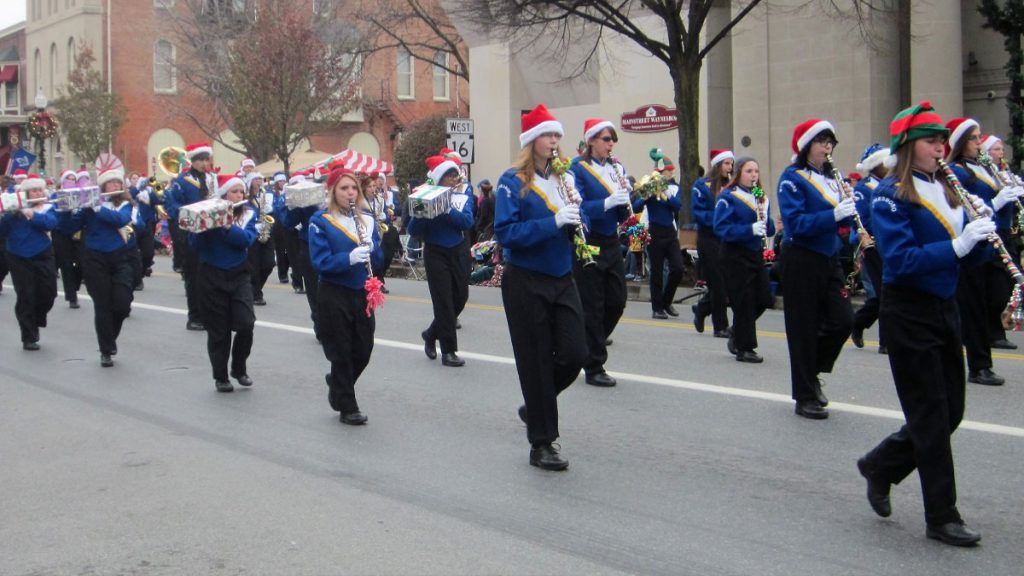 Christmas parades around the county officially kick off the holiday season across the county. In fact, families can spending their whole day next Saturday at parades if they wish; and they can even get some shopping in between parades.

The Christmas parades start in Greencastle Saturday morning, move to Waynesboro in the afternoon and to downtown Chambersburg that evening. Each will feature an appearance by Santa, seasonally themed floats, marching units and bands.

Santa will arrive in Waynesboro in a sleigh pulled by the Rouzerville Lions Club; he will ride into Greencastle on a float and take the traditional Christmas train in the Chambersburg parade.

Each community also puts up and decorates a holiday tree that stays in place throughout the season. Lights are officially switched on the evening before or during the annual Christmas parades. The trees are usually community trees donated by local residents.

Greencastle’s Christmas Parade starts at 9:21 a.m. Saturday. The parade forms at  Greencastle-Antrim High School on Ridge Avenue; it then travels down Route 16 (Baltimore Street) to the Square and turns left on South Carlisle Street. The parade ends at the American Legion.

Music will be provided by the Greencastle-Antrim High School Band and the Tri-M National Honor Society, Chapter 4755. The event includes a sing-along of traditional carols, along with the ringing of Christmas bells provided by Antrim Way Honda.

The lights on the tree include Lights of Love, sponsored by Blaise Alexander Chevrolet of Greencastle, and the names of those honored will be on display on scrolls in the windows of the Cumberland Valley School of Music and Fran Kenawall State Farm Office located in Center Square.

Waynesboro’s 64th Holiday Parade will step off at 2 p.m. Saturday from C.V Avenue on the west end of town. The parade moves down Main Street to Enterprise Ave, next to the Waynesboro Mall. More than 50  units featuring community groups, marching bands, majorettes, classic cars, Zembo cars, emergency vehicles and of course Santa are expected to participate.

Waynesboro will officially kick off the holiday season with the lighting of its community tree at 7:30 p.m. Friday. The fun leading up to flipping the switch on the lights begins when the community starts to gather on the Square at 5:30 p.m. however.

It will feature free hot chocolate, cookies and treats, carriage rides and appearances by dignitaries.

Chambersburg’s 51st annual Christmas parade starts at 6 p.m. Saturday with Christmas-themed floats, marching bands, dancers, and twirlers. Riding in his traditional miniature red holiday train, Santa will make his official appearance in the parade. He will stop at Memorial Square to light up the magnificent community Christmas tree.

The parade route starts at King and Main Streets, moves south on Main to Washington Street, then east on Washington to Second Street, and north on Second to Grant Street for disbanding.

Guilford Township resident Jamaica Keefer provided the tree that Santa will light during the parade.