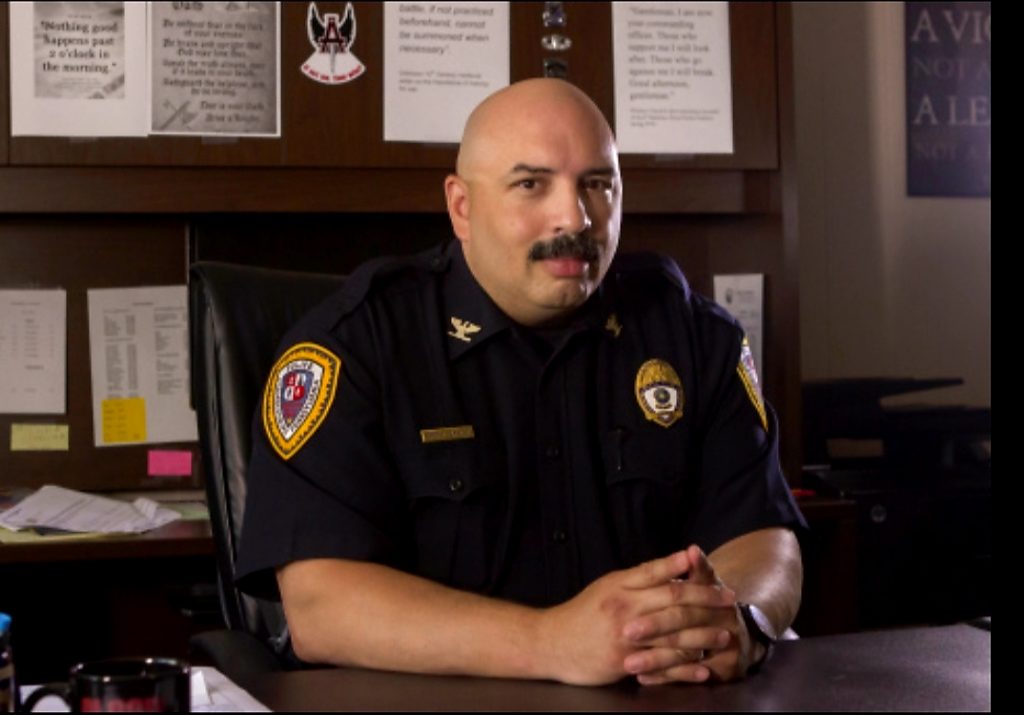 CHAMBERSBURG — Community policing is a nice catch phrase, but how different is it from any other kind of policing effort?

It depends on how it’s done, according to Chambersburg Police Chief Ron Camacho.

To succeed, the program has to first gain the trust of the community’s citizens, then involve them in the department’s crime prevention and enforcement effort.

CPD uses a multipronged approach to policing, he said.

The department aggressively uses social media — including Facebook and CRIMEWATCH to reach out to and communicate with the public.

“We are extremely transparent,” Camacho said. “What we have here is very special, and it’s unique.”

The benefits of effective community policing include:

Camacho feels the department has achieved most of those goals in the three years he has headed CPD.

“The people of Chambersburg have been very good in helping us with tips,” he said. “Not many communities have the kind of support we have had.”

Chambersburg police integrate a number of the techniques into their efforts to get the larger community involved and behind the policing effort.

Those include regular Downtown foot patrols, the effective use of a network of high definition surveillance cameras both downtown and in the community’s parks and other borough owned properties, and connecting with the community through social media.

Those efforts combined with what Camacho and Mayor Walt Bietsch call good, old-fashioned police work are paying off for the borough.

In the last few weeks police have solved several high profile cases, including shootings, a daytime armed robbery at a park and a jewelry store theft, quickly.

Much of the thanks goes to the public for tips called in after citizens saw details and photos on social media.

“Citizens of our borough are our eyes and ears,” Bietsch said.

“People want to help,” he said.”Thanks to tips we received from the public, three major crimes were solved within a week (earlier this month)”.

But it isn’t just major crime that is solved through the department’s use of technology and social media.

“We’re solving close to 40% of our hit and runs,” Camacho said. “Compare that to 8% for many large cities such as Seattle.”

That is mostly thanks to surveillance cameras and social media tips, since many crimes have no witnesses, just victims.

Camacho said police received a dozen tips within four hours of a recent armed robbery at a local park. The first came in just an hour after a photo and narrative were post on CrimeWatch.

“People want to help,” he said.

He hopes to eventually have most of Chambersburg and Greater Chambersburg following the department on Facebook and CrimeWatch.

Bietsch calls the use of social media by the department “a neat way of communicating.”

“The world wants information and they are willing to partner with us by giving back to us. The intelligence we gather from the community helps us (solve crimes).”

But Bietsch — a retired CPD sergeant — stresses that in good policing “everything works together.”

In addition to all the technology and social media, you have to have good detective work, he said, something Camacho also stressed.

“When it comes to technology, they grew up with it” he said. “I would put my guys up against any department.”

“We pull out all the stops,” he said. “Everyone works together, and we have been very successful.”

“It’s a cooperative effort,” he said. “Everything has to work together … good pictures, aggressive on social media, good detective work… its a community effort.”

The result, he said, is a police department that is effective and efficient.

Thanks to the Community

In a thank you letter Camacho posted on social media earlier †his month, the police chief thanked the public for their help and said tips submitted by the community’s ordinary citizens had helped police quickly solve an early morning shooting on March 30 and an armed robbery the afternoon of April 4.

”Successful policing of any City, Town, or Borough is a collaborative effort; we cannot do it alone anymore. Your constant and consistent cooperation lets us know that you are committed to making sure that Chambersburg is a safe place to work, visit, and reside in,’ he wrote.

Read Camacho’s complete Thank You letter to the community here.