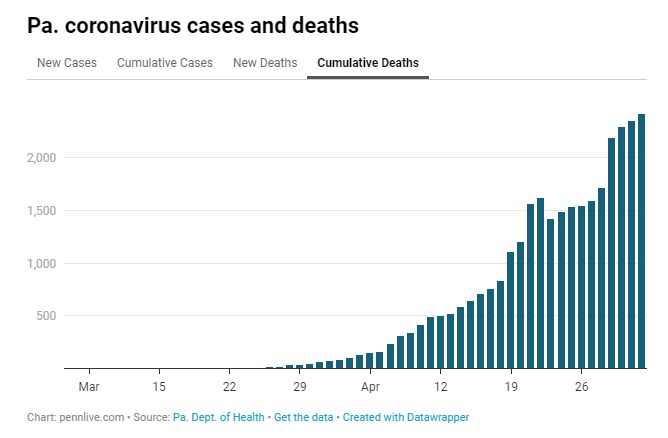 Counting Pennsylvania’s coronavirus deaths has garnered both controversy and disputes. So what’s up with that? Here’s one explanation.

As Pennsylvania starts to lift coronavirus restrictions in some counties, PA Post asked Transforming Health reporter Brett Sholtis some questions about the data gathered about deaths attributed to the epidemic:

PA Post: Some critics of the coronavirus lockdown say the death counts are overstated – that many deaths that had nothing to do with COVID-19 are being recorded as if they did. On the other side, we are hearing from county coroners that the Health Department is under-counting COVID-19 deaths. Why is this seemingly simple number the subject of so much debate?

Sholtis: The numbers come from death certificates that are written and signed either by doctors, if the person died at the hospital, or county coroners, if the person died at home. The counties get the certificates first. So the state health department’s numbers on the public database often lag behind what the counties are reporting. As recently as a week ago, for example, in Lancaster County, the coroner told me 146 people had died from COVID-19, while the state was only reporting about 75 deaths there. The state says it’s working on getting better at updating those numbers.

Now, regarding the notion that the death numbers are overstated. This is an idea that health experts have debunked. Here’s one example of how careful the public health community is being with the count: I spoke with Berks County Chief Deputy Coroner John Hollenbach recently, and he mentioned that he was awaiting toxicology results for a COVID-19-positive person who died. The toxicology report would allow him to rule out a drug-related death before he determined the cause of death. In other words, coroners aren’t merely saying, ‘Well this person tested positive for the coronavirus and they died, therefore COVID-19 killed them.’ COVID-19 kills people in a specific and measurable way, and there are specific guidelines for determining whether it was the cause of death. So, I think it’s incorrect to suggest that just because someone, for example, had other health problems, their death shouldn’t count.

Q: Testing is key to reopening the economy, public health experts say. Do we know how many tests are actually being conducted every day in Pennsylvania? And is that number enough to support reopening?

A: This is a good question to ask right now because state Health Secretary Dr. Rachel Levine just said she wants to test 2 percent of all people in each of the state’s six regions each month. That would be about 250,000 tests each month. In total, the health department has recorded about 228,000 tests since Pennsylvania had its first case in early March. So, the state is going to have to drastically increase its testing to meet that goal.

Is that enough to support reopening? Some health policy experts say we need to test basically everyone. We still don’t know the percentage of people who have this but who don’t show any symptoms. That’s such an important number. And Levine says there is currently no plan for widespread testing of asymptomatic people. Meanwhile, we have people calling for businesses to reopen, so there’s also that pressure, and the counties on deck to loosen restrictions are counties that have seen a slowdown in cases.

Q: It appears that PA’s hospitals have so far escaped being overwhelmed with cases like those in NYC or New Jersey. Is that true statewide, or are there pockets of the state where hospitals are unable to keep up?

A: According to the state health department, there were a few hospitals, mostly in southeastern Pennsylvania, that hit capacity, and those people were sent to an alternative site set up by the Philadelphia Department of Public Health at Temple University. East Stroudsburg University also had an alternate site, but it wasn’t used. So it’s true to say that Pennsylvania hospitals didn’t experience some of the scenarios that we saw happen in other countries or in New York City, for example.

Q: There were dire predictions about ventilator shortages and ICU bed deficits as early as the beginning of April. What happened? Did the experts overreact?

A: The great irony of this whole thing is that the better we are at social distancing, wearing masks, staying home and washing our hands, the more it seems like we overreacted. I guess the only way to really tell how bad it could have gotten would have been to have done nothing. So, I don’t think it was an overreaction. I talked to a Lancaster County-based doctor last month, Chris Macedonia, who was concerned about hospitals in Lancaster not being able to meet demand. As he put it, you shouldn’t prepare for the bare minimum. You should plan for a bad scenario, and if that scenario doesn’t happen, you don’t say, “We overreacted.” You look at that and say, “Well, I’m glad we prepared.”

April 16, 2020
Thanks for subscribing! Please check your email for further instructions.