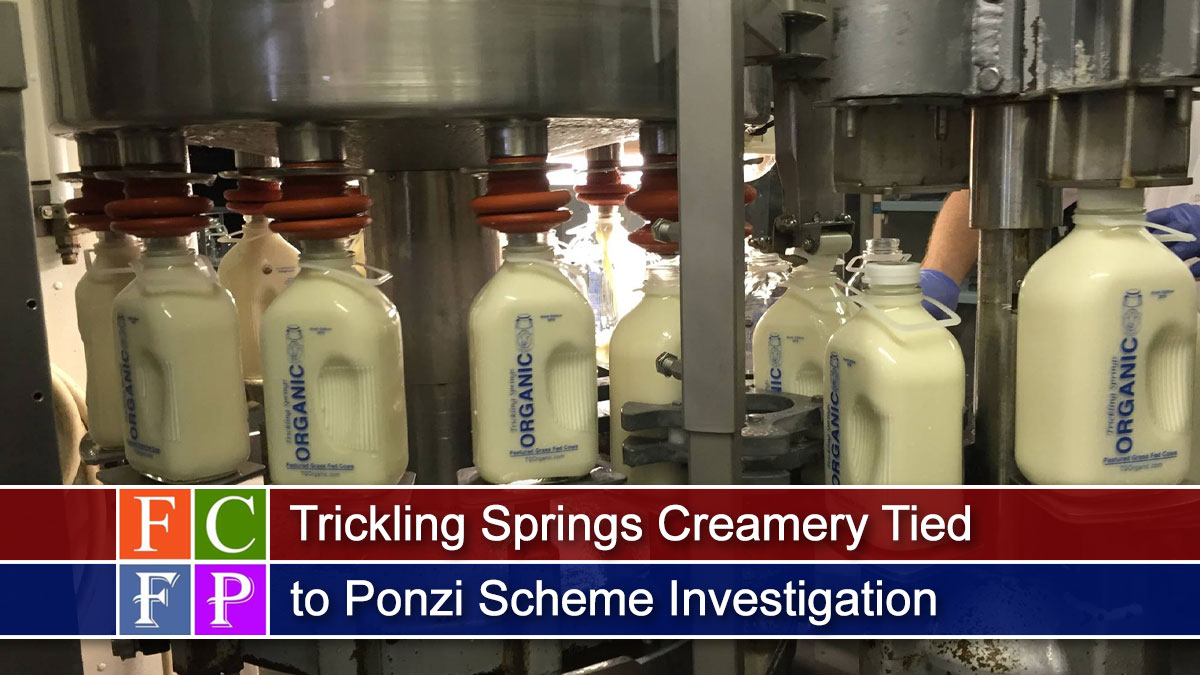 Franklin County’s Trickling Stream Creamery is in the news again this year. This time, majority owner Philip Elvin Riehl is accused of defrauding his Mennonite and Amish neighbors of millions in a massive Ponzi scheme.

United States Attorney William M. McSwain announced yesterday that Riehl, 68, of Berks County, has been charged with conspiracy, securities fraud, and wire fraud. The charges stem from an investigation into a Ponzi scheme worth approximately $60 million.

The alleged fraud targeted members of the Mennonite and Amish religious communities in Pennsylvania and elsewhere. It is one of the largest Pennsylvania-based alleged Ponzi schemes in history,

Riehl, an accountant, fraudulently solicited tens of millions of dollars in investments from his accounting clients and others. The funds went into a bogus investment program that he operated, investigators allege.

Riehl then diverted funds from the program to Trickling Springs Creamery, McSwain said.

Riehl also fraudulently solicited direct investments in Trickling Springs Creamery. He and several of the business’s co-owners were targets of a 2018 fraud probe by Pennsylvania’s Banking and Securities Commission.

A complaint filed by the commission alleges the company and Riehl, along with co-owners Gerald Byers, Dale Martin, and Elvin Martin sold promissory notes to investors from 2015-17 totaling almost $8 million. The owners didn’t disclose to investors the company’s financial condition or risk associated with the notes, according to the complaint.

The complaint also alleges the owners received money from the company’s bank accounts during the same time period.

The creamery closed in December. By that time the federal investigation into Riehl was apparently already underway.

The federal charges are in addition to any state enforcement efforts. They allege Riehl made material misrepresentations about the safety and security of investments in his program, and about its performance. He also allegedly misrepresented the creamery’s business and financial condition.

The type of investment scheme Riehl used is sometimes called “affinity fraud.” The term typically involves investment scams preying on members of groups such as religious or ethnic communities.

“These types of scams exploit the trust and friendship that exist in groups of people who share common interests or beliefs,” McSwain said.

“These investors were looking for honesty and integrity when deciding where and with whom to invest their money,” McSwain said. “

He said Riehl, a trusted member of their religious community, betrayed that trust.

If convicted, Riehl faces a maximum possible sentence of 45 years in prison, a $5,500,000 fine, a 3-year term of supervised release, forfeiture, and mandatory restitution.