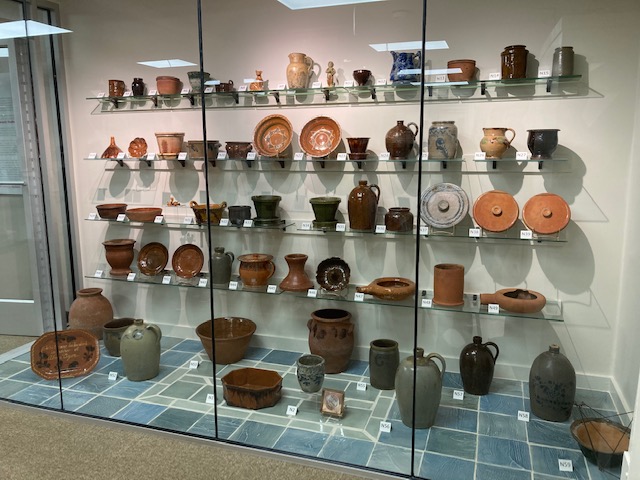 Mary Ashe-Mahr and Becky LaBarre collaborated to create the space housing the collection, on permanent loan to the museum. It can be viewed in the visitors center at Renfrew Museum & Park, 1010 E. Main St. in Waynesboro. The two women are executive directors of NCCS and Renfrew.

A grant from the Waynesboro Beneficial Fund helped cover some of the project’s cost.

Born in Hagerstown, John Bell became one of America’s pre-eminent potters. John learned the trade from his father, Peter, but advanced his knowledge by learning new techniques and developing innovative recipes for different glazes.

The apprenticeship with father in Hagerstown, taught John the concepts of German 18th-century potter. He married in 1826 and relocated to Chambersburg. He worked there until 1833. It was in Chambersburg, working with Heart, that he learned English ceramic molding techniques. Those techniques became  popular in all of the Bell family pottery wares.

In 1833, Bell opened a pottery in Waynesboro. He and his wife, Elizabeth, had nine children,  several of whom joined the pottery business. John Bell died in 1880, and the pottery shop burned down in 1899. The rooster weather vane that sat atop the Bell shop is perched in front of the exhibit in the visitors center at Renfrew, which houses the largest national display of John Bell and family pottery.

The works of accomplished potters Baker and Kimler round out NCCS’ assortment.

A short video showing the exhibit is available on the Nicodemus Center for Ceramic Studies’ Facebook page.

NCCS’ mission is preserving and interpret historic folk pottery from the Cumberland and Shenandoah valleys by ensuring a broad spectrum of the public can enjoy the beauty of regional art.  The Renfrew exhibit fulfills that mission