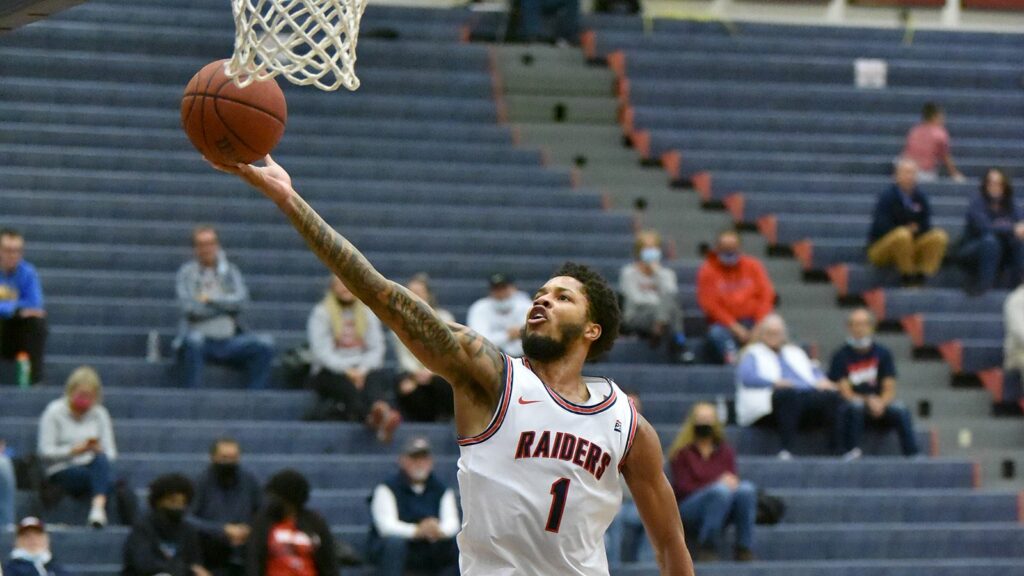 IUP’s Crimson Hawks fell to Shippensburg’s Red Raiders Sunday, moving SU into the top East standings. It marked the Raiders third win of the week on the basketball court.

The men’s team capped off it’s on the road week with a 72-60 victory at No. 6 IUP in a Pennsylvania State Athletic Conference (PSAC) mandated crossover at the Kovalchick Complex.

Shippensburg (7-3, 4-1 PSAC) used a pair of key runs to gain separation from its opponent. An 11-2 run in the final 10 minutes of the first half allowed the Raiders to lead by as many as nine points in the opening frame. The decisive run came in the final four minutes. The Raiders stretched a four-point lead into a 15-point advantage in the game’s final 90 seconds.

The Crimson Hawks (9-1, 4-1) entered the week ranked fourth in the nation in scoring offense (93.5 points per game); but the team was held to 65 points by Shepherd on Saturday. Shippensburg them held them to a season-low 60 points on Sunday. Playing without leading scorer and 2020 PSAC Championships MVP Shawndale Jones, the Crimson Hawks were limited to 37% shooting (31% in the second half) by the Raider defense.

Another big factor for the Raiders was a 12-6 advantage in three-pointers. SU entered the week tied for 15th in the PSAC with just 43 three-pointers through eight games. The Raiders made 25 three-pointers over the weekend (13 yesterday at Johnstown, 12 today at Indiana). IUP was limited by the Raiders to 2-of-17 (12%) shooting from three-point range in the second half.

Graduate Jake Biss (Latrobe, Pa./Greater Latrobe) once again led the Raiders with another game-high 20 points. Biss made five three-pointers for the second straight game. Biss scored 17 of his 20 points in the second half and was 4-of-5 from three-point range in the second half. He finished eight rebounds – equaling a career high – in addition to four assists and two steals. He was also 5-of-5 at the free-throw line.

Redshirt-sophomore Rashon Johnson (Philadelphia, Pa./Simon Gratz (Highland C.C.)) continued to provide a spark with 15 points, shooting 6-of-10 from the field and 3-of-4 from three-point range. Johnson has scored nine or more points in all 10 games this season.

Junior Carlos Carter (Indiana, Pa./Indiana), playing in his hometown, put up 14 points, five rebounds, four assists, a block and a steal. Carter was 6-of-14 from the field and made both of his free-throw attempts.

SU shot 44% from the field and 46% from three-point range. The Raiders had 15 assists compared to 13 turnovers, scored 11 points off turnovers, and got 20 bench points. Freshman Michael Dunn (Washington, Pa./Trinity) contributed five points in the first half.

SU and IUP have now alternated wins and losses in the last five meetings dating back to the 2017 PSAC Tournament.

Shippensburg now breaks for the holidays and return to action Sunday, Jan. 2, at 3 p.m. versus Virginia State.