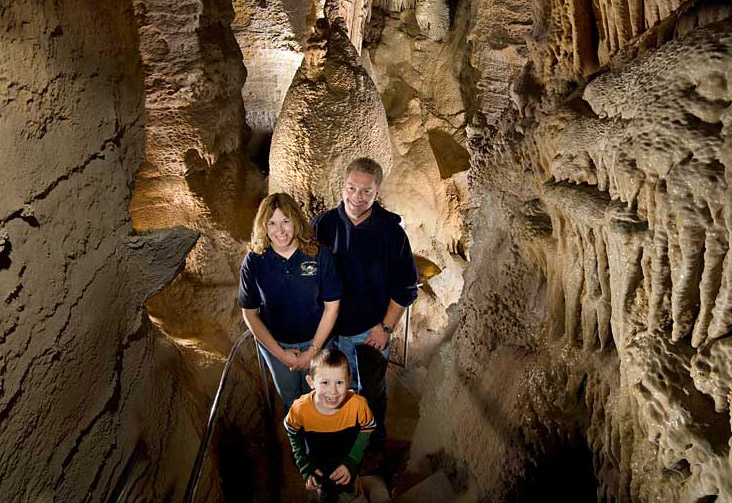 It’s been sunny and hot outside. I love summer, but I like to avoid the heat. This weather inspired this week’s pick for our day trip destination. Going into its 91st season, Lincoln Caverns is a great place to escape the heat with a constant temperature in the caverns of 52 degrees.

Lincoln Caverns is located in Huntingdon, PA, which is about an hour and a half from Chambersburg. They are open from 9 a.m. until 5 p.m. every day and tickets are only $9 per person. That makes this a very affordable destination, with a great level of exploration underground.

For $9 you can experience a one hour interpretive tour of two spectacular crystal caverns, Lincoln Caverns and Whisper Rocks. In the caverns, there are a wide variety of cave formations, including delicate crystals, sparkling stalactites, and massive flowstones, which await around every turn!

You don’t have to wait long as tours leave every few minutes during regularly scheduled hours. Their goal is to provide an educational and enjoyable experience while preserving the natural beauty and splendor of the caverns for future generations.

While you are visiting, hike along their nature trails and you will have the chance to see local wildlife in its natural setting. Turkeys, rabbits, hawks, deer, and a variety of songbirds are frequent visitors to the woods surrounding Lincoln Caverns and Warrior Ridge Campgrounds.

Bring your lunch and sit down for a family picnic in one of their covered pavilions during your visit. Pavilions are available to larger groups with reservations.

Lincoln Caverns was discovered in May of 1930 during the construction of U.S. Route 22. Thirteen months later, on June 25, 1931, it was opened to the public as ‘Hi-Way-May Caverns.’

The family who farmed the land on which the cavern was discovered, were the original developers. By the end of the first season of business, the caverns were up for sale.

Myron Dunlavy, Sr., of Buffalo, N.Y., was interested in entertainment. Although his ‘regular’ job was as a manager for the New York Telephone Co., in his spare time he was in Vaudeville, ran a circus, owned a theater, and operated an amusement park. AND he loved caves. So much so that he advertised in newspapers: Real Estate Wanted – Caverns.

When he found out about the availability of ‘Hi-Way-May Caverns’ he entered into a five-year lease/purchase agreement with the Stewarts. From 1932 until 1937 the name was ‘William Penn Caverns.’ After purchasing the business Myron, Sr. decided to honor the President he most admired, changing the name to Lincoln Caverns.