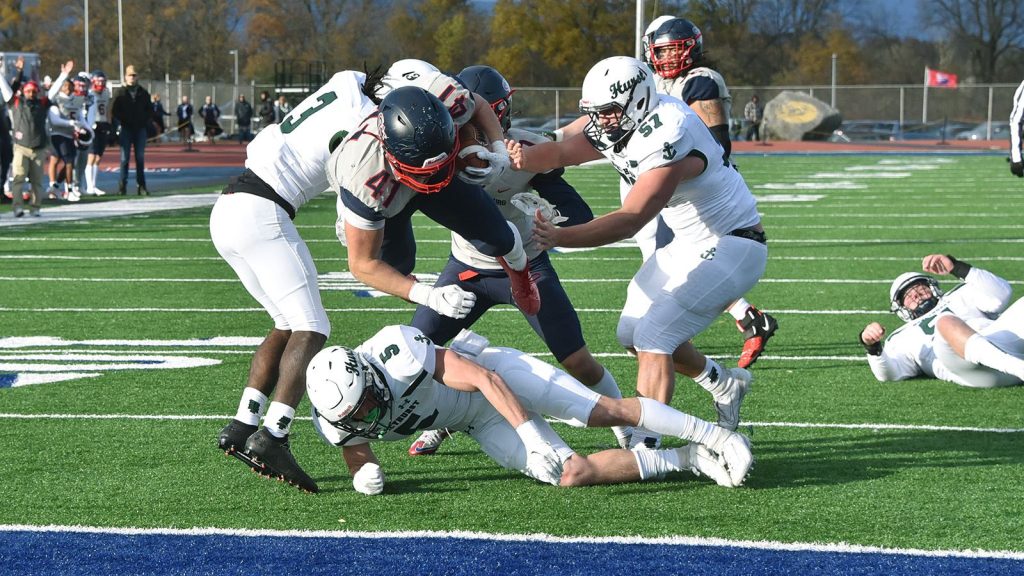 Shippensburg (9-2) began the day by honoring 21 seniors before its final regular season game and ended it by achieving its first undefeated season at home since 2012 (fourth in the last 30 years (1991, 1999)). The Raiders were 6-0 at Seth Grove Stadium in 2021 and outscored opponents by a 217-76 margin at the friendly confines.

Shippensburg ran the ball 47 times Saturday and held an 11-minute advantage in time of possession (35:26 – 24:34) but managed just 88 yards through the air in a defensive clash with Mercyhurst (4-7). SU limited the Lakers to just 26 yards rushing, as none of Mercyhurst’s 23 carries went farther than five yards.

Freshman place kicker Jaxson Montross (Tunkhannock, Pa./Tunkhannock Area) kicked a 27-yard field goal in the first quarter to cap off a five-minute opening drive for the Raiders. It was Montross’s 15th field goal of the year, which ties him with Howie Guarini (1990) for second-most in single-season school history (Jamie Reder kicked 17 in 2005).

A fumble on an SU punt attempt put the visitors in excellent field position and resulted in the first of two field goals on the day for Brian Alsobrooks – his 30-yarder evened the score at 3-3 less than a minute into the second quarter. On the ensuing possession, SU went 68 yards on 11 plays and DeLuccia capped off the 5:36 drive with a 5-yard touchdown run. The Lakers countered with a 34-yard Alsobrooks field goal to make it 10-6.

Mercyhurst took a 13-10 lead into halftime after scoring in the final minute of the second quarter, as Laker quarterback Joe Carter found Cameron Barmore on a fade route for an eight-yard score. Carter finished the day 15-of-31 for 263 yards.

That was the extent of the scoring until SU’s game-winning drive midway through the fourth quarter. DeLuccia ’s 9-yard touchdown run capped an 11-play, 65-yard drive that lasted 5:50.

Mercyhurst got to the SU 38-yard line before turning it over on downs with 2:24 left. The Lakers got the ball back one more time with 38 seconds remaining and no timeouts. But the SU defense needed just one play to clinch the win – as a sack-fumble by sophomore Jacoby Sherard (Lawrenceville, N.J./Lawrenceville) was recovered by redshirt-freshman Chisom Ifeanyi (Langhorne, Pa./Neshaminy).

Quarterback Brycen Mussina (Montoursville, Pa./Montoursville (Lafayette)) scampered for 54 yards on seven carries. Of his 13 pass completions, five were hauled in by Kyle Evans (Odenton, Md./Meade (Clarion)). His longest completion of the day was a 31-yarder to Evan Morrill (Hummelstown, Pa./Lower Dauphin (Millersville)).

Several defenders were integral to the cause. Sherard had 2.0 sacks Saturday to finish the regular season with a team-high 6.5 sacks. Trey Paul (Harrisburg, Pa./Central Dauphin) came close to a couple of interceptions on the day; he was credited with three pass breakups and had six tackles. Laron Woody (Middletown, Pa./Middletown Area) once again led the Raiders in tackles, recording seven.

Saturday marked Mercyhurst head coach Marty Schaetzle’s final game at the helm of the Lakers. Schaetzle, who served as an SU assistant coach under Rocky Rees from 1990-96, announced his retirement before the start of the season. He was recognized by the Raiders during the pregame ceremonies.

Shippensburg, currently No. 8 in the NCAA Super Region 1 rankings, awaits the announcement of the NCAA Tournament field. The NCAA Division II Football Championships selection show will air at 5 p.m. Sunday at ncaa.com.