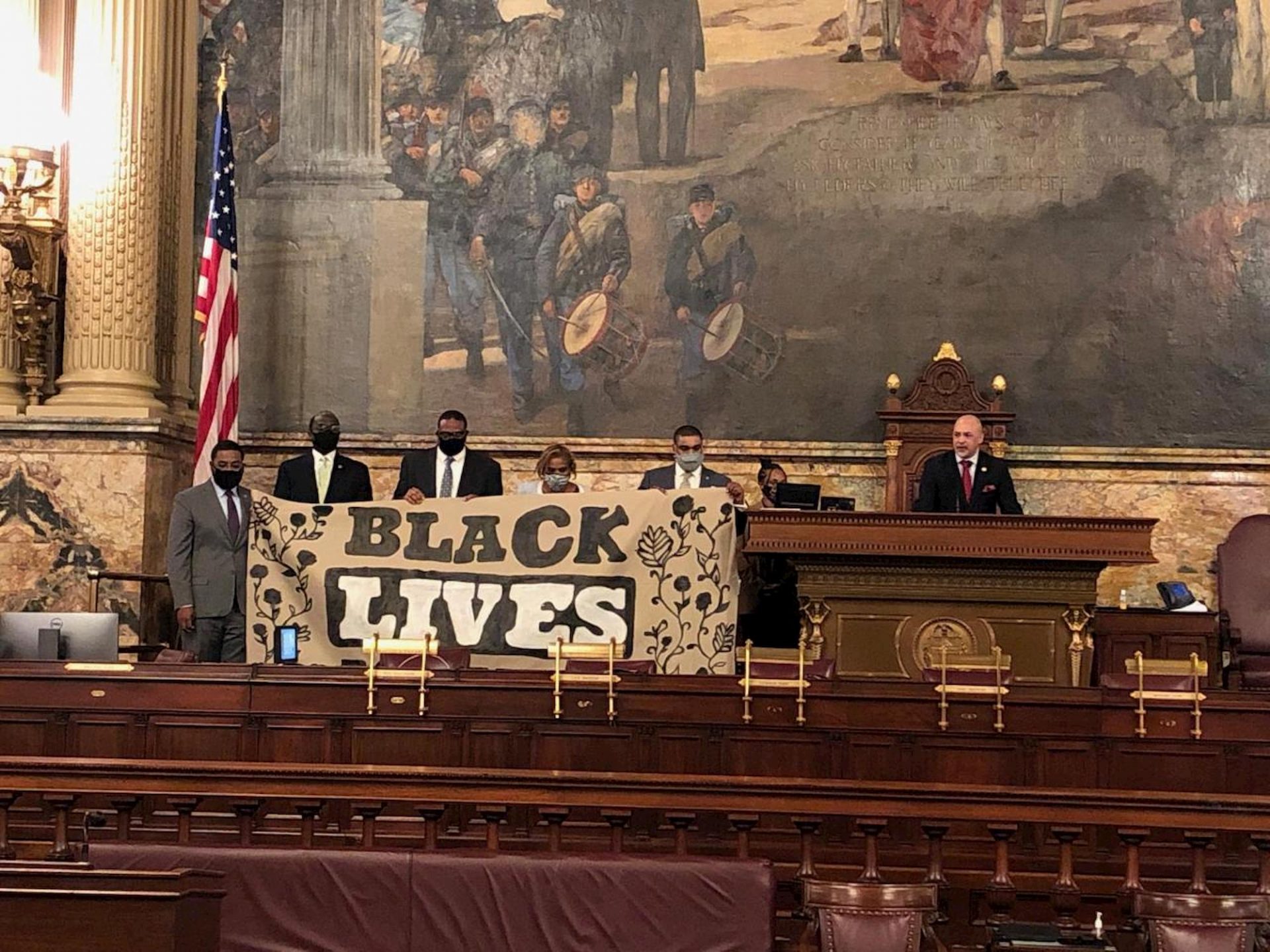 A group of Democratic representatives took over the Pennsylvania House floor early Monday afternoon, preventing the scheduled session from beginning.

Displaying a “Black Lives Matter” banner next to the speaker’s podium, a series of legislators delivered remarks demanding that the House consider police reform legislation.

“We are sick of lip service. We want change,” said Rep. Malcolm Kenyatta (D-Philadelphia). “We are not moving forward until we move forward on what the needs of Pennsylvanians are.”

At 2:15 p.m. — more than an hour after the session was scheduled to begin — House Speaker Mike Turzai (R-Allegheny) took the rostrum and suggested that the governor could call a special legislative session on police reform. He would support such a session, he said.

“We have to address this injustice,” he said as he appeared to get choked up.

During the hour of speeches by Democrats, Rep. Stephen Kinsey (D-Philadelphia), Chair of the Pennsylvania Legislative Black Caucus, pointed to 19 bills that he said the caucus wants the House to debate, including House 1551, and 1664, which relate mental health evaluations and police use of force policies, respectively.

‘We must do better’

“We as legislators must do better,” said Kinsey.

He then led those assembled in kneeling for 8 minutes and 46 seconds, the amount of time a police officer knelt on the neck of George Floyd in Minneapolis last month.

Many of the bills were introduced in 2019 and have sat in the House Judiciary Committee without a vote. Rep. Rob Kauffman (R-Franklin), whose chairmanship of the committee allows him to set its agenda, said through a spokesperson Monday that he was not available to comment.

Gov. Tom Wolf said in a press conference that he supported the House Democrats’ protest.

“I think that’s fine. I support what they’re doing,” he said. “When you look at the criminal justice system: there are two Pennsylvanias. There’s one Pennsylvania for you if you’re white, and one if you’re not.”

Wolf press secretary Lyndsay Kensinger said the legislature could simply vote on the that have already been introduced, but the governor would consider calling a special session if both chambers asked him to.

“A special session is not necessary to address these issues, as the legislature could vote on existing bills before their chamber,” she said. “However, if a majority of members in both the House and Senate pass a resolution requesting a special session, the governor would be supportive of undertaking this effort.”

The last special session of the Pennsylvania legislature came at the call of former Gov. Ed Rendell (D) in 2010 to address transportation. Gov. Wolf declined a push to do so last summer to address gun violence.

Democratic Whip Jordan Harris (D-Philadelphia) streamed the proceedings live on Facebook. The official cameras remained off because the speaker had not officially gaveled the chamber into session.

“This guy’s literally screaming like a mad man up here,” Bernstine said.“He’s not allowed up there, but that’s what he’s doing.”

‘We did this for justice’

Later, Turzai sent a letter to Wolf, formally requesting a special session. He said, in the past 60 years, governors have called for 17 special sessions. He said Pennsylvanians want to see police reforms in the face “of this frightening, but not isolated, example of police brutality.”

“Folks didn’t come this far not to get answers and not to get solutions,” Harris said. “This is not about symbolism. This is about real solutions.”

Ed Mahon is a reporter for PA Post. Previously, he was an investigative and political reporter at the York Daily Record/Sunday News, where his work revealed holes in Pennsylvania’s system for protecting victims of domestic violence. He grew up in Delaware County, graduated from La Salle University in Philadelphia and has lived in Pennsylvania most of his life.

August 12, 2019
Thanks for subscribing! Please check your email for further instructions.