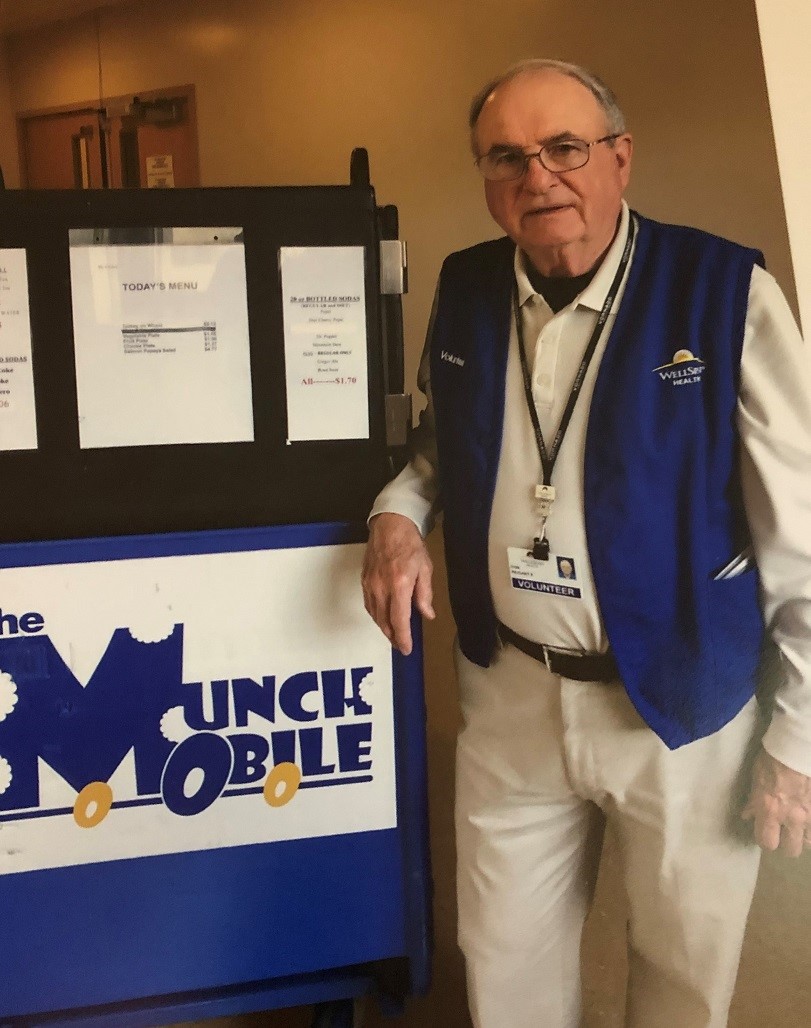 “I didn’t need a job for the money, but I needed something to do,” said Reigart. “And I thought ‘I wouldn’t mind volunteering out at the hospital.’”

Reigart is one of 4,000 volunteers across the WellSpan Health system. He spends several days a week loading up something known as the Munch Mobile. It’s a cart loaded with sodas, chips, candy, sandwiches, salads and other items. Reigart uses it to deliver snacks to patients and staff looking for a quick bite to eat.

Don says it not only gives him a sense of purpose, but also a glimpse into how the doctors, nurses and all the staff at WellSpan York Hospital go above and beyond in caring for patients.

“I have to get the okay from the nurses that they’re [patients] able to have certain things,” explained Reigart of the dietary restrictions in place for some. “And a lot of times, the nurses will pay for whatever for the patients. I mean, they’re just very caring.”

Don Reigart has been a fixture at the hospital for the past nine years. It’s exactly why the last few months have been difficult for him. In January, Reigart had a kidney stone that put him out of action for a few weeks. Soon after, he received the news that hospital volunteering was being suspended due to the COVID-19 outbreak and safety concerns.

“Volunteers play an important role in WellSpan’s mission to provide care and comfort to our patients,” WellSpan’s senior director of volunteer engagement, Christi Brown, said. “Temporarily suspending volunteers during the COVID-19 pandemic was a difficult decision but ultimately the right thing to do for their safety.”

WellSpan volunteers perform a wide variety of tasks, such as transporting patients, delivering flowers and mail, or working as greeters and receptionists. But Reigart hasn’t been on the job since March.

“This year so far, I think I’ve only worked four weeks,” said Reigart. “I’m anxious to get back. I miss it. The interacting with the nurses and the doctors. They’re just such good people. They’re my friends.”

Reigart was looking for a way he could help those nurses and doctors while being away from the hospital. When he and his wife received their Federal Economic Impact Payment (stimulus checks), they immediately knew they wanted to use it to help others.

“My wife and I, we each received $1,200,” said Reigart. “And we thought this could do some good, so we gave $500 to the Central Pennsylvania Food Bank, $500 to the York County Food Bank, and that left $1,400 that I’d like to use to help the nurses and the doctors at WellSpan. Especially at this time.”

“Our care teams on the front lines of the COVID-19 crisis are heroes, dedicated to keeping our patients safe,” said John Porter, executive vice president and chief operating officer, WellSpan Health. “The support from our communities has been overwhelming and a reminder of the important work we’re doing.”

Reigart says he wants the money to be used in any way that helps his colleagues and their efforts at the hospital. He wishes he could be there but wants to do what he can.

“I know in regular times the nurses really look after their patients. They care for the patients,” said Reigart. “And I’m sure they’re going above and beyond right now to take care of the patients. They deserve any little help I can give.”

If you would like to donate to WellSpan’s COVID-19 response, visit WellSpan.org/COVID19HELP.

April 14, 2020
Thanks for subscribing! Please check your email for further instructions.