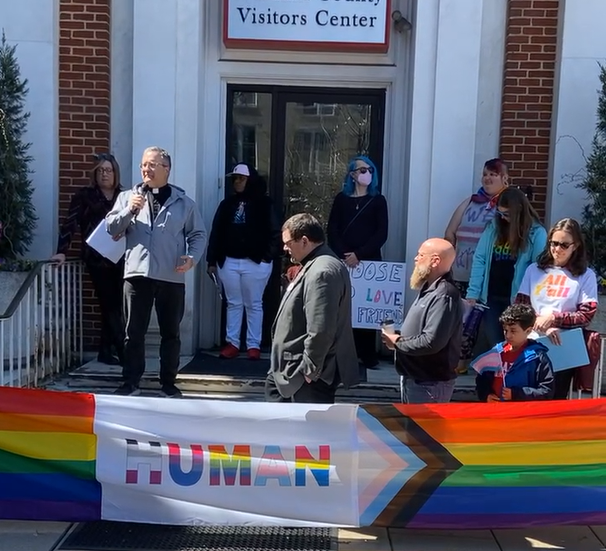 At 1PM today in front of the Franklin County Visitors Center on the square in downtown Chambersburg several speakers and supporters came out to show their support for the transgender community and reinstatement of the recently repealed Non-Discrimination Ordinance.

The goal of the event was to bring visibility to the transgender community and celebrate their achievements and contributions to society said Janelle Crossley, event organizer from the Coalition of Trans Youth.

Crossley said, “We had a wonderful very well attended event with 100+ attendees. Everyone was engaged and very interactive and I know each one took home love. The words of the speakers resonated throughout the crowd and the square and we’re heard loud and clear.”

Kim Wertz, who came out as transgender in 2005, survived suicide attempts and found confidence by volunteering and becoming an advocate for the trans community. She encouraged those in attendance to come to Chambersburg Borough Council Meetings to support her in her and make their presence known.

Milo another speaker who identifies as gender-queer, explained that she had to leave the local school district after a teacher outed them, leading to a suicide attempt. By repealing the NDO, Milo says it sends a message that they can be treated differently.

The event had several pastors speaking including two from Chambersburg, expressing their support for the Non-Discrimination Ordinance and universal love.

Pastor Mark Harris from Columbia Pennsylvania, who identifies as gender-queer, spoke on reinstating the NDO even if all it serves to do is make the community feel better. Local Pastor Caroline Saxton from United Church of Christ in Chambersburg also spoke. “Language of faith, language about God is used to hurt rather than heal, but my faith leads me to believe that love is what we are to be about,” said Saxton. Pastor Frye of St. Luke Lutheran Church in Chambersburg also spoke and said, “we are capable of so much more than the fear that is operating in our lives.” He explained that perfect love will cast out fear.

One of the council members, Alice Elia was in attendance and spoke. Alice Elia was on the council when the local NDO was in discovery and implemented, explaining it was an important step for our community. She is also one of the three council members who voted against it’s recent repeal. During the council meetings, Elia said many would speak and say “I love everyone, but” when speaking in opposition to the NDO. She encouraged the community to think in terms of “and instead of but” so that everyone has the same legal protections. She encouraged those in attendance to get out and vote for those who represent them.

Crossley said, “This is not a political or partisan issue, it is a human rights issue. The borough council was elected into office sworn on oath to serve and represent all their constituents, not only the ones they choose. Please reinstate the Non Discrimination Ordinance.”