Theresa DiLoretto tells the story of how an early visit to the Capitol Theatre shaped one local man’s life in the third in a series featuring local residents’ love affairs with the historic theatre.

Travis Horton was very little when he went to the Capitol for the first time. Like many local theatre fans at the time, his parents kicked off their 1995 holiday season with a family outing to A Christmas Carol.

Young Travis, four years old at the time, was entranced: audience members all dressed up in holiday finery, the cast in fancy costumes, the fog and tombstones and the magic of it all!

He not only clearly remembers the thrill of that experience; Travis leads a life that was shaped by it.

Travis attended Capitol Theatre events throughout his life and volunteered as soon as he was able, both with the Capitol and with Chambersburg Community Theatre (CCT).

Once, while serving as an usher, a fellow usher struck up a conversation about her other role at the theatre, as a member of the Capitol Theatre Center Foundation Board of Trustees. Shortly thereafter, the Board invited Travis to join.

He started his first-ever board term in 2019, just after completing his master’s program at Wilson College (Humanities, with concentrations in language and literature).

“My wonderful family and friends push me to do better,” Travis said. “They always encourage me; and I think everyone should try something new and exciting, even if it scares you!”

So, in his late twenties and with no theatre background other than as an audience member, Travis auditioned for CCT’s holiday show, Nuncrackers.  He landed the role of Fr. Virgil (see top feature photo) and further cemented the importance of the Capitol Theatre in his life.

Travis feels comfortable at the Capitol. From that very first visit right up to the present, volunteers, staff, and fellow Trustees welcomed him; supported him and pushed him to take risks.

A role for everyone

“There’s a role here for everyone”, he says.

As a new Trustee, Travis started as a member of the show selection committee. He relates his newest role as Secretary of the Board to his love of language; and, he laughs, “my organizing skills”.

The Capitol Theatre holds a special place in this man’s heart. With that first memory of live theatre firmly stuck in his mind, and the joy and wonder of it shaping him as a person; Travis gladly gives his time, talent, and treasure to the Capitol.

“Giving back to my community is important to me,” he said. “It feels right, but most importantly, it makes me feel good.”

Since 1927, the Capitol Theatre has been a beacon of the arts on Chambersburg’s South Main Street. With its original Möller pipe organ, mahogany railings, elaborate murals and carved fretwork, the historic building is a rare gem. A registered 501(c)(3) organization, the theater gratefully accepts donations at this link. Simply click on the blue “Donate” button.

Those who prefer to mail donations can make checks payable to Capitol Theatre Center Foundation and send them to Attn: Donations, 159 S. Main St., Chambersburg, PA 17201. 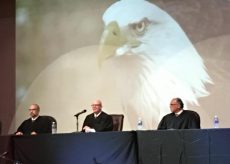