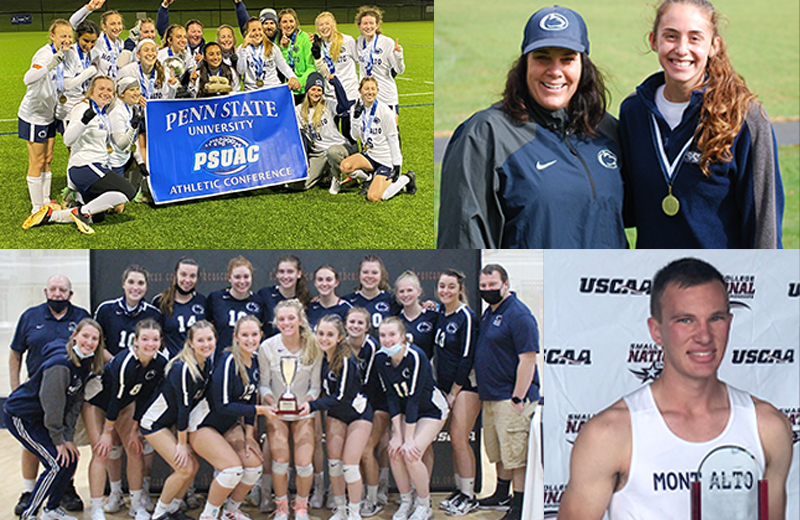 The 2021 fall sports season at Penn State Mont Alto was one of its most successful to date.

The golf team wrapped up its fall sports season at the USCAA National Championships in State College October 11-12. Brogan Beall shot an opening-round 88, followed by a 92 in round two, finishing in 85th place. Stephen Lucas was the other participant in the National Championships. He finished tied for 86th place. He shot an opening-round 87, followed up by a 95. Chance McClure carded his best round of 85 during the Pennsylvania State University Athletic Conference Invitational in September.

“Our fall season had many successful moments,” said Coach Bill Burke. “We had five new players in the lineup this fall with no course history at any of our away tournament venues. We faced many obstacles as a team this season and came through stronger than ever.”

Men’s soccer finished their regular season with an 8-11 record, 5-5 in PSUAC play. They earned the sixth seed in the PSUAC tournament following three straight wins to conclude the regular season. Penn State Mont Alto lost in the quarterfinals of the PSUAC Playoffs, falling to Penn State New Kensington 5-1.

Alex Martinez is the Mont Alto recipient of the John Fritz Sportsmanship Award. One student-athlete on each sports team that best displays good sportsmanship and demonstrates ethical, appropriate, polite, and fair behavior while participating in athletic events and as a member of the team gets the award.

“In spite of the uphill battles faced this season, the men’s soccer program experienced a lot of firsts,” said Tim Carey, men’s soccer coach. “Mont Alto picked up its first win against NCAA competition in 2021 and its first ever USCAA All-American. With a strong core returning and some newcomers, we expect a lot more firsts in 2022.”

Carey received the PSUAC Coach of the Year honor this postseason.

“I’m proud of our team’s accomplishments on the cross-country course and in the classroom,” said Coach Kevin Geesaman. “Their dedication to the Penn State Mont Alto cross-country team is greatly appreciated and will help lead to a bright future for our program.”

The women’s soccer team finished their season with a record of 13-4, going a perfect 8-0 in the PSUAC. The team earned an automatic bid in the USCAA National Tournament as the fourth overall seed.

Coach Mary Miller described the first year following a halt in the program at the conclusion of the 2016 season as a whirlwind.

“We’ve recruited the right student-athletes to Mont Alto, players who have a great work ethic and are respectful. These student-athletes are here to get an excellent education and have a lot of soccer left in their careers,” she said. “Success isn’t just what’s measured on the field, but also in the classroom and how you will make your teammates around you better. Having seven USCAA Academic All-Americans is enormous because when players see others have success, it forces their hand to want those accolades.”

“These seniors will always be known for their leadership on the court, but what they did off the court is even more special,” said Head Coach Randy Hood. “We had student-athletes giving campus tours to recruits, helping with other athletic operations, and being involved. The stuff they did behind the scenes has helped us build a culture here. It goes beyond what your win-loss record is. My goal was to establish the culture and recruit players who fit into that culture and help sustain that.”

“Collectively, our fall teams have seen great success this past season in their respective sports; arguably the best in program history. Not only did all the fall sports teams participate in post-season play, but many had breakthrough seasons,” Penn State Mont Alto Director of Athletics Staci Brennan said.

“Despite the unique challenges that our student-athletes and coaches have faced over the past 18 months (due to COVID-19) our teams are excelling and it’s definitely an exciting time for intercollegiate athletics at Penn State Mont Alto.”