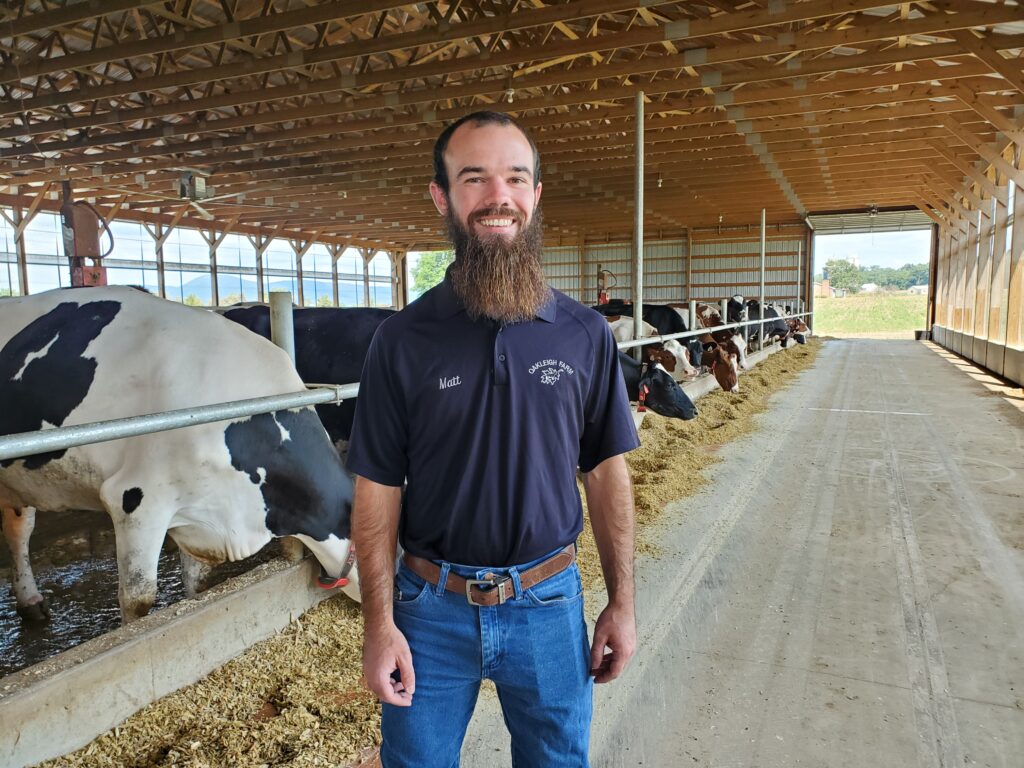 A local farmer incorporated smart technology in his dairy barns as a way of bringing the business into the 21st century following a devastating 2019 fire.

After the fire, the Brake family decided to rebuild their barn with a focus on robotic technology, including milkers, feeders and manure collectors. These aids increase efficiency and cow comfort at Oakleigh.

Both a bank barn and a dairy barn burned to the ground Dec. 14, 2019. About 200 dairy cows were safely evacuated but the hay and feed were a total loss.

The loss of the barn and milking parlor was devastating, and put the Brake family at a crossroads. Give up dairy farming, or rebuild? Brake’s family had been making their living from the land since the 1800s, with the first generation starting out as a horse trader before turning to farming.

Matt’s grandfather, Ed, started transitioning to cows in the 1930s, putting in one of the first milking parlors in Franklin County. But dairy farming isn’t for the faint of heart. It involves hard manual labor and long hours. Even though it is a family business for the Brake’s

The fire and subsequent losses brought the Brake family to a crossroads; Get out of farming, or rebuild?

They decided if they rebuilt, they needed to bring the dairy operation into the 21st century. That meant an entirely new way of doing things.

Though costly, the decision was easy. “Our hearts are in the agriculture industry,” Matt Brake said.

‘I’m so proud of my family,” Grandfather Ed said. “They could have given up. They could have done a lot of other things. But they wanted to stay in agriculture.”

The decision meant a whole new way of doing things. A new way of running their dairy.

It wasn’t an easy, or cheap, transition, but it has worked out well for Oakleigh Farms.

Technology is even part of the system that keeps the floors in the milking parlor clean, Matt said. Robots similar to the Roomba vacuums that keep floors in a home dust free and clean collect manure around the clock.

This technology has allowed Brake to pursue another passion: Piloting small planes. He first became interested in flying in high school, and started taking flight lessons in 2013.

In 2014, he got his pilots license, then became a flight instructor in 2017, giving flying lessons at the Hagerstown Regional Airport, just a short drive away from the farm.

“In flying and in farming, you need a plan. You need to be deliberate with your actions and always continue training and education. So, you are always learning,” Brake says.

“We do all of our flight training in this valley, so when I’m flying, I can look down at our fields and our cows. I just love that bird’s eye view,” he says.

Watch “This American Dairy Farmer” to hear how Brake’s grandfather, Ed Brake, feels about the robots at Oakleigh Farm.

“This series is an opportunity for consumers to meet and learn about the people who produce the milk for everything from their morning coffee to their children’s school meals,” said John Chrisman, CEO of American Dairy Association North East. “You see the passion dairy farmers have for taking care of their animals, protecting the environment and leaving a legacy for the next generation.”

“This American Dairy Farmer” visits 12 dairy farms in 2022. New episodes will continue to air through the fall months at AmericanDairy.com, where seasons one and two are also available. Other Pennsylvania dairies featured in the first two seasons include Mercer Vu Farms, also in Mercersburg; and Vista Grande Farms in Fleetwood.

The digital series offers a glimpse into the lives of hardworking farmers, highlighting family, tradition and sustainable food production on local dairy farms. The show is sponsored by American Dairy Association North East.