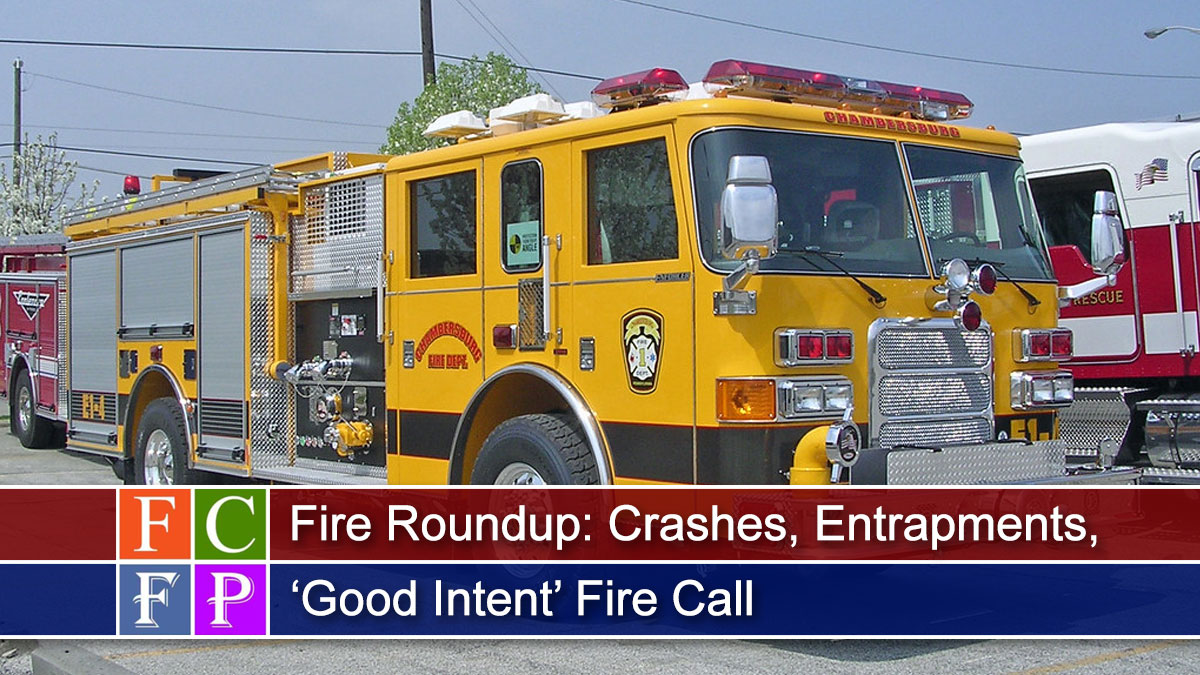 Area fire departments responded to crashes and fire calls the past week. Whether it is a vehicle crash, just burned food left cooking on a stove burner, a more serious fire or a “good intent” call, area firefighters are quick to respond.

At 10:18 p.m. Saturday the Chambersburg Fire Department was alerted for a vehicle accident at the intersection of Orchard Drive and South Main Street.

Chambersburg Fire Department was alerted for an odor of smoke in an apartment building at 1559 Edgar Avenue Monday.  Crews arrived to find unattended cooking as the source in one of the apartments.

Franklin Fire Company got a first-due box alarm on its drill Monday night, but as it turned out, it wasn’t an emergency.

A “passer-by” reported smoke coming from the roof of a house on Salem Road just off of Letterkenny Road in Greene Township. The Franklins arrived in the area and staged until more information could be obtained.

The caller did not stay in the area but was sure of the location. Chief 46 made contact with the homeowners who advised they had just lit their fire box and had no emergency! Units returned to service on a “good intent”

We urge our followers to call 911 and report emergencies! If at all possible, and safe to do so, please stay at the location and provide as many details as possible to 911.

Box 9-01 was struck for a garage on fire Sunday afternoon at Church Street and East Seminary Street.

Company 9 and mutual aid units were dispatched to 22 Church Street in Mercersburg. Chief 2 arrived on scene with fire showing, Engine 9-1 arrived on scene dropping a line and went to work on fire attack. Command held it to Company 9, 8, 18 and TRK42 placing the rest of the box in service.

St. Thomas (company 18) and The Franklins (station 4) assisted in loading the hose after the fire was out.

MMPW Fire Company personnel Mercersburg arrived with a working fire. Firefighters from Franklin Fire Company arrived, positioning in the driveway and the crew went to work.

The Truck crew was able to throw ladders, entering the garage and opening up for the engine company crews. Crews operated for about an hour ensuring the fire was out.

EMS crews were initially called for a fall victim, but the patient’s injuries warranted the need for a trauma center.

The crew arrived and decided to utilize ground ladders to the roof. Once no fire extension into the house was confirmed, the truck crew started on the chore of clearing the chimney of creosote build up.

Staff Report - April 7, 2020 0
Getting out to enjoy nature is one of the few activities recommended for Pennsylvanians under Gov. Tom Wolf’s stay-at-home order to contain the pandemic.

Arrests Made in Shippensburg Armed Robbery

Looking Back: It Happened on September 4th