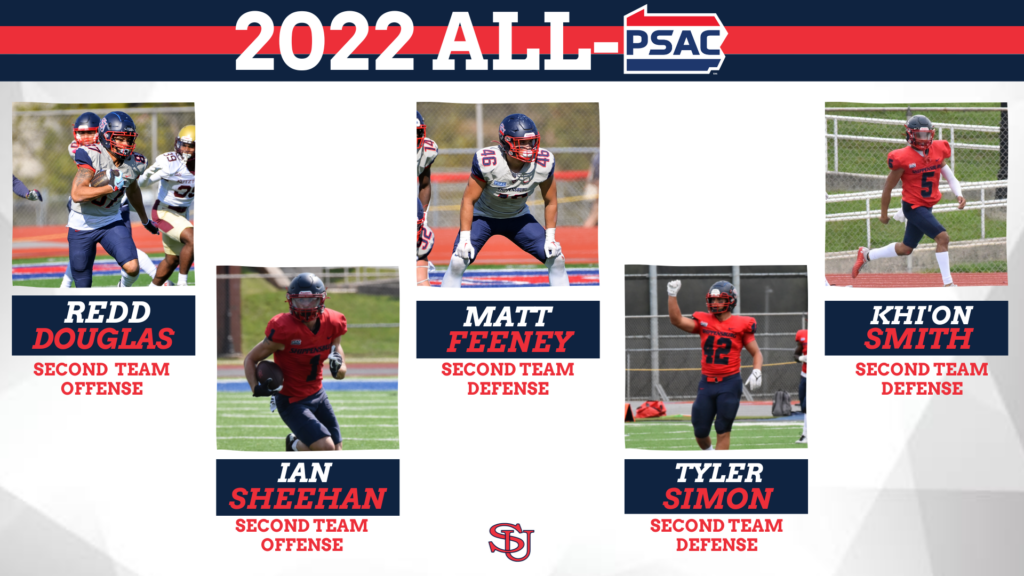 Douglas received All-PSAC plaudits as both a wide receiver and return specialist. Douglas was one of the most dangerous return men in the country this past season. He led Division II in the regular season in combined kick returns (906 yards – 848 KR, 58 PR), and his 33.9 KR return average was second in Division II for the regular season.

At wide receiver, Douglas paced the Raiders in receptions (62), receiving yards (662) and receiving touchdowns (5). His 142 all-purpose yards-per-game average ranked second in the conference in the regular season to Shepherd’s Ronnie Brown, the East’s First Team running back and return specialist, and is one of five players tied for the Division II lead at the end of the regular season with two kickoff return touchdowns.

Sheehan, the other half of the Raiders’ All-Conference receiving duo, finished the campaign with 41 catches, 531 yards receiving and 4 touchdowns despite missing two games due to injury.

It is the first All-Conference recognition for all but Sheehan, who garnered All-PSAC East Second Team recognition in 2021.

Feeney, an All-PSAC honoree at linebacker, led the Raider defense in tackles (99) and tackles for loss (19).

Feeney’s 19 tackles for loss are the most by a Raider since Jake Metz, who also recorded 19 a decade prior in 2012. That total is tied for sixth-most in SU single-season history [Jaron Nalewak also had 19 TFLs in 2006]. He finished the regular season tied for eighth in Division II in the category and set a new Shippensburg single game record with 6.5 tackles for loss in a win at Bloomsburg Sept. 24.

Feeney also finished the regular season sixth in the PSAC and 25th in Division II for tackles per game (9.2).

Simon, like Feeney, started all 11 games for the Raiders at linebacker and finished second on the team in total tackles with 74.

Smith, an All-PSAC defensive back, ranked eighth in the PSAC in passes defended with a team-high nine. He was also the Raiders’ third leading tackler with 58.

Shippensburg finished the 2022 season with five victories, including a win over regionally ranked Gannon in their final game.