F&M Trust has hired a new manager for its Harrisburg region, and promoted a current employee to fill positions at its Chambersburg and Greater Capital Region Markets.

Before F&M Trust, he worked for the First National Bank of Pa as Senior Vice President, Regional Manager of Commercial Banking. After obtaining a degree in economics, the Lancaster resident is now studying finance.

McCarty is an active member of his community. He volunteers for the United Way, the Pennsylvania Economy League, and Junior Achievement. He is a board member for the Millersville University Capital Campaign.

She participates in community events and supervises a team.

Franzoni has been with the bank for 15 years. She has a bachelor’s degree in business administration from Kaplan University.

The Shippensburg resident is an active member of her community as a board member for the Shook Home. She volunteers for the Chambersburg Downtown Business Council.

Melody Vitek is a high school graduate of the Career Magnet School. She has since moved on to Wilson College, where she will be entering her second year as an English major with a concentration in creative writing. 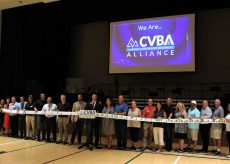