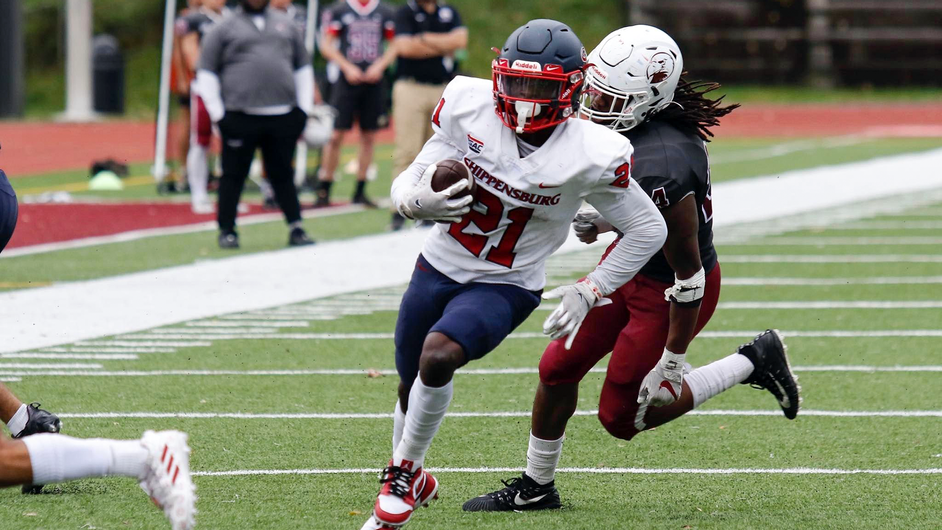 The Shippensburg University football team had its offense get back on track in a big way on Saturday, establishing a 35-0 halftime lead in what was a 44-7 rout over the Lock Haven Bald Eagles as the Raiders wrapped up their Pennsylvania State Athletic Conference (PSAC) Eastern Division schedule at Hubert Jack Stadium.

Shippensburg (4-6, 3-4 PSAC East) snapped a three-game losing streak. Lock Haven (1-9, 0-7) was held to minus-6 yards rushing by the SU defense and was out-gained by the Raiders 369-to-91, with its only touchdown of the game coming inside the final 30 seconds. SU produced a season-best 171 of its 369 yards of offense came on the ground.

After Dorsey provided the Raiders with a 14-0 edge after the first 12 minutes, Falco added to the Ship tally on the opening play of the second quarter, finding junior wide receiver Mike Vigliano (Mechanicsburg, Pa./Mechanicsburg Area (Gettysburg)) on an underneath route in the red zone to cap a 14-play drive with a 12-yard touchdown.

The SU defense and special teams, so successful in providing points in the first half of the season, got back on track as well in the second quarter.

Dorsey added his third touchdown of the day in what was the only points for either side in the third quarter. A 25-yard field goal from sophomore Jaxson Montross (Tunkhannock, Pa./Tunkhannock Area) put the Raiders in front 44-0 with 14:09 remaining.

Dorsey tallied a total of 78 yards (46 rushing, 32 receiving) in the Raider victory. Williams added to the run total, gobbling up 61 yards on the ground on a team-high 12 attempts.

Falco spread to ball around to his receivers during another efficient outing behind center. No receiver caught more than four passes, as Falco completed 15-of-21 attempts for 172 yards. Vigliano led the way with three catches for 54 yards.

Next week, the Raiders close out their regular season with an away matchup against PSAC West opponent Gannon (8-2, 6-1 PSAC West). Kickoff from McConnell Family Stadium in Erie is set for noon.