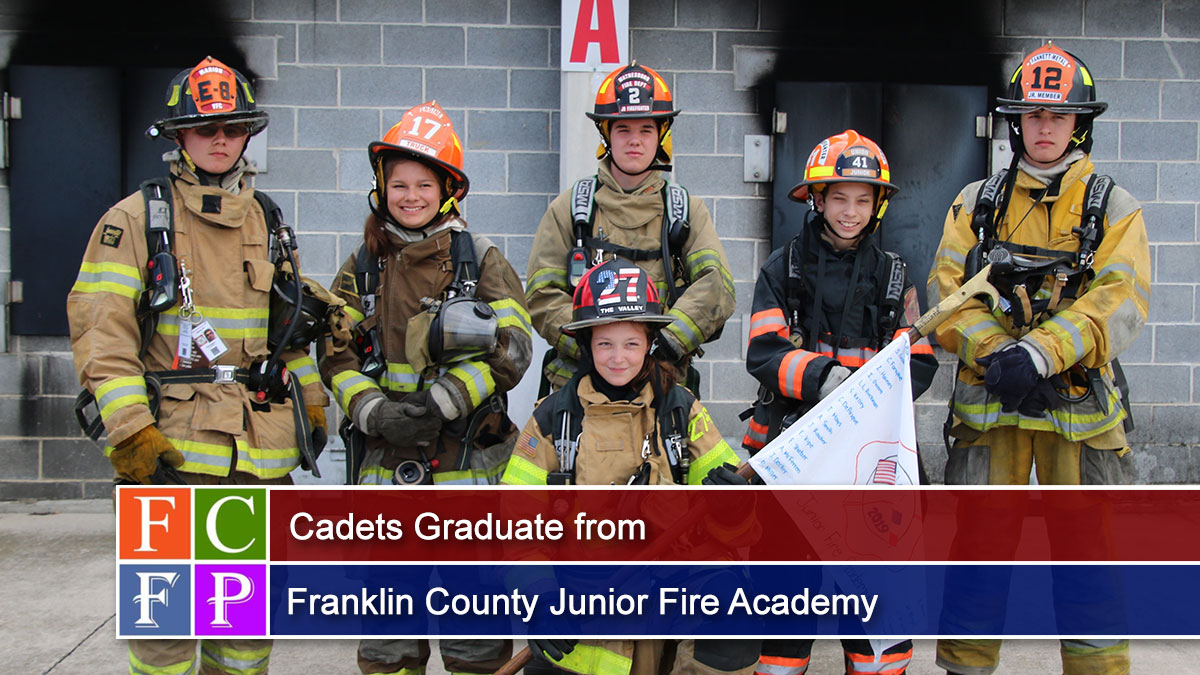 To make his long journey even more memorial, academy instructors sent a call out on social media asking for as many patches from area fire companies as possible to send home with 16-year-old Nicholas Carret, who was representing Jeunes Sapeurs Pompiers (The Young Firefighters) of Givors Grigny in Givors, France.

The week began dramatically for the teen cadets. They had arrived Sunday morning, registered and were greeted by chief Jerry Houston and Chief Ben Holmquest, the academy’s top instructors. Chief Brian Eterline gave the opening speech.

But there the schedule got off track.

A three-alarm fire call went out in Chambersburg. Every fire company in the area responded in one way or another, either sending personnel to the scene or as a backup for the empty firehouses that had firefighters at the scene.

That meant a temporary loss of most of their instructors, who headed to the borough to help fight the fire.

Cadets made their way to the Learning Center to unpack for the week, try on clothes and eat pizza. Then they started on the 2019 flag design.

It wasn’t long before the cadets got a taste of why they were there, however. After the fire was brought under control and extinguished, cadets were escorted into town, thanks to a convoy of Directional Traffic trucks, to assist with clean up.

Later in the evening, cadets headed back to the Learning Center to resume the flag design.

Setting the Tone for a Week of Training

Monday morning started early as the cadets made their way to the Training Center, where the dining area was set up for breakfast.

First, it was a little PT, then breakfast. Then training began in earnest with Stop the Bleed, CPR training and a motivational speech by Chief Charlie Westscott. Later they would get a review of the Self Contained Breathing Apparatus so vital in firefighting.

Then it was off to tour the county’s Department of Emergency Services 911 center. In the evening, they visited Franklin Fire Company’s Station 4, where they enjoyed a steak dinner and another inspirational speech by Jason Kuehler.

The visit ended with push-ups, where Blaze, the fire chief’s Dalmatian, gave puppy kisses to all 31 cadets. While they hammering out their owed push-ups for the day.

Then back to the learning center for a surprise visit by Curtis E. Bryan with a treat from Krumpe Do-nuts.

Monday set the tone for the rest of the week, which was filled with a mix of training in various firefighting and rescue techniques and visits to area fire departments and fire museums.

One day cadets rode on Rescue Hose Company’s 1930 Seagrave, then were treated to an Italian dinner and tour of the company’s fire museum.

On another morning cadets were visited by a group of Franklin County’s past fire chiefs and firefighters. The group then donated $500 to the Academy.

The Battle for the Class of 2019 Flag

Every day included a ”battle for the flag” which pitted cadets against instructors (and others) for possession of the flag.

There were rules for the game. According to a post on the academy’s Facebook page at least.

Those rules involved big orange cones, which it appears might have somehow protected the flag.

“We urge all Departments to review so that when you see us out & about you (know when) you may or may not have the opportunity to take the flag on a County tour,” the post said.

The week included an Appreciation Dinner on Wednesday, and a formal graduation ceremony Saturday. During that ceremony, every cadet got a plaque commemorating their week at the academy, some gear and a graduation certificate.

The staff also presented the collection of fire department patches to their international student, Cadet Carret, along with coins and other mementos of his trip to an American junior fire training academy.

The Academy was sponsored by and held at the Franklin County Public Safety Training Center.

Bicyclist Airlifted to Trauma Center After Being Hit by Car