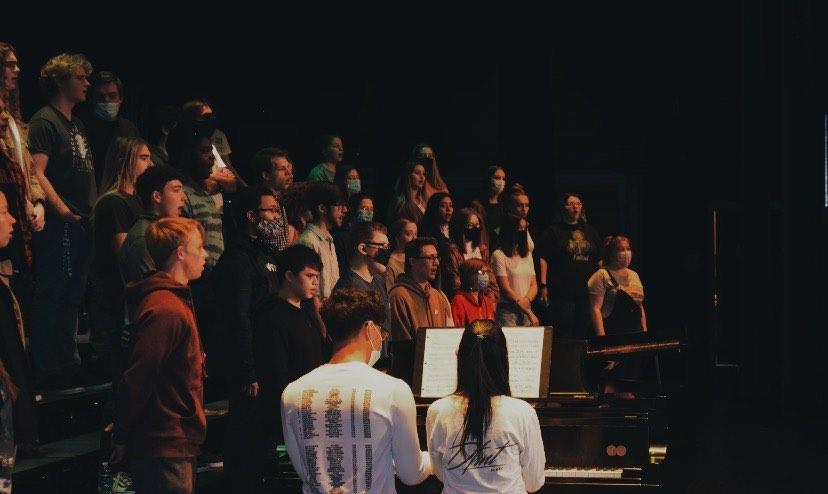 CHAMBERSBURG – The CASHS Glee Club will take the stage tonight at 7:30 p.m. for their annual winter concert, which has been a tradition for students, alumni and community members for nearly 80 years. The concert provides an evening of traditional and contemporary arrangements of holiday classics performed by the school’s 11th and 12th grade students.

The centerpiece of the 2021 Glee Club winter concert will once again be the “Song of Christmas,” a nativity pageant that has been acted out by CASHS students for more than 70 years.

The concert will also uphold the long-standing tradition of inviting CASHS alumni and the Symphonette to join the Glee Club in a performance of the Hallelujah chorus.

The program will open with “Veni, Veni Emmanuel,” which is similar to the standard “Oh Come, Oh Come Emmanuel,” but it is sung in Latin, and it has some contemporary harmonies and rhythm. Also included in the program is the Hebrew folksong “Erev Shel Shoshanim.”

Elizabeth Stahl, director of the Glee Club, explained that there will also be a “pretty significant mix” of songs with piano accompaniment and songs performed a cappella. She said that it is important for kids to sing a cappella because it helps them establish their ear and correct intonation problems without the help of a piano.

“Educationally, I think that’s a really important thing,” said Stahl. “Also, I really like the sound of a cappella music.”

‘We were kind of starting over’

For an evening steeped in tradition, the rehearsals leading up to the performance were anything but ordinary.

As of last Monday, the state mask mandate is no longer in place, so people can choose whether or not to wear them.

“I have some kids masked and some not,” said Stahl.

The students were also socially distanced as much as possible in the choral room for safety, which makes bringing many voices together as one especially challenging.

“Previous to COVID, we sat right next to each other, and that helps in learning,” said Stahl. “You can listen to each other and hear what your classmates are doing. Particularly, when they’re learning a new song, they feel like they’re the only ones singing when they’re sitting socially distanced.”

Stahl said this effect was probably felt more strongly in the 9th and 10th grade students who held a concert of their own last Friday.

“I didn’t want anyone to ever think, ‘I can’t afford to be in Glee Club,’” said Elizabeth Stahl on the origin of the Glee Club’s concert wear donation program. She initially asked the community to donate new or gently used concert attire, and the project has grown to include six racks of gowns and one rack of black pants and white dress shirts for kids to choose from. Any student on free or reduced lunch can find something that they like for free; other students can buy an item for $15, “which is a whole lot cheaper than buying a whole new dress.” Students can also trade items they currently own for something on the rack. Learn more here.

“Most of my freshmen really hadn’t sung for 18 months,” she said. “We were kind of starting over.”

She added: “I could tell they were uncertain and then they couldn’t hear each other, but, boy, did they come a long way. I was really proud of the growth that they made, and they were able to put on a nice concert despite the hurdles they had to leap over.”

Continued support from the community

“I am very grateful for the community’s support because I really feel that I benefited immensely from having gone through the music program in Chambersburg,” said Stahl. “I think it’s really important that our community continues to support that and makes it known that it’s important to them to provide that for the kids at Chambersburg Area School District.”

Before Stahl became the director of the Glee Club, she came up through the CASHS music program including performing as accompanist with the Glee Club and Choristers. She took lessons at Cumberland Valley School of Music, and she went on to major in music education at Lebanon Valley College.

But it all started at a CASHS Glee Club concert she attended as a child.

According to Stahl’s mother, she was in the audience while one of her brothers was performing in the Glee Club on stage, and she said, ‘I want to be the Glee Club director someday.’”

Admission is $5, and tickets can be reserved by calling (717) 261-3346 or emailing cashsgleeclub@gmail.com. Tickets will also be available at the door.

[Featured image caption: CASHS Glee Club members rehearse for their winter concert, which will be held on Friday, December 17. Photo by: Caroline Dagnes.]