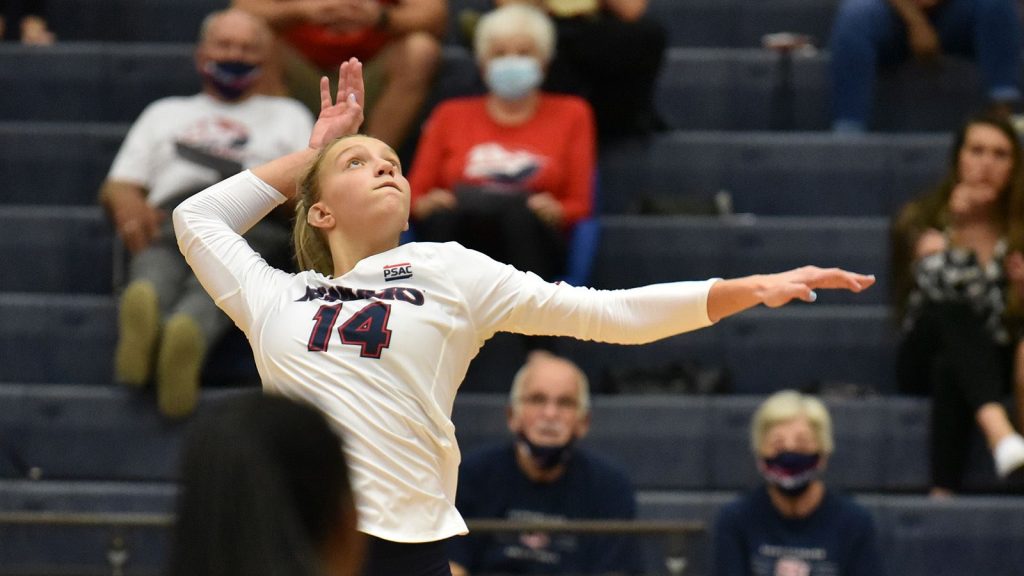 The Golden Bears defeated Shippensburg’s Raiders in a volleyball matchup Friday at Kutztown.

Shippensburg (5-10, 0-2 PSAC) had three players with double-digit kills. Freshman Emily Gardner (Avon, Ohio/Avon) posted her fourth double-double; she had a career high 19 kills in addition to 19 digs and three aces.

Freshman Kat Negron (Longwood, Fla./Lyman) posted her second double-double of the season; and her second in as many matches with career highs of 17 kills and 15 digs. Junior Rachel Verhoef (Greencastle, Pa./Greencastle-Antrim) had her ninth games of the season with double-digit kills, totaling 11, while junior Oyinda Agbale (Pittsburgh, Pa./Shaler Area) contributed nine kills.

The first set had the Raiders and the Golden Bears neck and neck, 16-16, before the Raiders eventually got a kill from Gardner and finished with a service ace from freshman Maddie Clabaugh (Gettysburg, Pa./Delone Catholic). Clabaugh hit .600 in the match with seven kills and just one error.

In the second set, the Raiders used a 7-0 run to comeback after a deficit of four points, but KU eventually rallied and took the second set. The third set the Golden Bears took control and had a .171 hitting percentage and only three errors, in comparison to the Raiders with nine errors.

In the fourth set, the Raiders dominated by starting out on a 13-3 run and kept the lead throughout the end of the set. In the fifth set, the Raiders and Golden Bears were tied at 7-7 before a 5-0 KU run proved to be the difference.