Heirlooms provide a sense of history. The wardrobe from Great Aunt Rose’s attic, an antique carved chair, and a rusty tool from a local auction carry a sense of history, of the people who used them. This holds true for heirloom vegetable varieties.

“Heirloom seeds are usually more than 50 years old; and have passed down from generation to generation,” said Kathy McFarland, Baker Creek Heirloom Seed Company  “This means they come with fascinating stories and heritage from years past.”

While the stories don’t enhance flavor, shelf-life, or color, they are a way to connect to our vegetable heritage. “Heirloom seeds have often handed down as family favorites,” said Christine Mayer, Director at Wilson College’s Fulton Center for Sustainable Living.

Heirloom varieties are open pollinated. That means that, unlike hybrids, seeds you collect from one year will produce the same plants the next year. “Using heirlooms helps preserve the gene pool; and assure that resilience from pests, diseases and climate are built into the system,” noted Mayer.

Home gardeners have the luxury to choose what they grow. Many choose heirlooms for taste, size, hardiness, qualities for cooking, and color not found in hybrids; and savings seeds from year to year ensures the same plants.

Some stories behind the names

The stories behind the names are a magnet for many gardeners.

‘Radiator Charlie’s Mortgage Lifter’  tomato came from radiator business owner “Charlie,” who came up with a large, meaty, and productive variety that he sold during the depression. He used the money to pay off his mortgage.

Japanese White eggplants are originally from Kyoto, Japan and considered a Kyoto heirloom. They are often found in home gardens and served in upscale restaurants. Their spongy texture quickly absorbs flavors such as ginger, soy sauce and miso as well as any sauces.

Tomatoes have a wide range of shapes, colors, taste, and growing habit. Cherry, slicer, beefsteak, or canning types are available as are pink, orange, white and ‘Green Zebra’ striped varieties.

Heirlooms may not be pretty but gardeners seeking tasty fruit often find them the best. “Most heirlooms taste better than the hybrid and genetically modified produce; because these have been bred and selected for generations based on how they taste,” said McFarland.

The Hinkel Hatz (translated: chicken hearts) pepper got its name because it resembles chicken hearts in size and shape. It is a rare Pennsylvania Dutch heirloom dating to before 1880. The peppers, reportedly cultivated for over 150 years, are usually red or yellow.

Fish Peppers date to the early 1800’s, grown by African Americans in Philadelphia and Baltimore. Black chefs made white paprika from the creamy white young pods for fish and shellfish white cream sauces, a secret ingredient passed down through oral history. The white paprika did not detract from the dish’s appearance.

The rediscovery of these peppers may be due to a barter of bees for seeds. In the 1940’s, Horace Pippin sought a remedy for his war wounds. Hearing that bee stings may relieve the pain, he bought bees from H. Ralph Weaver, in exchange for vegetable seeds which included the rare fish pepper. These seeds appeared in the 1995 Seed Savers Exchange Yearbook.

Several years ago, I discovered German Strawberry oxheart tomatoes. Strawberry refers to the shape and not the size. Oxheart tomatoes are large (up to 3 lbs.), heavy and meaty with few seeds.

Carol Kagan is a master gardener and author who has been active in herbal organizations for over 35 years. She has designed and maintained herb gardens and provided docent services at historic properties. She is the author of Herb Sampler. The book is a great resource for beginners who love herbs but aren’t quite sure how to get started; or have been unsuccessful in establishing a herb garden,

READ: Spring Garden Reminders: The garden is starting to wake up 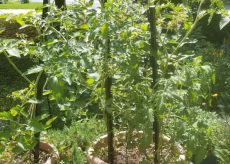 Watering your plants: Give me a drink please 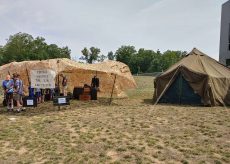 Step back in time: Ride in a Vintage WWII aircraft 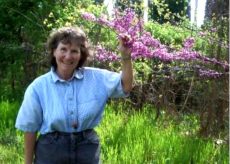