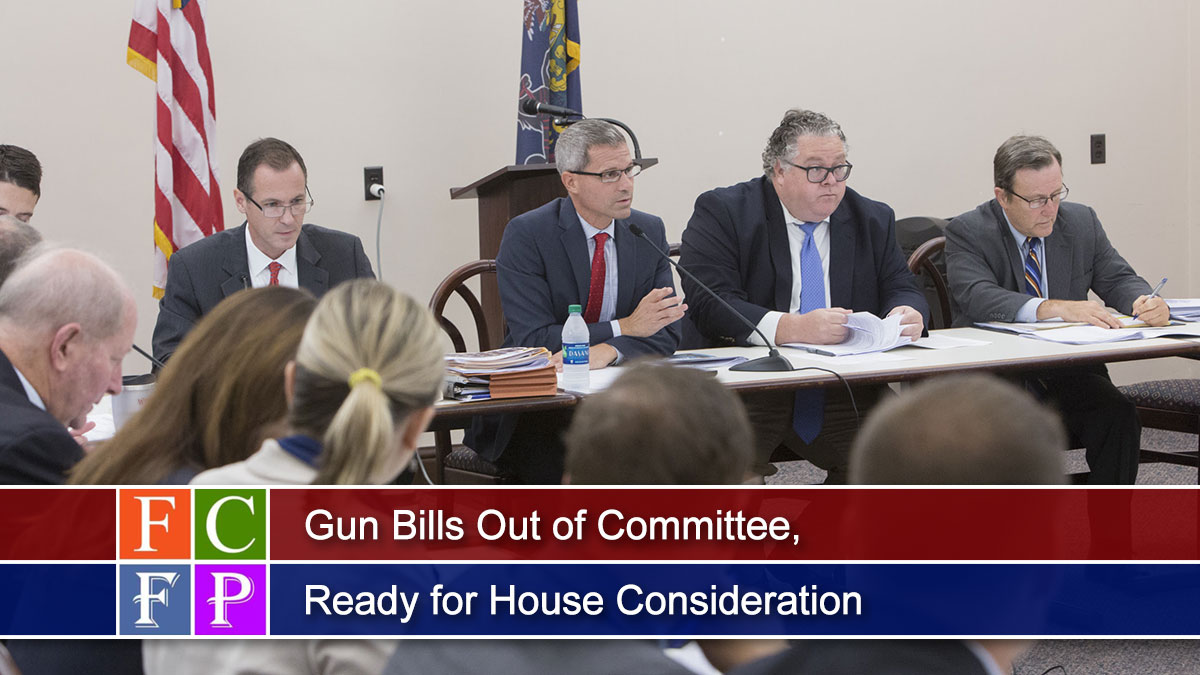 HARRISBURG (Sept. 27, 2019) – Rep. Rob Kauffman (R-Franklin), chairman of the House Judiciary Committee, led the committee in voting on a package of bills to keep firearms out of the hands of criminals and those with mental health issues.

“Many of the bills we focused on today were targeted at removing dangerous and violent criminals from our communities,” said Kauffman. “The bills largely were in response to the gun-related crimes we hear about in the news and increasing and strengthening penalties for criminal offenders. We are getting these violent offenders off the streets.”

“By targeting criminals who commit violent crimes, we will reduce the number of gun-related incidents while protecting the rights of law-abiding citizens,” said Kauffman. “Furthermore, the safety and protection of Pennsylvania citizens is not a partisan issue, and the bills we passed today are an example of that, as we voted on both Republican- and Democrat-sponsored bills.

“We also voted on legislation I authored that would provide more stringent oversight of firearms registered to those with mental health issues,” said Kauffman. “This is a segment of the population that needs our assistance to prevent crimes against others, as well as to prevent self-harm.”

House Bill 1835 would reduce the time period in which a person is required to relinquish a firearm after discharge from an involuntary mental health commitment for inpatient care and treatment from 60 days to 48 hours, and would require the Pennsylvania State Police to send all records relevant to a determination of whether a person is prohibited from possessing a firearm due to a mental health commitment to the National Instant Criminal Background Check System.

Another bill voted on by the committee (House Bill 165) would create a voluntary self-exclusion program, in which an individual could ask to be put on a list that would prohibit him or her from purchasing or receiving a firearm for one, three or five years.

“This legislation would enable those who understand that due to mental health issues they could be a danger to themselves or others the ability to self-regulate their behavior in so far as excluding themselves from legally owning a firearm,” said Kauffman.

Other Bills the Committee Considered Were:

• House Bill 303, which would allow a lawful firearm owner without a license to carry a firearm to transport a firearm in a motor vehicle for a lawful purpose, as long as the firearm is unloaded and not directly accessible to an occupant in the vehicle.

• House Bill 1066, which would provide remedies and legal standing for challenges to unlawful municipal regulation of firearms and ammunition preempted by state law.

• House Bill 1747, which would repeal current law that restricts firearm rights during the declaration of an emergency. The first law to be repealed provides that it is a crime to possess an otherwise lawful firearm on the public streets or on any public property during an emergency declared by a state or municipal government, subject to certain exceptions. The second law to be repealed empowers the governor to suspend or limit the sale of firearms during a disaster emergency declaration.

• House Bill 1805, which would remove a requirement that any taser possessed for self-defense purposes must be labeled with instructions regarding its use.

• House Bill 1852, which would require a court to impose consecutive sentences for crimes of violence that involve numerous victims.

All the above bills were approved by the committee and now go to the full House for consideration.

Absentee Ballot: Who Can Use Them and How to Do It

Tara Goetz is Franklin County’s November Employee of the Month