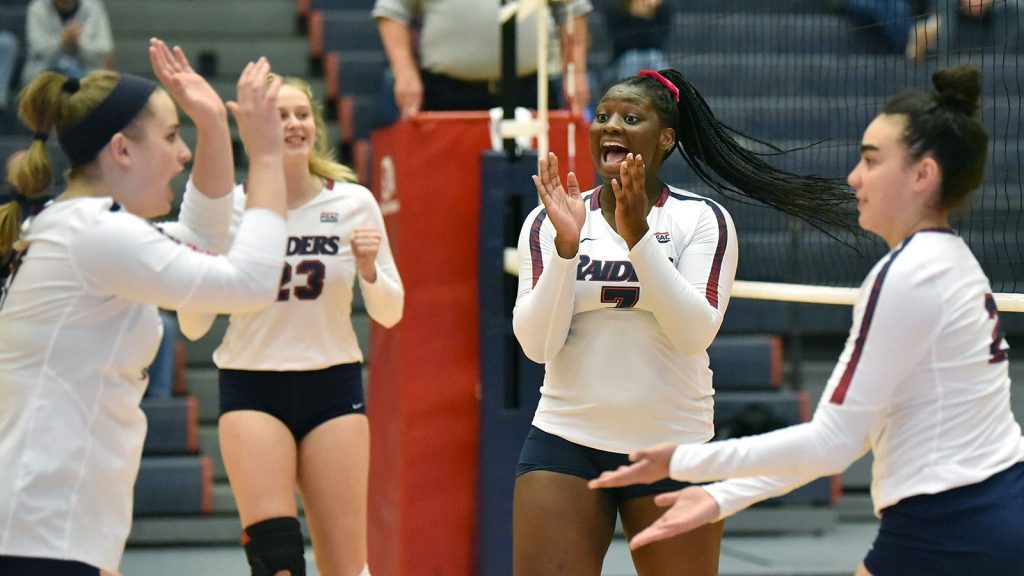 Homecoming weekend saw the Raiders take down Fayetteville State on Saturday afternoon with a 3-1 victory in a non-conference matchup over the Broncos at Heiges Field House. Set scores were 25-21, 18-25, 25-13 and 25-21.

The homecoming victory gives Shippensburg University an overall 10-13 win-loss record for the season; and a,3-5 Pennsylvania State Athletic Conference record.

Shippensburg (10-13, 3-5 PSAC East) had three players with double-digit kills. Freshman Kat Negron (Longwood, Fla./Lyman) had her sixth double-double of the season with 16 kills, 10 digs and two assists. Negron finished the night hitting .343 from the floor.

Freshman Chelsea Foulis (Wilbraham, Mass./Minnechaug Regional) had a career high of five blocks to go along with nine kills and an impressive .467 percentage. While freshman Emily Gardner (Avon, Ohio/Avon) had 16 digs, her ninth time this season with double-digit digs.

Fayetteville State (13-6) served five aces had two players with double-digit kills. The Raiders hit .278 compared to .165 for the Broncos. Shippensburg served six aces and had 63 kills to the Broncos’ 44 kills.

The Broncos had a strong start with a 6-3 lead. The Raiders went on a 10-point run to lead in the middle of the set. The Broncos fought back with multiple five-point runs to reduce the deficit. A kill from Gardner at 24-21 secured the opening set for the Raiders.

In the second set, the Broncos were determined. The set was tied at 7-7 and Fayetteville went on a 9-2 run to lead in the middle of the set. The Broncos claimed the second set after a Raider error.

SU came into the third set strong with a 7-3 lead. The Broncos were unable to find any responses against the Raiders who only had four errors in the set. Kills from freshman Maddie Clabaugh (Gettysburg, Pa./Delone Catholic) and Agbale closed out the third set.

In the fourth set, SU and FSU were neck and neck. Agbale had three back-to-back kills at 16-16 to increase the Raiders homecoming lead. The Broncos saved four match points until a kill from Anderson secured the win.

Shippensburg is back in action at 7 p.m. Friday when it hosts Kutztown at Heiges Field House.