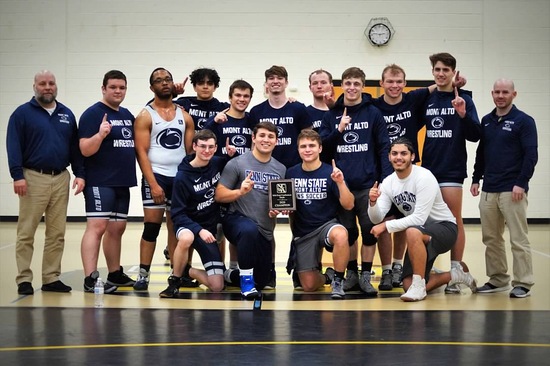 ALLEN, TEX. – Penn State Mont Alto‘s wrestling team wrapped up competition for the 2019-20 season at the NCWA National Championships late last week in Allen, Texas. PSUMA sent a total of eight wrestlers to the national championships. The team finished 21st out of 82 institutions around the country.

Conner Herron (Frederick, Md./Tuscarora) and Mason Blank (Lancaster, Pa. Lampeter-Strasburg) both competed at 133 pounds and had top-12 finishes. Herron won his first three matches of the national championships, which included a pin over Cody Armstrong in the round of 16. He dropped his following two consolation matches. Highlights for Blank included a 7-5 and 4-2 decision wins. He dropped his second consolation match by a narrow 4-3 score to Grand Valley State University’s Trevor Dusty.

At 141 pounds, Jack Coulston (Carlisle, Pa./Boiling Springs) became the first All-American in program history at that weight class, finishing the national championships with four wins. Coulston earned a huge 17-1 tech-fall win over Brian Gembarski and a 2-0 victory over Ethan Boren. He then earned All-American status with a 14-3 major decision over the University of Florida’s Nicholas Vugman. He was unable to finish the last day and had to default out of the tournament.

Ron Schilpp (Severna Park, Md./Severna Park) also made his debut at nationals and had a solid outing at 165 pounds. The freshman also went 2-2 and won in his round of 32-consolation bracket over Alex Fogarty from Maine Maritime Academy. Nick Kostyak (Carlisle, Pa./Boiling Springs) was just as impressive finishing 12th with a 4-2 record. He pinned Jacob Fernandez in 2:55 to earn 12th place in his respective bracket.

The final PSUMA wrestler who competed at the National Championships was Eric Wilson (Carlisle, Pa./Boiling Springs). He won his first match over Kyle Gossard by a narrow 5-4 decision before dropping his next two bouts.

November 13, 2019
Thanks for subscribing! Please check your email for further instructions.