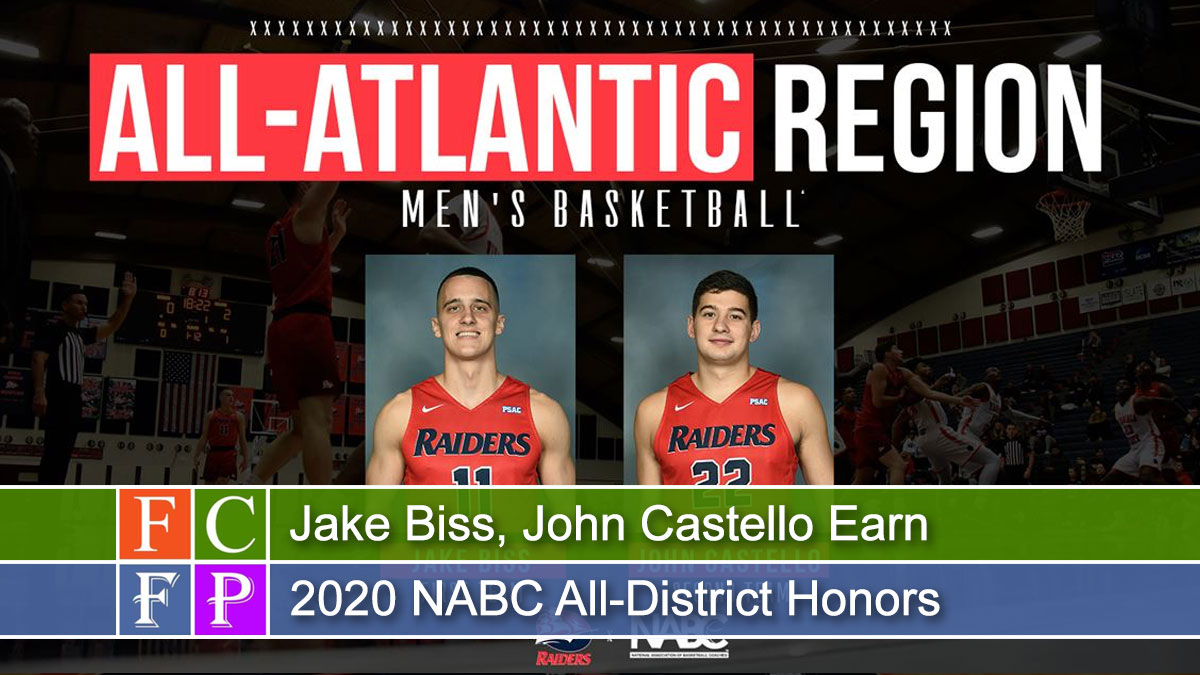 The NABC Coaches’ Division II All-District teams and coaches recognize the best men’s collegiate basketball student-athletes and coaches in each division. Member coaches of the NABC in NCAA Division II select and vote on the awards. There are 11 honorees (six First Team, five Second Team) from each of the nation’s eight districts.

Biss, the 2019-20 Pennsylvania State Athletic Conference (PSAC) Eastern Division Athlete of the Year, led the Raiders in scoring (15.9) and ranked fourth in the conference in averaging 4.4 assists per game. He shot 40.3 percent from three-point range and 89.9 percent at the free-throw line. Biss posted double-digit points in 25 games, including 10 games of 20 or more points. He recorded four or more assists in 19 games, including eight games of six or more assists.

Castello, a 2019 All-PSAC Eastern Division First Team honoree, was the PSAC’s leading rebounder this season (9.4) and ranked among the Top 30 players in the nation in both rebounds per game and offensive rebounds per game (3.6). His career-high 12 double-doubles led the PSAC. He reached double figures in 23 games, including seven games of 20 or more points. Over the final 20 games of the season, Castello averaged a double-double (13.5 PPG, 10.4 RPG) while shooting 45 percent from the field, 36 percent from the three-point range and 76 percent at the free-throw line.

Shippensburg won the PSAC Eastern Division and finished second to IUP in the 2020 PSAC Men’s Basketball Championships. The Raiders posted a 24-7 record and entered the NCAA Atlantic Region Championships as the No. 4 seed.

March 6, 2020
Thanks for subscribing! Please check your email for further instructions.