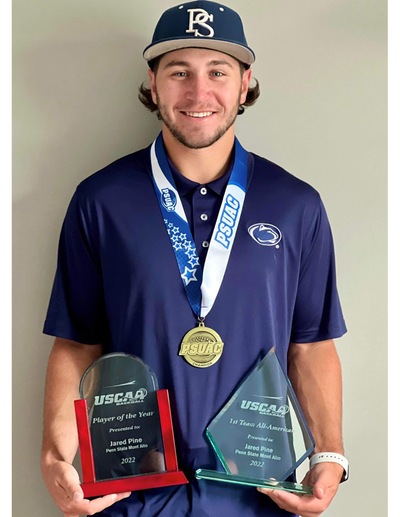 During late summer nights at the Tuscarora Softball Complex in Mercersburg, Pennsylvania, a little boy by the name of Jared Pine could be spotted walking around the complex, dragging a bat with him wherever he went. Upon the completion of his father’s slow-pitch softball games, he begged and pleaded for anyone to throw him some batting practice. He refused to leave the complex because he loved baseball so much.

The same boy reached the pinnacle for small college baseball players nationwide. Jared Pine finished off his 2022 season by being named the United States Collegiate Athletic Association’s Player of the Year, the top individual honor among the nearly 30 baseball institutions that compete in the USCAA.

“I am proud that I was named the Player of the Year, but winning that ring is the next goal of mine”, states Pine. “I have that never satisfied mentality.”

The Player of the Year award capped off an accolade-filled season for Pine. In addition to being named Player of the Year, he was also a First Team All-American in the USCAA. A few weeks prior, he was named a First Team All-Conference member by the Pennsylvania State University Athletic Conference. In 2021, Pine was also a First Team All-American and First Team All-Conference member by hitting .442 with 42 hits and 24 stolen bases. “I’m proud that I earned the Player of the Year award. There were a lot of players that also had great seasons, so it’s an amazing feeling to get recognized”, said Pine. Pine was an important piece to the Penn State Mont Alto baseball puzzle this season. The shortstop helped lead the squad to its first PSUAC title in five seasons by defeating Penn State DuBois in back-to-back games. Penn State Mont Alto went 28-11 overall, eclipsing the school record for wins and qualifying for the Small College World Series.

Pine isn’t your typical Player of the Year award winner. While others will use big power seasons to gain accolades, Pine utilized his game changing leadoff hitter and defensive abilities to earn the award. He often provided Penn State Mont Alto with momentum shifting at-bats early in games and with key defensive plays. Pine was difficult to get out for opposing PSUAC competition all season long. Pine ranked near the top in several offensive categories for the Mont Alto Nittany Lions this season. The leadoff hitter batted .405 this season with a .484 on-base percentage, both statistics putting him near the top of the USCAA leaders. In 37 games played this season, he reached base at least once in all but three games.

He was the leading run scorer for an offense which recorded 244 runs over 39 games, ranking top ten nationally in total runs scored. When Pine reached base, he was often a threat to steal bases. His 23 stolen bases ranked top ten amongst all base stealers in the country.

“Their job was to not let Jared reach base to start the game”, said Penn State Mont Alto Head Baseball Coach Shawn Kissel.

“Jared is the spark of the team. He gets on base; he can change the game with his speed. He is one of the smartest baseball players I’ve ever met. I’ve never witnessed a guy who can change the outcome of the game like he can”, said Kissel.

“It’s not just his offense, it’s his defense too. He will make plays that other players would never think about making”, said Kissel. “He just does the little things that many others wouldn’t consider.”

Coach Kissel has witnessed many shortstops during his coaching days; however, the way Pine thinks on the field separates him from the competition. Kissel recalls periods during the season that Pine displayed his baseball IQ. There were numerous times this season where he had to field a ball in between the shortstop and third base hole. Often, the shortstop will not be able to make the play on the runner heading to first base. Instead of trying to make the throw, Pine will instruct his fielders to be in position to try and get the other baserunners out when they least expect it. The ability to digest an entire play is something not every infielder possesses.

When Pine steps into the batter’s box, it’s a chess match versus the defense. Compared to other leadoff hitters who may take a pitch or two to start an at-bat, Pine looks for a fastball early in the count. He wants to make good contact with the first good fastball he sees, which often occurs on the first pitch of the at-bat.

Pine reads the defense’s positioning and looks to record a base hit in a location the defense is not playing. “If I can get a ball through the middle of the infield or to a spot where the infield must move, I have a good chance to reach base via an infield single”, said Pine. Being a left-handed batter gives Pine a slight advantage by being closer to first base while batting. “Especially being left-handed, eliminating those extra couple of steps helps, many of my hits are beat out singles.”

Teammate Chance McClure is glad he wasn’t on the other side of the field from Pine. McClure helped recruit Pine to Penn State Mont Alto upon the hiring of their childhood coach Kissel in 2019. The chemistry between the two was a boon for the Mont Alto Nittany Lions as they won numerous youth championships together. “You knew it was going to be a good day when he reached base to start a game”, said McClure.

Pine used his batting strategy to eclipse .400 on the season for the third consecutive season, batting .402 this season while recording 53 hits in 131 at-bats. His batting average ranked near the top ten nationally.

“If he gets on base two times a game, we will probably win the game,” said Kissel. “When he gets on base, he usually steals second base, and our other top hitters try to drive him in. If we score the first run of the game and back that up with our defense and pitching, it’s a gamechanger to have him on base early in the game.”

Penn State Mont Alto went 20-3 this season when Pine reached base twice or more. A true testament for a player who provided nearly a fifth of the team’s scoring. Pine’s approach at the plate reaping rewards for the entire team and its success.

Pine will be the first to credit some of his defensive success on the reunion between him and teammate Hayden Kissel. The two, along with McClure, played youth baseball under Kissel. When Pine signed to play collegiate baseball at Frederick Community College in 2017, he had no idea Hayden Kissel was also set to play at the same college. The two played their first-year seasons together in the middle infield for Frederick.

In 2019 Pine transferred to Penn State Mont Alto and Hayden joined the following season. The two suddenly formed one of the top middle infield combinations in the PSUAC. Pine tied for the conference lead with 16 double plays turned this season, many of them coming with the help of Kissel at second base.

In the PSUAC playoffs, Pine converted on 21 of 22 fielding chances as Penn State Mont Alto won its first PSUAC title since 2017 by defeating Penn State DuBois in back-to-back championship round contests.

Defense was the name of the game for the Mont Alto Nittany Lions down the season’s stretch run as they didn’t allow more than five runs per game for 27 of the last 28 games of the season.

Upon earning the top individual recognition in the USCAA, Pine still has his sights set high for 2023. He still has one goal on his list and that is to win the Small College World Series Championship.