Ship U: Jazmin Petrantonio named the D2 Honda Athlete of the Year 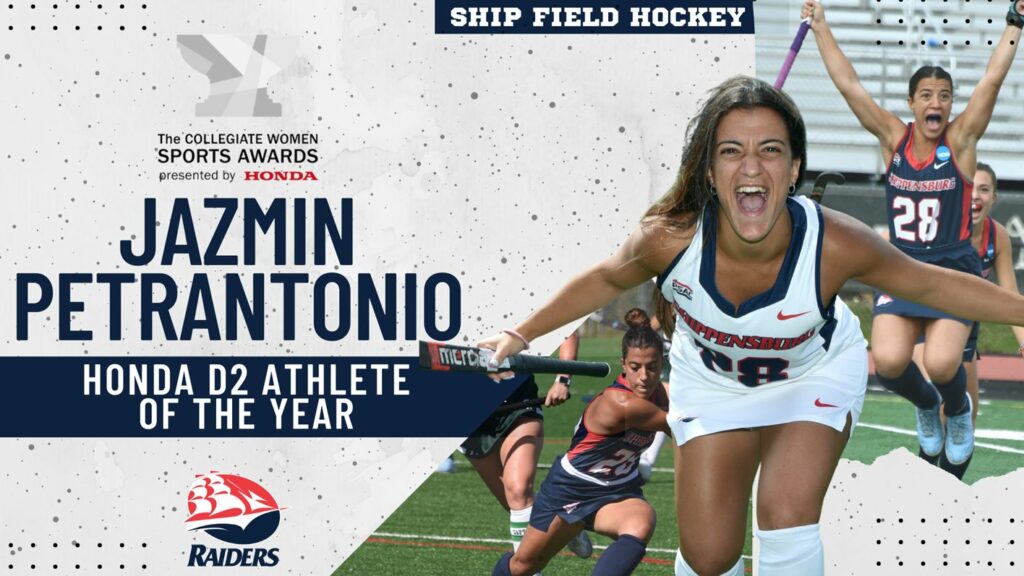 A two-time National Field Hockey Coaches Association (NFHCA) Division II National Player of the Year (2021 and 2018), Petrantonio is the first Raider to receive this award and just the fourth player from the Pennsylvania State Athletic Conference (PSAC) to be honored.

Petrantonio will be presented with this honor on a live telecast on CBS Sports Network on June 27 (6 p.m. PT / 9 p.m. EST) in the Founders’ Room at the Galen Center on the campus of the University of Southern California in downtown Los Angeles.

“It’s really hard for me to put into words the way I feel,” Petrantonio said. “It is a huge honor to receive this award, but that’s not adequate to reflect the way I feel. It is one of those things that nobody prepares you, because only a select few athletes even get the chance to be recognized as a finalist, and that’s what makes this award so special.”

“But if there is something I can say about getting recognized this way, it’s that it doesn’t matter how big your ambitions are, chase it, grab it and run with it.”

“Never in a million years could I have I thought that a student-athlete at Shippensburg, a small town in Pennsylvania, who plays a sport that is still emerging in popularity in the United States, would’ve been in this category,” added Petrantonio. “So, it is something that I will be forever grateful for, for the rest of my life, as much as I will be forever grateful with every single person I have come across during my stay at Shippensburg. Thank you, Shippensburg Athletics, the coaching staff, my family, my friends and every single person that helped me where I am today.”

Petrantonio lead the nation in goals

A native of Buenos Aires, Argentina, Petrantonio led the nation in goals per game (1.85), points per game (4.2), goals (37) and points (84). She also totaled 10 assists. Petrantonio scored or assisted in 19 of SU’s 20 games this season; the only game in which she did not record a point was in the national semifinal.

Petrantonio concluded her historic career with 106 career goals, third-most in NCAA Division II history. In her 79 career games with the Raiders, Petrantonio totaled 248 career points (106 goals, 36 assists) and 29 game-winning goals. She also finished her career as the leading scorer in the history of the NCAA Division II Field Hockey Championships, having scored 10 career goals in eight career NCAA Tournament games.

“On behalf of the coaching staff and the team, congratulations to Jazmin for being named the Division II Honda Athlete of the Year,” said head field hockey coach Tara Zollinger. “We are proud of her accomplishments on the field, off the field, and within our Shippensburg community. As a trailblazer on the field, Jazmin elevated the game while she competed with passion and respect. Off the field, Jazmin was a dedicated student and was involved with many university organizations. She is hard-working, passionate, committed and extremely deserving of this recognition for all that she has done as an athlete and student.”

“On behalf of the entire Shippensburg University community, I congratulate Jazmin on this amazing achievement,” said Dr. Charles Patterson, Shippensburg University President. “She continues to make us proud, representing the very best of her sport, her fellow student-athletes and her alma mater. It’s been an honor to watch her success as a student-athlete and campus leader and to now earn this recognition on a national level.”

“We could not be more excited for Jazmin, our field hockey program, the athletics department, and the university,” said Carrie Michaels, Senior Associate Director of Athletics and Senior Woman Administrator. “This is such a tremendous honor, and we are fortunate to share this experience with this outstanding student and athlete. What a testament to her excellence. We have been in awe of her prowess on the field since she began her journey at SU and have truly enjoyed her as a person. We are so proud and humbled by this amazing recognition.”

The CWSA, entering its 46th year, has honored the nation’s top NCAA women athletes for their superior athletic skills, leadership, academic excellence and eagerness to participate in community service.  Since commencing its partnership in 1986, Honda has provided more than $3.4 million in institutional grants to the universities of the award winners and nominees to support women’s athletics programs.

For more than 60 years in the U.S., Honda has been committed to making positive contributions to the communities where its associates live and work. Honda’s mission is to create products and services that improve the lives of people while conducting its business in a sustainable manner and fostering a diverse and inclusive workplace. Accordingly, Honda believes in helping people reach their life’s potential through its focus on the areas of education, the environment, mobility, traffic safety and community. Learn more at http://csr.honda.com/.