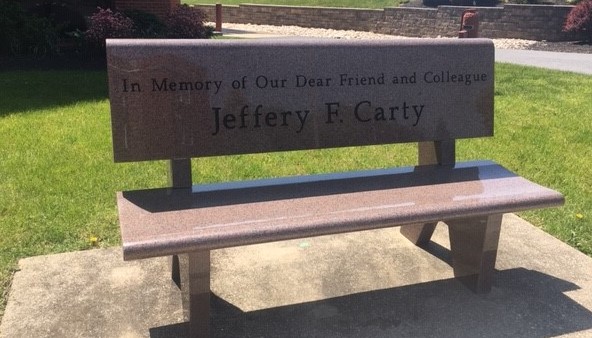 The late Jeff Carty left a legacy at Waynesboro Hospital, and a void in the larger community.

“I had the privilege of calling Jeff ‘boss’ for a few days short of 23 years and what a great run it was,” said Duane Barnes. “I am positive those of us who interacted with Jeff would say he had a heart of gold. He showed endless love towards his family and treated everyone who crossed his path with the utmost kindness and respect. Calling him “boss” is doing him an injustice. Big brother is a much better description.”

Barnes is WellSpan’s Manager of Accounting, and worked with Carty for more than two decades.

For 35 years, Jeff served the community and advanced the mission of the local health system. He was the organization’s vice president for finance at the time of his death. His responsibilities were more than just keeping the non-profit health system’s books in order. He also strove to enhance community partnerships and support local organizations.

“Learning of Jeff’s passing was incredibly shocking and heartbreaking,” recalled Pat O’Donnell, President of WellSpan-Summit Health, and Executive Vice President, WellSpan Health. “Not only was Jeff a respected and valued member of our leadership team, I was proud to call him a friend. He advocated for this health system and for our community every single day. There hasn’t been a day that we haven’t missed his passion and leadership.”

Following his passing, his colleagues continued to find ways to honor Carty. Former Chief Financial Officer, Kim Rzomp, who retired from the health system last year, worked with Jeff for more than thirty years. She said his personality was his greatest asset.

“He never lost his cool, and frustration with people was not in his lexicon. If I had a problem causing me frustration, I could seek out Jeff just to talk it through. He was so calm; never losing his temper,” she remembered. “We often had complex issues with many options as to the right path. Even if we had already made a decision, Jeff continued to think about it. He would write me to say he wanted to offer a different view. We lost a great thinker when we lost Jeff.”

“Our team lost a good friend. The grief in the workplace was palpable. We needed to grieve as a finance department family,” she said. “One of the best tributes was Jeff’s first missed birthday. The entire Finance staff wore neckties to work as a tribute. And, as you can imagine as a primary female workforce, many had to phone a friend to find a necktie. In a workplace more and more casual, Jeff never came to work underdressed. In fact, I’m not sure I ever saw Jeff without a tie.”

A more permanent tribute to Carty was put in place this month – a bench in front of WellSpan Waynesboro Hospital, bearing his name.

“Jeff was such an incredible colleague and friend and walking into work each day we all continue to feel that loss,” said Melissa Dubrow, Vice President for Administration and Chief Operating Officer of WellSpan Waynesboro Hospital. “Seeing his name on this bench is a beautiful reminder of all the ways Jeff made our community stronger. It’s a way to mark his contributions in history, and in true Jeff form, it’s very practical. I imagine our visitors and patients resting here, enjoying the beautiful garden around them as they wait for a ride.”

The bench was a gift, organized by the organization’s Senior Management Team, of which Jeff had been a part.

“Jeff often commented how much he appreciated the garden in front of WellSpan Waynesboro Hospital,” explained Carolyn George, Vice President of Corporate Finance. “We wanted to ensure his contributions were remembered. I know the impact he made on us, and it is comforting to know this bench will memorialize him for future generations of patients.”

Staff Report - July 10, 2020 0
He was a member of the Chambersburg Bible Church and enjoyed spending time with his family; working on his farm in West Virginia; and golfing.

October 26, 2019
Thanks for subscribing! Please check your email for further instructions.