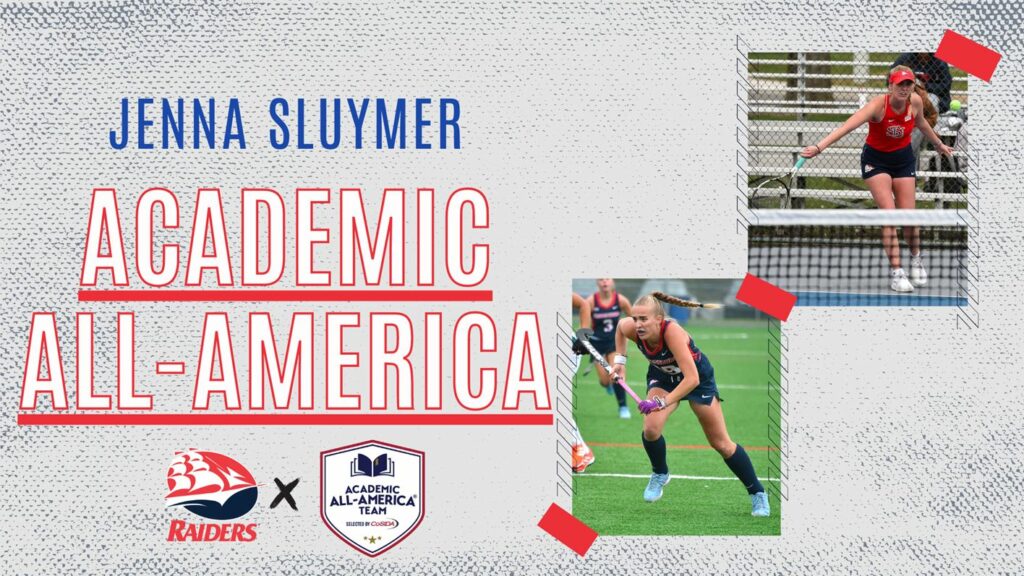 Shippensburg University senior Jenna Sluymer (Nieuw-Vennep, The Netherlands/Haarlemmermeer Lyceum, Hoofddorp) was named Wednesday afternoon to the 2021-22 Division II Academic All-America ® At-Large Second Team, an award that recognizes the nation’s top student-athletes for their combined performance on the field and in the classroom.

Sluymer graduated this month as a double major in marketing and management (concentration in international management) with a 3.75 grade-point average (GPA).

It is the first time in school history that a dual-sport athlete has been named to the Academic All-America ® At-Large Team; Sluymer competed in field hockey and tennis for the Raiders.

It is the first time since 2005 that three Raiders from the same sport were recognized as part of the Academic All-America ® Team. That year, three SU Softball players were honored: Liz Corr, Anna Corr, and Jaime Dacey. Albright, Sluymer and Petrantonio are the first SU Academic All-Americans ® in the At-Large category since Gracee Tothero of Women’s Swimming in 2019-20.

A two-time National Field Hockey Coaches Association (NFHCA) All-American (2018, 2021) and a three-time All-PSAC Performer (2021 First Team, 2019 Second Team and 2018 Second Team), Sluymer ranked second in the nation in goals per game (1.28) and points per game (2.9) and seventh in assists per game (0.7). Her 24 goals more than doubled her previous career high and included a team-best nine game-winning goals. Her 10 assists and 58 points were also career highs.

Among her nine game-winning goals was the opening tally in Shippensburg’s 3-0 victory over West Chester in the national championship game. The goal came less than 90 seconds into the match. Sluymer scored at least one goal in 14 games this season, including natural hat tricks in back-to-back games in October, and a single-game best four goals against Mercyhurst. She was held without a point in just four games.

A 2021 National Field Hockey Coaches Association (NFHCA) First Team All-American and All-PSAC First Team forward, Sluymer helped Shippensburg to an undefeated 20-0 season, its second-ever PSAC Championship and its fifth NCAA Division II National Championship. Sluymer was also a two-time NFHCA National Athlete of the Week in 2021. She was selected to the 2021 NFHCA National Academic Squad and was also named the 2021-22 PSAC Fall Top 10; the first SU field hockey honoree for the award since 2014.

Sluymer was part of the women’s tennis team this spring and was named to the 2021-22 All-PSAC Second Team singles squad. Sluymer played primarily at No. 1 singles and had a 6-2 spring record, going 4-2 in PSAC East play. She totaled the most wins by an SU player in seven years and is first Raider to be named to the all-conference team in tennis since 2011.

The Academic All-America ® Team is selected by the College Sports Information Directors of America (CoSIDA). While most of the Academic All-District and All-America ® teams focus on specific sports such as football, basketball or volleyball, the At-Large category features a collection of several sports – making Sluymer’s selection especially prestigious.