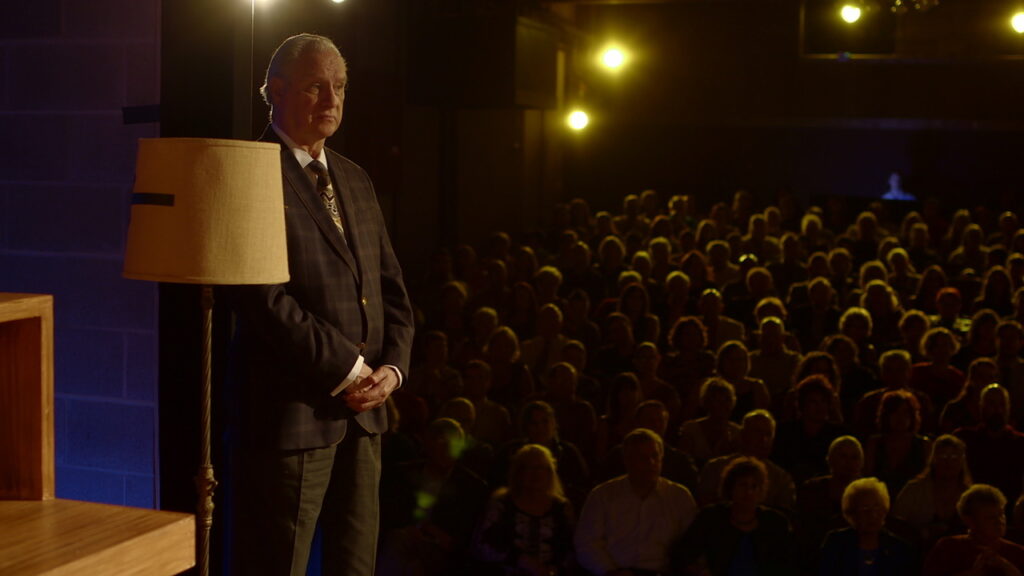 Fayetteville native John Putch returns to Totem Pole to show THE FATHER AND THE BEAR one more time to benefit the theater which he called home for over 25 years.

“Nothing is more special than showing this film at the very place that is depicted in the movie,” a news release about the showing declares.

An extra for Totem Pole patrons includes a live 8 p.m. post-show “Talk Back” with Producer, Writer, Director Putch and cast members following the Aug. 26 showing. Tickets are general admission only. There is no assigned seating.

All proceeds will benefit Totem Pole Playhouse. The Father and the Bear is not eligible for discounts. Doors open 30 minutes before showtime.

John was born in Franklin County and grew up in Fayetteville, attending Fayetteville Elementary School as a child. He is the son of the late Totem Pole artistic director Bill Putch (1924-83) and actress Jean Stapleton (1923–2013).

He and his sister Pam spent their childhood at the little off-Broadway theater in the woods in Caledonia State Park. Once Jean was cast as Edith in the TV sit-com, the family spent the filming season for All in the Family in California. They returned to their Fayetteville home during during summers, where Bill Putch continued to run Totem Pole.

As a child, John’s life revolved around Totem Pole, first appearing on stage at age 5.

Since 2007 he has returned to south central PA to film his independent movies.  Between 2007 and 2015, John filmed and released four films featuring his beloved hometown.  The Route 30 Trilogy began in 2007 with the original Route 30 film starring David DeLuise and Dana Delany.

Three years later, John brought the band back together to shoot the wacky Route 30, Too!,  a cross between the X-files and Blazing Saddles.  Then in 2013, John completed the Trilogy with Route 30 Three!, an epic wrap-up to the warm and humorous trilogy.

Next up was the drama The Father and the Bear, shot entirely on location at the Totem Pole using some of Totem pole’s favorite actors in its cast.   David DeLuise returns to play opposite Wil Love. It marks the first time DeLuise was back at the Pole since the first Route 30 movie.

What he’s been up to:

John comes home every summer to check on his first love, Totem Pole Playhouse; and carry out occasional fundraisers for the theater. He visits old friends, takes trail rides on motorcycles like he used to in younger days with friends; and he renews connections with the theater he literally grew up in.

An upcoming Hallmark Christmas special set for release during the 2022 holiday season is his latest creative work. Filmed last January, it features the Radio City Rockettes and Ann Margaret.

He guest starred on his mother’s series All in the Family playing a Boy Scout in 1973. Producer Norman Lear later cast him as Bob Morton in the sitcom One Day at a Time. He appeared in 14 episodes from 1976–1983.

For much of the 1980s into the 1990s he guest-starred in a number of notable television series; including Family Ties, The Fall Guy, The Love Boat, Hill Street Blues, Newhart, Star Trek: The Next Generation, 21 Jump Street, Seinfeld, Home Improvement and Wings. He also had a starring role in the sitcom Room for Two and a major role in The Wave (1981).

In 2007 Putch began making a trilogy of comedies surrounding US Route 30 in his home state of Pennsylvania. Route 30, Route 30, Too! and Route 30, Three! respectively take place in south central Pennsylvania in Franklin and Adams counties.

“I took those inspirations, modified them and prepared a set of rules that would govern the making of the film,” he said. “I restricted the crew to eight people; and insisted the actors be responsible for their own
wardrobe and make-up. The only equipment that could be used was whatever would fit into one car and an SUV. The films would be shot in less than 18 days.”

He has been making films this way since 2005 when he shot Mojave Phone Booth with only 6 crew, some actors, a script and a camera. The process and result was so rewarding that he continued.

From 2007-2014, John made three more films in Fayetteville. The “Route 30 Trilogy” helped perfect this
method and make it second nature. He calls the trilogy and Mojave Phone Booth the most awarded films he’s ever made, and the most satisfying.

The Father and The Bear combines the best parts of working with an ensemble minded group of people using this no frills method.

“The story is very personal,” he said of the film. “My mother passed with dementia (jeanstapleton.net) and the film takes place in my childhood home, where my father operated his beloved summer theater, the Totem Pole Playhouse. The archival footage used throughout the film was lovingly shot over a period of 30 years by John and his father.

The lead actor, Wil Love, and many of the cast performed at Totem Pole over Bill Putch’s lifetime, and John’s. They remain close friends.

“When you see them as young people in the archival footage, you are seeing them from hundreds of shows they performed in under the direction of my father,” he said. “Seeing this work incorporated into my fiction is fascinating to me.”

Totem Pole Playhouse is a summer stock theater nestled amid the pines in the picturesque Caledonia State Park. The theater is fully accessible for mobility impaired patrons; two entrances can accommodate wheelchairs and walkers. Its concession stands serve soft drinks, water, popcorn, crackers as well as a varied candy selection. There are no columns or barriers to obstruct viewing; and the theater is air conditioned for comfort.