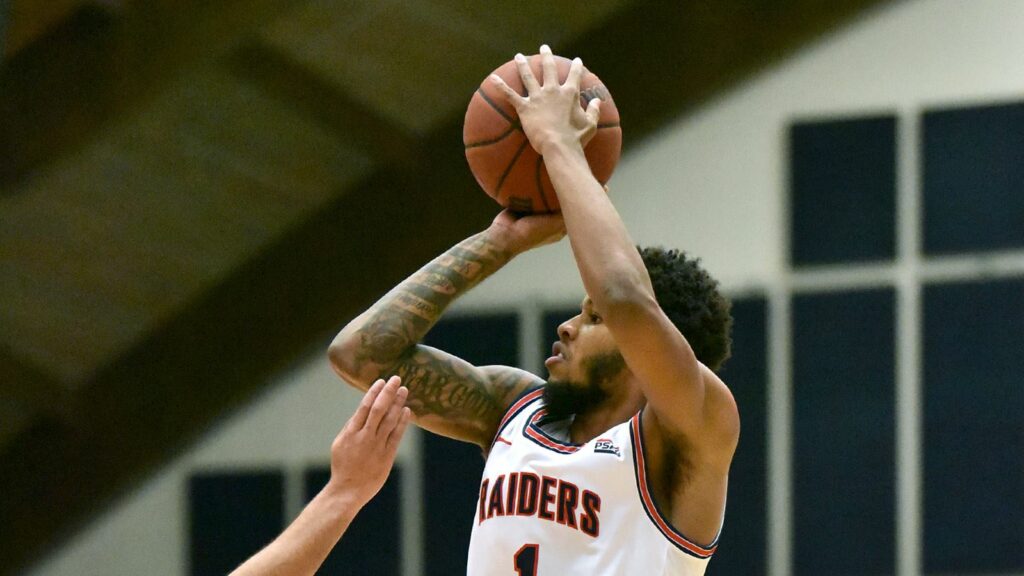 The Mountaineers, who never held a lead, still trailed by 14 points with 90 seconds left. They proceeded to make all six field-goal attempts down the stretch, including a pair of three-pointers, and forced three SU turnovers to make the final seconds quite interesting.

In a three-point game, Marcus Friend drew a foul on a three-point attempt with one second left. After making the first free throw, Friend missed the second and then intentionally missed the third. SU converted the ensuing in-bound after the deadball and made two free throws to end the game and win its 11th-in-a-row over Mansfield.

Johnson, who comes off the bench as SU’s “sixth man,” posted his first double-double as a Raider with 11 rebounds in addition to his career-high 29 points. Johnson made 11-of-17 from the field; the 11 field goals are also a career high. His previous best in a single game was 24 points against Neosho County back in 2019 while playing for Highland Community College.

Junior Carlos Carter (Indiana, Pa./Indiana) scored 14 of his 16 points in the first half. Carter shot 7-of-14 from the field and added six rebounds, two steals, one block and one assist.

Graduate Jake Biss (Latrobe, Pa./Greater Latrobe) put up 15 points, five rebounds, five assists and one steal. Biss was 5-of-9 from the field and 2-of-4 from three-point range. He also sank the game-clinching free throws with 0.3 seconds left.

Shippensburg shot 50 percent from the field for the second time this season. SU was 6-of-15 from three-point range in the first half but 0-for-5 in the second half. The Raiders were 80 percent (17-of-21) at the free-throw line, including 16-of-19 (84 percent) in the second half.

Mansfield shot 62.5 percent from the field in the second half. Justice Smith scored 28 points and had six rebounds, three assists and two steals. Jaz Farrell put up 17 points, four rebounds, and one assist. Friend converted a game-high seven assists, scored eight points, got four rebounds and had two steals.