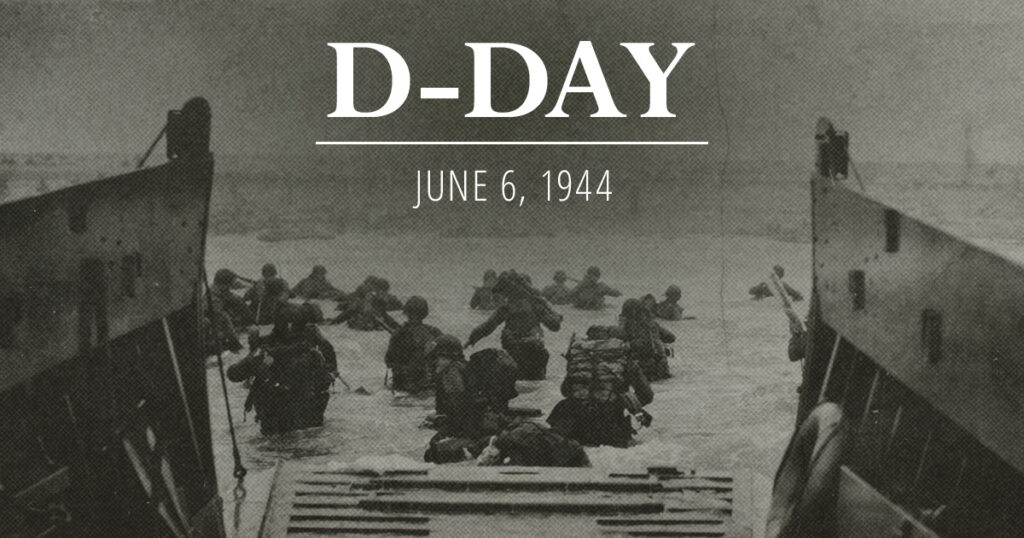 Operation Neptune also known as D-day happened on June 6, 1944, 78 years ago. More than 160,000 Allied troops landed on the French coastline, to fight Nazi Germany on the beaches of Normandy, France. General. Dwight D. Eisenhower called the operation a crusade in which, “we will accept nothing less than full victory.”

More than 5,000 Ships and 13,000 aircraft supported the D-Day invasion, and by day’s end, the Allies gained a foothold in Continental Europe. The cost of lives on D-Day was high.

More than 9,000 Allied Soldiers were killed or wounded, but their sacrifice allowed more than 100,000 Soldiers to begin the slow, hard journey across Europe, to defeat Adolf Hitler’s troops.

Theodore Roosevelt Jr. is known for his World War II service, directing the troops at Utah Beach during the Normandy landings, for which he received the Medal of Honor. General Dwight Eisenhower (1890-1969) was appointed commander of Operation Overlord.

Eisenhower selected June 5, 1944, as the date for the invasion; however, bad weather on the days leading up to the operation caused it to be delayed for 24 hours. On the morning of June 5, after his meteorologist predicted improved conditions for the following day, Eisenhower gave the go-ahead for Operation Overlord.

He told the troops: “You are about to embark upon the Great Crusade, toward which we have striven these many months. The eyes of the world are upon you.”

In the months and weeks before D-Day, the Allies carried out a massive deception operation intended to make the Germans think the main invasion target was the narrowest point between Britain and France which is Pas-de-Calais. Rather than Normandy.

They also led the Germans to believe that Norway and other locations were also potential invasion targets. Many tactics were used to carry out the deception, including fake equipment and a phantom army commanded by George Patton.

June 5, 1944, was the date chosen for the invasion, but the bad weather leading up to the operation caused it to be delayed for 24 hours. Finally on the morning of June 5, after listening to the weather and learning of the improved conditions for the following day, General Eisenhower gave the order to proceed with Operation Overlord.

Later that day, more than 5,000 ships and landing craft carrying troops and supplies left England for the trip across the Channel to France, while more than 11,000 aircraft were mobilized to provide air cover and support for the invasion.

Landing On the Beach

At dawn on June 6, thousands of paratroopers and glider troops were already on the ground behind enemy lines, securing bridges and exit roads. The invasion began around 6:30 a.m. The British and Canadians overcame light opposition to capture beaches codenamed Gold, Juno, and Sword.

Omaha Beach linked the U.S. and was also the most restricted and heavily defended beach. For that reason, at least one veteran U.S. Division was tasked to land there. The terrain was difficult.

Omaha beach was unlike any of the other assault beaches in Normandy. Many planners did not believe it would be a good place for a major landing. Any advance made by U.S. troops from the beach would be limited to narrow passages between the bluffs. Advances directly up the steep bluffs were difficult in the extreme.

Utah Beach was added to the initial invasion plan, almost as an afterthought. The allies needed a major port as soon as possible, and Utah Beach would put the U.S. VII Corps within 60 kilometers of Cherbourg at the outset. The major obstacles in this sector were not so much the beach defenses, but the flooded and rough terrain that blocked the way north.

U.S. forces faced heavy resistance at Omaha Beach, where there were over 2,000 American casualties. However, by day’s end, approximately 156,000 Allied troops had successfully stormed Normandy’s beaches. According to some estimates, more than 4,000 Allied troops lost their lives in the D-Day invasion, with thousands more wounded or missing.

By the end of August 1944, the Allies had reached the Seine River, Paris was liberated and the Germans had been removed from northwestern France, effectively concluding the Battle of Normandy. The Allied forces then prepared to enter Germany, where they would meet up with Soviet troops moving in from the east.

The Normandy invasion began to turn the tide against the Nazis. A significant psychological blow, it also prevented Hitler from sending troops from France to build up his Eastern Front against the advancing Soviets. The following spring, on May 8, 1945, the Allies formally accepted the unconditional surrender of Nazi Germany.

CVAS: Meet Loki and Rusty Bolts, pets of the week

Meet Loki and Rusty Bolts, this week’s CVAS pets of the week. These are just two of the amazing animals residing at area animal shelters.

Mr. Lehman had served in the U.S. Air Force, and had retired from Amp Inc. He was a member of Mt. Hope United Methodist Church.

Born March 29, 1940 in Emmitsburg, MD., Mr. Mitchell worked as a machine operator at Harley Davidson Motorcycles in York for 35 years.

Born on March 1, 1941, Gene enjoyed playing games on the computer. When he was younger and able, he enjoyed making crafts.