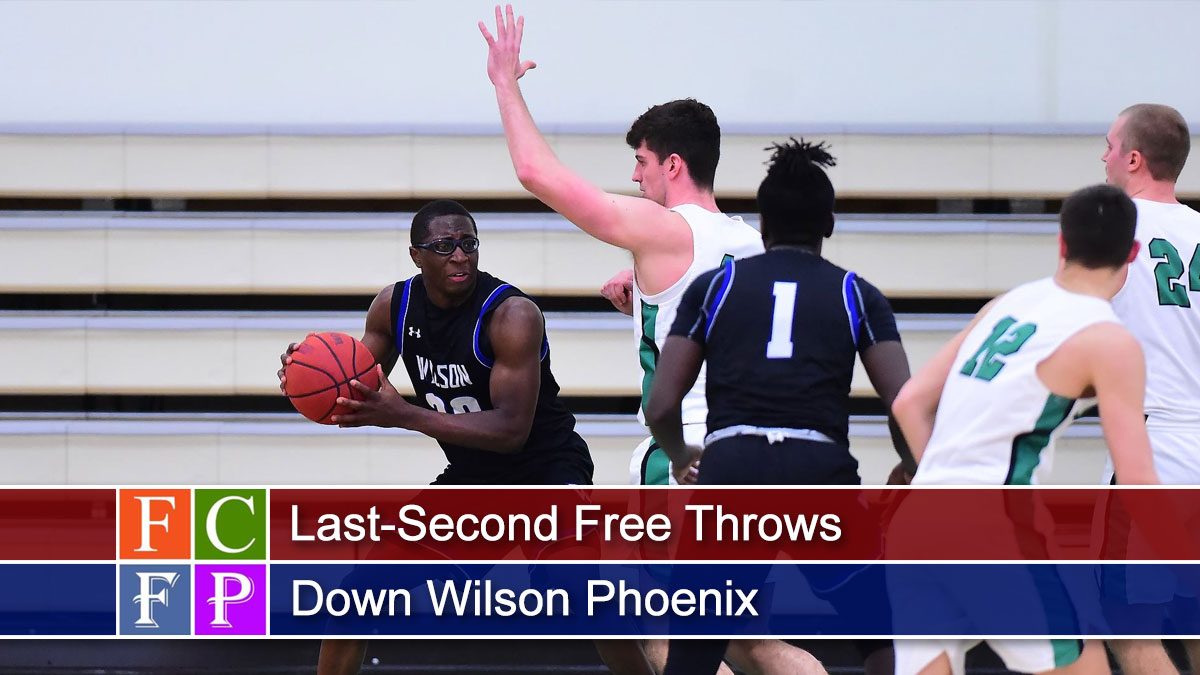 In the final home contest of the regular season, the Wilson men’s basketball team took on the Ravens of Rosemont College in Colonial States Athletic Conference play. Wilson, (10-14, 7-6 CSAC) came up short against the defending CSAC champs, by a score of 66-64. Rosemont improves to 9-15 overall and 6-7 in CSAC play.

Rosemont started the game on a 7-0 run before Anthony Desruisseau (Burtonsville, Md./Springbrook HS) got the Phoenix on the board with a three-pointer. Rosemont later took a 9-5 lead, grabbing some early momentum with an 11-0 run to move ahead 20-5 midway through the first half. Later in the first half, with the Ravens leading 40-26, the Phoenix surged their way to a 10-2 run to end the half, including a buzzer-beating three from Christian Evans (Baltimore, Md./Our Lady Of Mount Carmel). Wilson finished the half shooting 34% from the field and 27% from three while the Ravens shot 60% from the field and 41% from three.

Five minutes into the second half, Rashaan Bean (San Antonio, Tx./Forest Park) knocked down a three-pointer to bring the Phoenix within one of the Ravens. Wilson took the lead with two free throws after Desruisseau was fouled on the next possession. The Phoenix later extended their lead up to six, but the Ravens came right back to get within one.

With just under five minutes to play, Rosemont took a 61-57 lead after a big three-pointer. That three, followed by another bucket and a free throw for the Ravens, put them in the lead 64-57 with 3 minutes left. Adrian Thomas (Germantown, Md./Northwest HS) drilled a three for the Phoenix minutes later before Christian Evans pulled down an offensive rebound and scored on a layup to put Wilson down two.

The Phoenix came up with a huge stop on the defensive end as Thomas raced the other way trying to tie the game. Thomas was fouled with 18 seconds left and knotted things up at 64 with two huge free throws. Rosemont called a timeout and decided to hold for the final shot of regulation. Rosemont’s Kahleel Henry picked up the ball and was fouled while attempting a last-second shot. Henry sank both free-throws to give his team a 66-64 victory.

Wilson ended the game shooting 33% from the field while hitting on just 23% of their three-pointers. Zachary Powell (Manassas, Va., Osbourn) led the team with 14 points and 9 rebound. Rashaan Bean followed with 10 points and 7 rebounds. Christian Evans added 8 for the Phoenix, and Anthony Desruisseau finished with 7. Adrian Thomas ended the night with a team-high 5 assists.

The Phoenix will travel to Cairn University on Saturday for the final game of the regular season. Tip-off is 3 p.m.

Christopher Brunner is the Sports Information Assistant at Wilson College

Ethan Larsh - April 6, 2020 0
Live music venues are shutting down to COVID-19, leaving many musicians who rely on playing gigs for income in a bad spot. But aWaynesboro musician has a temporary solution, for both himself and his fans.

Trojan Boys Basketball: It Was a Tremendous Season